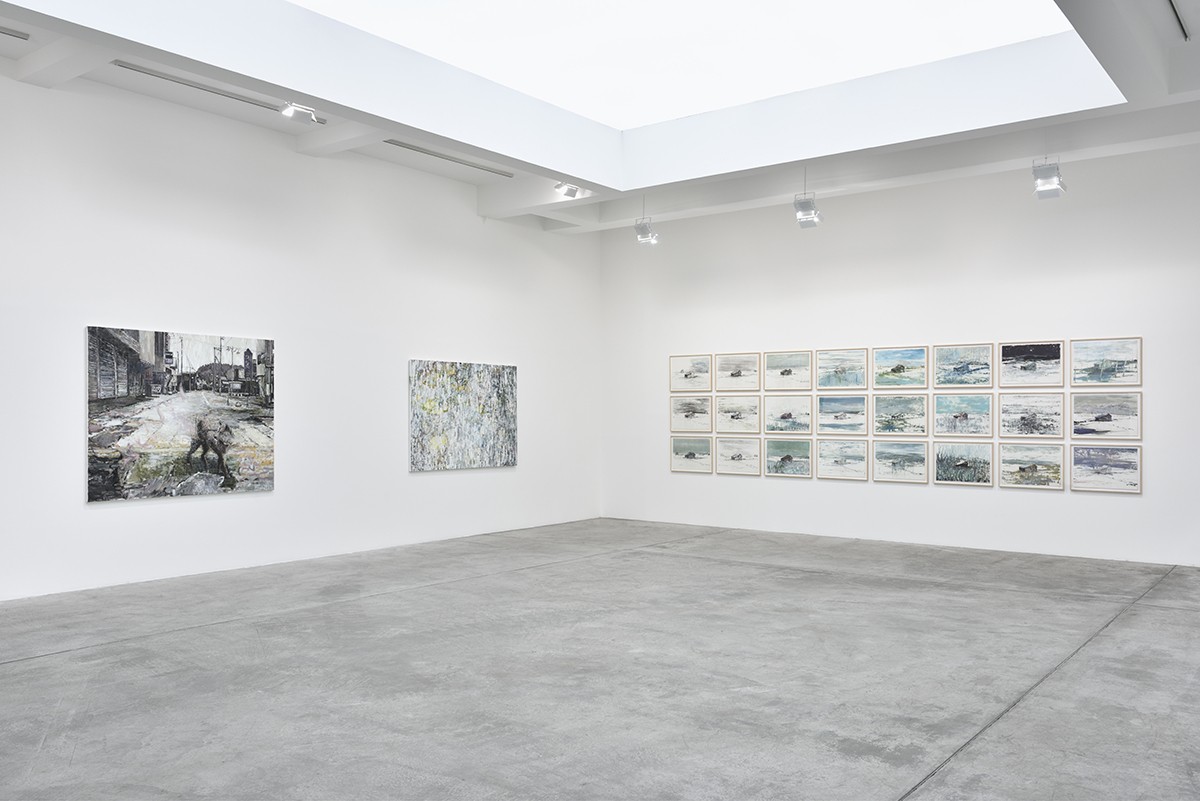 “When I’d been in the East, I’d had a strong desire to leave; but when I was out, I felt completely lost.
And some years later I started to draw, and then I would draw what I could remember from my childhood.”
-Sabine Moritz

Galerie Marian Goodman is delighted to announce an exhibition of new works by Sabine Moritz. For this event, a two-volume catalogue encompassing more than seventy five reproductions, a conversation between the artist, Etel Adnan, and Hans Ulrich Obrist, as well as a poem by Etel Adnan will be published.

Dawn features recent oil paintings and, for the first time, a series of seven abstract works. For Moritz, painting is a lengthy process: it is not unusual for her to delay working on a painting for months, even years. Indeed, she confesses: “I build-up, I add, maybe erase, and then add some more layers. I watch my paintings for a very long time, and then I see, “Oh, I have to add more or I have to change something.” Nevertheless, they get ready.”

Sabine Moritz often creates two paintings deriving from the same inspiration. With Ghost Town 1 and Ghost Town 2, she used a photograph published in the newspaper following the aftermath of the Fukushima disaster. The two works represent a dog in an abandoned city, but the first distinguishes itself from the second by having tighter framing and greater density of paint. Paradise (Deception Island 2) and Dusk address similar subjects—a ship off the coast of a mountainous landscape—but the color palette and stylistic approach differ. These paintings exude a sense of tranquility, and evoke a feeling of melancholy and lingering. The critic Christine Mehring notes that suspension of time is a force majeure in Sabine Moritz’s artwork: “real time is deferred for Moritz’s characters in the same way as it is for the audience when it views her work and for the artist when she makes it.”

Flowers, especially roses and lilies, are one of the most prominent themes found in Mortiz’s paintings. “I often draw or paint flowers that I have in my studio, and the painting of these flowers is a representation of the present, in which you find yourself thinking about distant times, as in a sort of daydream.” Two Peonies and Orchid are accompanied, for the first time, by two “vanities.”

The exhibition also includes an exceptional ensemble of works on paper, notably the series Storm, featuring an abandoned cabin. The artist photographed this small structure while on a walk near Munich before representing it on paper with graphite. A dozen years later, she reproduced this drawing through lithography, with each print growing stronger in color. This process enabled her to create multiple versions of the same scene, reflecting variations in the environment, lighting, and atmosphere she imagined.

Moritz frequently reiterates the same motifs in her art, as we have seen in her earlier works on helicopters and warships. Throughout her oeuvre, no one image ever seems inert. Varying a recurrent theme may also be an attempt to counteract the persistence of fading memories. In this case, the cabin takes on a symbolic dimension, as a container of memory.

Hans Ulrich Obrist highlights that: “Sabine’s work is very much concerned with memory, personal as well as historical.” Her new series Laboratory is a fascinating and detailed exploration of a fictive place linked to memories of her youth.

These drawings are the continuation of a series started in 1993, bearing the same title, for which Moritz was determined to recreate her chemist father’s laboratory where he worked when she was a child, and where he was also the victim of a fatal accident. Regarding her new drawings, Moritz elaborates: “I try to imagine different rooms. These rooms do not exist in reality, (...) but in my mind they are situated around the place where my father worked. (...) In the drawings, the rooms look quite empty, with strange surfaces and objects.”

The drawings, nonetheless, resemble those completed over twenty years ago. For both series, “the drawings in particular stage a stark contrast between seductive color and bland off-white, minute detail and gaping holes, precision and blankness, zoom and crop, seen and unseen, presence and absence, information and the lack thereof. Tangential objects and spaces – Bunsen burners and test glasses, sinks and showers and tiles, windows and–displace the brutality of the accident Moritz knew so little about. In that sense, this body of work decidedly transcends the personal story that inspired it.”

Sabine Moritz was born in 1969 in Quedlinburg, between Hannover and Leipzig in East Germany. As a child, she lived in Lobeda near Jena. Before the fall of the Berlin Wall, she immigrated with her family to West Germany, which made her feel like an exile. She first lived in Darmstadt, then Offenbach and Düsseldorf, where she studied at Hochschule für Gestaltung and at Kunstakademie, respectively. Today, Sabine Moritz lives and works in Cologne.

She has had solo exhibitions in Germany, France, and the United Kingdom. In 2013, her work was exhibited at the Foundation de 11 Lijnen in Oudenburg in Belgium. Her work has also been published by Verlag der Buchhandlung Walter König as well as Heni Publishing.

The exhibition catalogue will be available at the opening on Thursday October 27th. The evening will start at 6pm, with a poetry reading by Etel Adnan at 7pm, followed by a presentation of the publication by Hans Ulrich Obrist.
www.mariangoodman.com