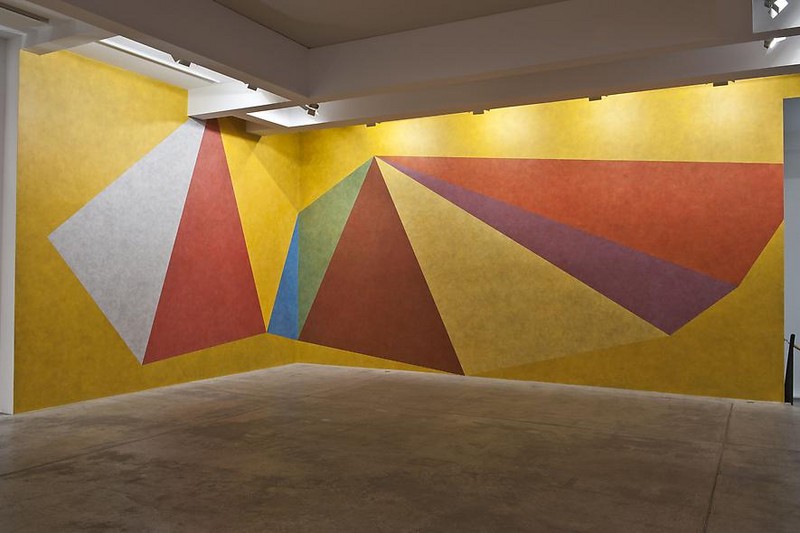 Galerie Marian Goodman is very pleased to present the first solo exhibition of Sol LeWitt’s iconic Wall Drawings in Paris in 10 years, organized in collaboration with the artist’s Estate.

The exhibition will include four works first conceived between 1985-1994, consisting of floor to ceiling pyramids constructed of multiple facets, set against uniform backgrounds. Each work is drawn directly on the walls in successive layers of delicate ink washes, alternating in yellow, red, blue and gray. It is no accident that the results recall Renaissance frescoes since LeWitt first developed this technique after moving from New York to Spoleto, Italy in 1980. Fascinated by the works of the painters of the Trecento and Quattrocento, LeWitt was quoted at the time he lived there as saying that he wanted “to produce something [that he] would not be ashamed to show Giotto.”[1]

Sol LeWitt, born in the US in 1928, is often considered the father of conceptual and minimal art. LeWitt developed his first Wall Drawing in 1968 and completed more than 1200 by the time he died in 2007. While LeWitt is best known for the Wall Drawings, his practice also included an enormously influential body of work in sculpture, drawings, prints, photography and books.

Perhaps Sol LeWitt’s greatest achievement was to liberate the work of art from the hand of the artist. Believing the idea itself mattered most, he developed a personal grammar of line, color and form that he could use to transcribe his ideas into instructions to be carried out by others. As such LeWitt opened his practice to include countless ‘collaborators’, as he called the drafters and artists who would come to participate in, and execute, his works all over the world.

In this spirit, our exhibition has been made possible with the participation of eight young artists, mainly students at the Ecole nationale superieure des Beaux-arts de Paris, who have worked alongside several longtime LeWitt drafters for almost four weeks to complete the four works on view here.

Concurrent to this exhibition of Sol LeWitt’s Wall Drawings, we are also presenting the first survey of Sol LeWitt’s editioned works published by Mutiples, the edition company founded by Marian Goodman in 1965. Marian Goodman Multiples published an extraordinary body of over 200 etchings, lithographs, silkscreens, woodcuts and aquatints that have never before been exhibited in unison. Seen together, they form a succinct illustration of the most important formal developments in LeWitt’s work from 1973 to 1991.

In 2012 Sol LeWitt’s wall drawings were the subject of two concurrent survey exhibitions: Works in black and white are currently being shown at the Pompidou Metz, France (on view until July 2013), while works in color were shown at the M-Museum Leuven, Belgium. He is also currently the subject of a monumental exhibition of 105 Wall Drawings at Mass MOCA in North Adams, Massachusetts, US. To complete this show, which opened in 2008, and will remain on view through 2033, required the efforts of 65 artists working for 6 months.

To highlight our Paris exhibition, and the recent shows in France and Belgium, we will host a reception featuring a talk on the work of Sol LeWitt by Béatrice Gross, curator of the joint exhibitions in Metz and Leuven, at the gallery on Wednesday, November 21st at 7 pm.

Our next exhibition will be Julie Mehretu: Drawings, opening on Friday, February 1, 2013.