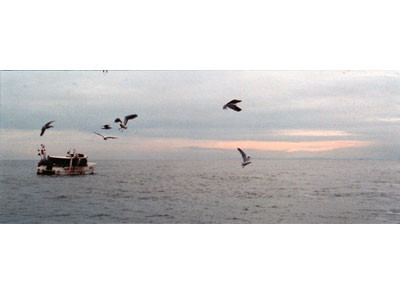 Marian Goodman Gallery is very pleased to present Tacita Dean’s new film Amadeus (swell consopio), which will be on display at the gallery from the 11h September to the 18th October 2008.

Amadeus (swell consopio) is a 50 minute silent anamorphic film of the crossing of the English Channel on the small fishing boat, Amadeus. Beginning in the darkness before dawn in Boulogne-sur-Mer, the film traverses the separating water between France and England arriving close to Dean’s childhood home in the former ferry port of Folkestone. 50 minutes is the current time it takes to cross The English Channel on the speed ferry and so time spent watching the film becomes the equivalent to making this increasingly infrequent passage. The deliberate silence turns the film into a piece of abstraction, no longer located in a particular time and where the sound of the projector in the room replaces the presence of the boat in the water.

Commissioned by the Creative Foundation for the first Folkestone Sculpture Triennial 2008, Dean writes: « The Channel is our local history: we have fished it, reclaimed land from it, smuggled across it, tried to keep it out or traversed it to lands beyond. We are an island people who have become too content with looking in and have let our seaport citadels rot. I have left England and to return is to return by sea. I might have set myself up badly as a prodigal, choosing a choppy inhospitable sea to cross, which incapacitated my nauseas crew into a Gustav Doré tableau, but I did as all Kentish people should do I, suffered the sea to get home. »

Tacita Dean was born in Canterbury, England; she currently lives and works in Berlin. Recent one-person shows include the Dia:Beacon, Riggio Galleries in 2008, the Solomon R. Guggenheim Museum, New York, in 2007 as the winner of 2006 Hugo Boss Prize, the Hugh Lane Gallery, Dublin, 2007 and Miami Art Central, Miami, Florida, 2007. A large retrospective of Tacita Dean’s work was shown at Schaulager, Basel, Switzerland in 2006.