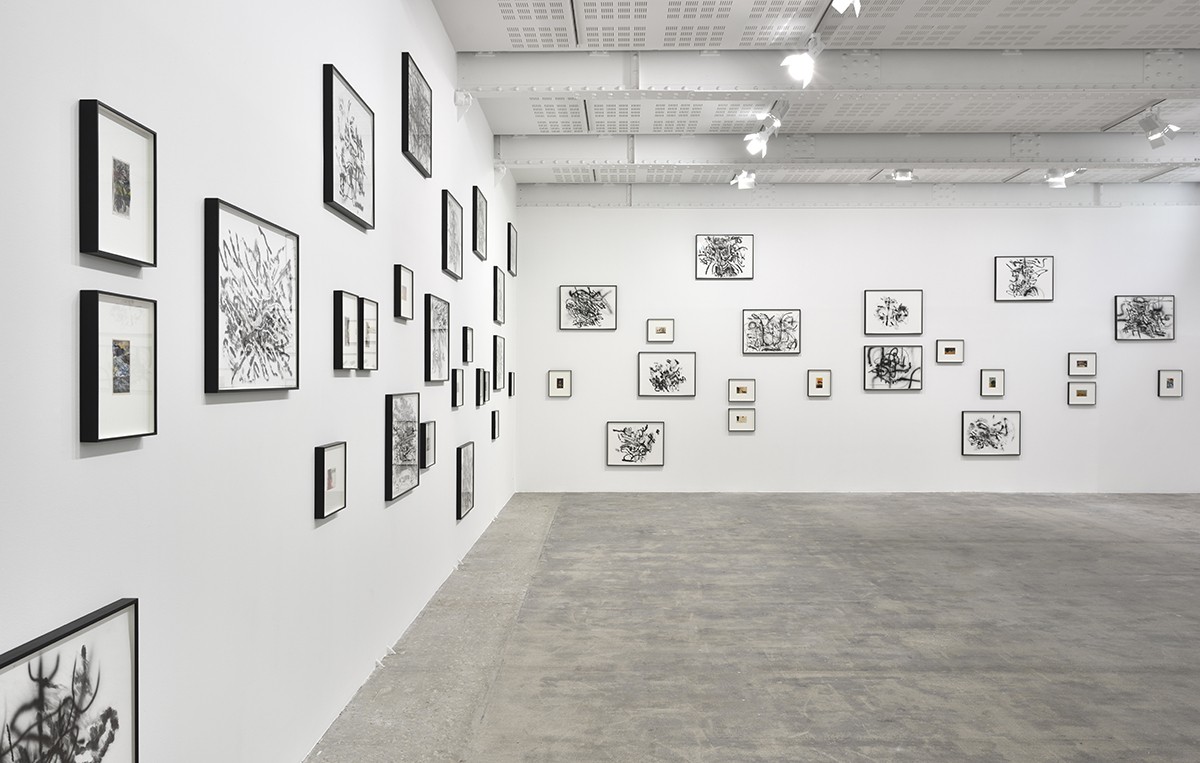 Galerie Marian Goodman Paris is pleased to present an exhibition with Tacita Dean and Julie Mehretu. This is the first exhibition to unite the work of these long-time friends, in a unique project that will debut new works made for the occasion across the gallery at 79 rue du Temple.

On the ground floor of the gallery, Dean and Mehretu present two new works emblematic of their respective practices: Suite of Nine, a series of chalk drawings on slate depicting a solar eclipse and A Love Supreme, a large painting in ink and acrylic on canvas. On the occasion of the exhibition, the two artists decided to create in parallel 45 monotypes each. Composed of 90 works covering the walls of the gallery’s lower level, the installation Monotype Melody (ninety works for Marian Goodman) reflects a unique bond shared by the artists.

Tacita Dean is currently the subject of a landmark series of exhibitions in London across three venerable institutions – The Royal Academy (on view until August 12), The National Gallery and the National Portrait Gallery – a unique partnership that marks the first time these museums have presented the work of a single artist. In July 2018 the Fruitmarket Gallery, Edinburgh, will present a solo exhibition taking performance as its theme, while in October the Kunsthaus Bregenz will dedicate its Peter Zumthor building to an ambitious exhibition of Dean’s films and a new, monumental chalk drawing.

Tacita Dean was born in Canterbury, England in 1965. She has been the recipient of various awards including the Kurt Schwitters Prize in 2009, and the Hugo Boss Prize in 2006. In 2014 she became an artist in residence at the Getty Research Institute. She is a founding member of savefilm.org and vigorously campaigns to save the medium of film. Dean lives and works in Berlin and Los Angeles.

Julie Mehretu was recently the subject of a retrospective exhibition in Europe, A Universal History of Everything and Nothing, at the Serralves Museum in Porto, Portugal and the Fundación Botín in Santander, Spain. The Los Angeles County Museum of Art is currently planning a major retrospective exhibition which will open in 2019. The San Francisco Museum of Modern Art has recently unveiled a monumental painting in two parts which was commissioned by the museum for a long-term installation in the main entrance lobby of the museum.

Mehretu was born in 1970 in Addis Ababa, Ethiopia and raised in Michigan, USA. She has received international recognition for her work, including, in 2005, the American Art Award from the Whitney Museum of American Art, New York, and the prestigious MacArthur Fellows Award. In 2015 she was awarded the US Department of State Medal of Arts Award. Mehretu lives and works in New York.
www.mariangoodman.com