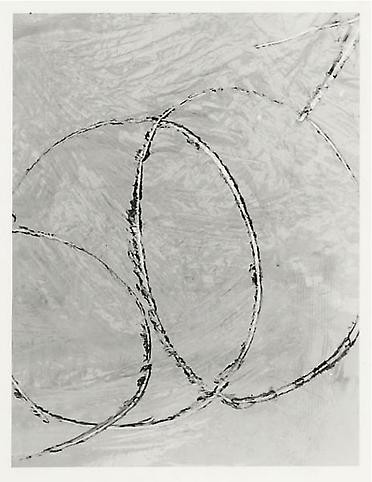 Anthony Pearson works with photography and sculpture to create a formal and conceptual matrix. His varied works interlock on both a procedural and physical level. Individual pictures and objects exist in accord with one another. This is perhaps most evident in the artist's Arrangements, in which he creates pairings of bronze sculpture and photography that resonate simultaneously on a material, pictorial, and phenomenological level.

The artist's Flares, which in the case of this exhibition, act not only as singular pictures, but also as components of larger Arrangements, employ digital transmission to create an abstraction. Sourced from a light leak in the artist's camera, the concentric forms of the Flares shift with the compression of the image. In this exhibition, many of the Flares are presented as vertical planks throughout the gallery.

Three suites of the artist's Solarizations act as small-scale analog counterpoints to the Flares. The artist constructs the subjects of these silver gelatin prints, by creating drawings on foil, and subsequently photographing these drawings. The solarization of the final photographic print creates an additional layer of procedural transmission, abstracting the image even further from its initial source.

In this exhibition the artist will debut a new set of works entitled Opaques. These photographs consist of images of the backsides of the renderings that were the source for his solarizations. The Opaques are essentially images of the trace of the artist's brushwork pushing through the foil on which he works.

By presenting an enlargement of the literal posterior of his drawings, the artist continues to employ his consistent exchange between the positive and negative. This interplay is found throughout the work on the level of the photographic negative, sculptural casting, and mold making. By imaging the Opaques as either inverted, or as blown-out, the artist presents the extreme poles of photographic tonal range.

Pearson uses a strict process-based methodology to derive all of his works, though his output presents itself as highly visceral. An overarching sense of intuition remains throughout the work, even though the creation of each work is procedural. The artist's strict systems allow for an unfolding of personal expression. Seemingly primordial works are derived from the most cognitive actions. This mercurial range, from the procedural, to the material manifestation of the work, is broad and transformative. This aforementioned vast trajectory, from conceptual genesis to concrete formalism, is the principle act of his work.

Anthony Pearson lives in Los Angeles and received his MFA from The University of California Los Angeles in 1999. In 2008 he had a solo exhibition at Midway Contemporary Art in Minneapolis. A catalog entitled solarizations was recently published by Midway in conjunction with the exhibition. Forthcoming exhibitions include a three-person show with Barbara Kasten and Erin Shirreff at Shane Campbell Gallery in Chicago in Spring 2010 and a solo exhibition at David Kordansky Gallery in Los Angeles in Fall 2010.
www.marianneboeskygallery.com