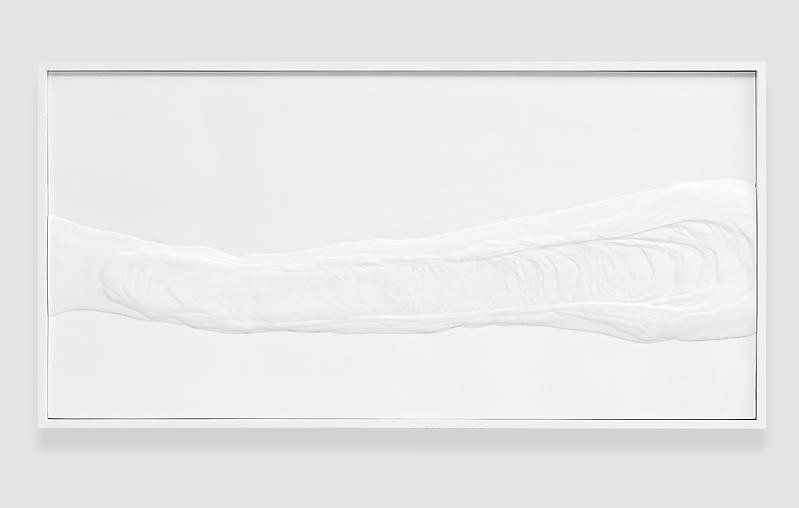 Marianne Boesky Gallery is pleased to present an exhibition of new work by Anthony Pearson. This exhibition features lighting design by Keefe Butler. This is the artist’s second solo exhibition with the gallery.

Optical nuance and the handling of materials are at the core of Pearson's practice. His work engages light and atmosphere as a way of revealing a highly consistent formal vocabulary. For this exhibition, Pearson again introduces new iterations of scale and form, expanding on previously established precedents in his work. Rolled and bundled volumes in bronze relief, as well as highly finished Plaster Positives of varied scales, are combined with previous mainstays of Pearson’s practice, his Flares and Solarizations.

As with all of Pearson’s work, it is not only the objects themselves, but the relationships among the objects and the overall environment in which they are presented, that dictate both the formal and conceptual conditions of the work. In this exhibition the arrangement of specific works become additionally activated by an augmentation of the gallery's lighting.

Pearson’s abstract forms allude to the body, landscape, and to art history itself, yet remain undeniable in their material primordial fact. He engages a process driven studio practice that pushes through drawing, photography, painting and sculpture to arrive at something simultaneously ancient and futuristic.

His work is built from the substantive facts of materials such as wood, plaster, metal, clay, as well as the photochemical play of silver gelatin prints. The use of these materials is activated by both a free-form expression and a regulatory logic, but the experience of his objects and images themselves is the ultimate concern. They are designed to foster physical closeness and slow, attentive absorption. In terms of both looking and making, temporality lurks in each of the conceptual recesses of his ongoing project.

The result is an idiosyncratic body of work that is held together only by the pragmatism of its own framework. Using both the analog and the digital, and the classical and the synthetic, Pearson creates an intuitive structure that allows viewers to enter into an open, lyrical, meditative engagement with sensuality and phenomena. This sensuality and phenomena exist both within and beyond the reference of mechanized human intervention and organic from-earth-itself cultivation. For Pearson, the liberation of the artist's gesture and chosen language is best understood and reconciled through categorical classification. The studio is the ground in which both personal expression and absolute order is established.