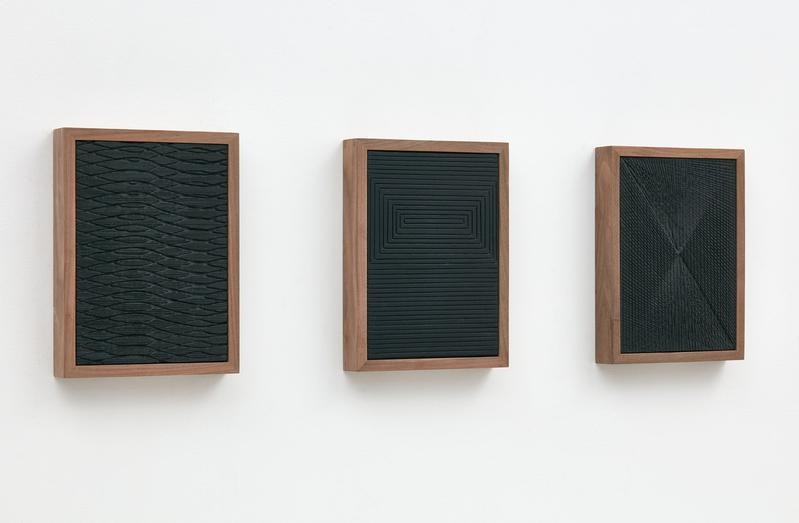 Marianne Boesky Gallery is pleased to present an exhibition of new work by Anthony Pearson. This is the artist’s third solo exhibition with the gallery. The exhibition features lighting design by Keefe Butler and is on view from November 19 through January 16, 2016, with an opening reception on Thursday, November 19, from 6–8 p.m.

Pearson uses a range of methods and media to create works that offer a meditative experience by way of an extreme sensitivity to materials. His practice originated in photography, and by experimenting with the formal limits of the medium, Pearson has constructed a visual vocabulary that has expanded into sculptural materials such as gypsum cement, bronze, steel, and clay.

On the occasion of this exhibition, Pearson will be presenting two bodies of work: Plaster Positives and Etched Plasters. These works simultaneously embody qualities of sculpture and painting and use subtle relief to employ both seemingly infinite detail and a broad spaciousness. The work is built by way of repetition in both method and movement, with each pour and mark made by hand. The structure of Pearson's practice results in a subtle interplay between individual works that eventually resonate as a harmonic whole.

To create these works, the artist tints Hydrocal (a high-strength gypsum cement) and pours it into a shallow, planar mold. In his Plaster Positives, multiple pours of the material and careful movement produce tonal gradients through layered accumulation. The resulting surfaces resemble fluid pools, creating an ethereal and placid image that at times references the human body.

In his Etched Plasters, a flat surface of Hydrocal is scored by hand using a variety of implements and an array of mark-making systems. Close-knit networks of lines, orderly grids, and radiant forms, which are at times reminiscent of the natural world, engage to create an intricate relief. Light interacts with these surfaces to cast fine shadows and reveal a delicate sheen, with the subtle face of the work constantly changing as the viewer navigates the room.

The qualities of both the Plaster Positives and the Etched Plasters extend beyond pictorial space. Pearson’s works are sensitive to the environments in which they are presented. Each poured or etched composition is reactive to light; therefore the ambient surrounding throughout the exhibition informs a phenomenological experience. This places Pearson's work within the legacy of previous generations of West Coast artists who have responded to the natural light that California conjures. In an age of continuous and rapid information, mobile devices, and short attention spans, Pearson's work offers a respite, a critical breathing room in which space and time slow down—for in the individual works and the exhibition as a whole, perception and contemplative experience are the primary concern.
–
Anthony Pearson (b. 1969) lives and works in Los Angeles. He received his MFA from UCLA in 1999. His work has been the subject of solo exhibitions at the Contemporary Art Museum, St. Louis (2012), and Midway Contemporary Art, Minneapolis (2008). Forthcoming exhibitions include Shane Campbell Gallery, Chicago (2016), and David Kordansky Gallery, Los Angeles (2017). Pearson’s work is in the public collections of the Hammer Museum, Los Angeles; Los Angeles County Museum of Art; Museum of Contemporary Art, Los Angeles; and the Walker Art Center, Minneapolis.
www.marianneboeskygallery.com