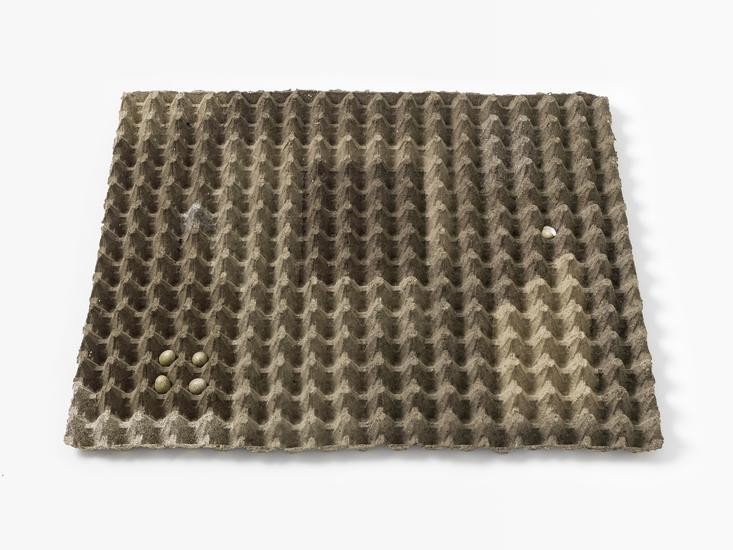 BOESKY EAST is pleased to present New Towns, a solo exhibition by Berlin-based artist Björn Braun. This is the artist’s first solo show with the gallery and will be on view from November 1 – December 20, 2015 at 20 Clinton Street, New York.

Björn Braun transforms found objects, exposing the narrative potential of materials by way of slight interventions. Much of his work uses nature as a departure point as he often collaborates with birds, mice, or bees, turning the remnants of their activities – nests, burrows, abandoned eggs, and feathers – into sculptures. The process is tantamount to the resulting artwork, which is often determined by chance. For his first solo exhibition with the gallery, Braun will present a series of new floor sculptures, cast aluminum paintings, and an interactive window installation.

A minimalist sensibility presides over Braun’s work, but is upended by his use of humble, natural materials, drawing further parallels to Arte Povera. Floor sculptures, which recall Carl Andre’s grid-based floor works, are actually made from abandoned bird nests that have been boiled into a papier-mâché type material and then cast using molds of egg cartons. The eggs found in the original nests are hollowed out and placed accordingly within the sculpture. The systematic titles of the works (for example 9:5:1) reference the number of nests, eggs, and cartons used. Braun’s work also possesses a tongue-in-cheek, performative aspect of Beuysian alchemy as he often boils, mixes, and bakes organic material into their final sculptural forms. An economy of means presides over all of his work as nothing is ever wasted, only repurposed.

In a similar gesture, Braun has collected early 19th century German landscape paintings from thrift stores, which are then meticulously cast in aluminum, allowing the brush strokes and texture of the paint to show through. With one simple gesture, he turns romantic landscapes into monochromes, merging the natural with the industrial.

For the final work in the show, Braun will replace the glass in the window above the gallery’s entrance with “bricks” made from a birdseed concoction that he bakes at home. Throughout the course of the exhibition, birds will be able to peck away at the bricks, and may eventually fly into the gallery, bringing nature and art together in the most direct way possible.
-
Born in 1979 in Berlin, Björn Braun studied at the Fine Arts Academy in Karlsruhe. He has had solo exhibitions at the Kunstverein Braunschweig; Meyer Riegger, Berlin; and the Kunstmuseum Stuttgart. Group exhibitions include Museum für Moderne Kunst, Frankfurt/Main; Neues Museum, Weimar; and CAPC, Musée d’Art Contemporain de Bordeaux. Braun currently lives and works in Berlin.
www.marianneboeskygallery.com