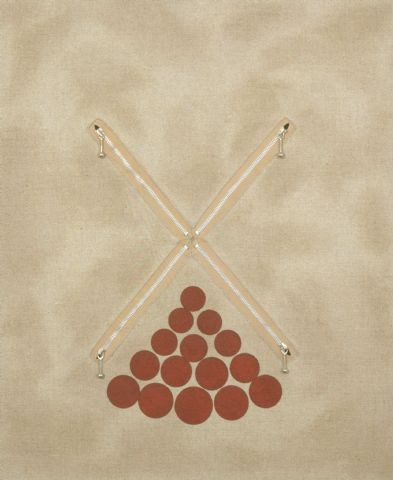 “Sometimes you just need a hole, a smudge or an X,
and then at other times—you really need the whole hog.”
DONALD MOFFETT, 2008

Marianne Boesky Gallery is pleased to announce an exhibition by Donald Moffett titled EASY CLEAN. The exhibition is Moffett’s fourth solo show at the gallery and will be on view from October 11 – November 8, 2008.
In this exhibition, Moffett brings together two bodies of work that he has been pursuing simultaneously for several years. While his themes have been consistent over time, the making of each of these groups is patently different—both visually and physically.
In the main gallery, the climate is raw. A single row of almost naked canvases confronts the viewer with a hard set of truncated glyphs. It is a lurid landscape of beautiful damage. Zippers appear to heal cuts in the surface of the works, their edges precisely stitched up. Painted black globes suggest residue left behind from imaginable transgressions. Crimson balls coagulate in dry formalities.
In stark contrast, the front gallery features works extravagantly painted. Their shag surfaces and soft holes are fat with indulgence and geared for pleasure. The hands-off implications of that pleasure (or, more precisely, the memory of remote and isolated pleasures) is mirrored in the brush-free execution of the works. They are made of extruded oil paint—every detail a repeated squirt.
A large survey of Donald Moffett's work will open at the Contemporary Art Museum (CAM) in Houston in 2010. HIPPIE SHIT, Moffett's 2005 installation at Marianne Boesky Gallery, will be re-presented in Berlin at the Neue Gesellschaft für Bildende Kunst (NGBK) in 2009. Recently, his series WHAT BARBARA JORDAN WORE was included in Tacoma Art Museum's "Sparkle Then Fade," and the Museum Ludwig in Cologne exhibited his drawing cycle MR GAY IN THE USA in "The Eighth Square."
Donald Moffett: EASY CLEAN, will be on view at Marianne Boesky Gallery at 509 West 24th Street (between 10th and 11th Avenues) through November 8, 2008. Hours: Tuesday through Saturday, from 10:00 A.M. to 6:00 P.M.
www.marianneboeskygallery.com