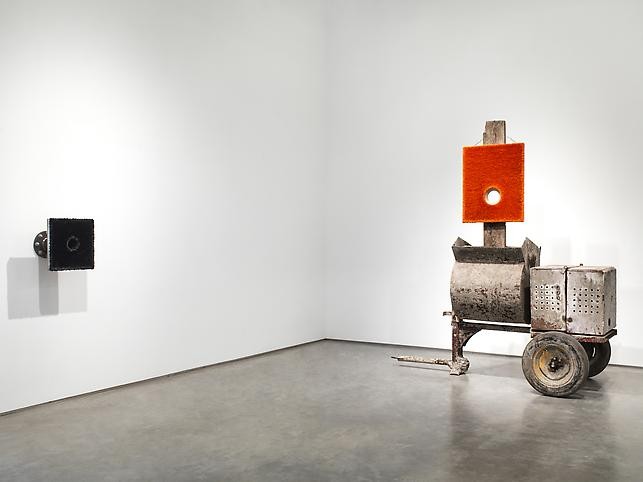 A little domestic tragedy happened last winter during a snowstorm. The largest tree on the block, an old Bradford Pear, fell into the street in front of our house. It was heavy and shocking to see splayed out horizontally, ruined and dying at the foot of the stoop. The city sent out a crew of skilled arborists to chainsaw and chip it into manageable remains to discard or recycle. This was all an event that drew the curiosity of neighbors. There was an intensity in their observation that was instructive. People asked the arborists if they could take parts of the tree. I asked one man who was dragging off a big log if he had a fireplace. He said, “No, I don’t. It is the texture and the weight that I want.” And he staggered off with what he missed. I know what he means. Texture and weight. Neither play a part of any consequence in our new digitized lives. Yes, texture and weight.

Marianne Boesky Gallery is pleased to present its fourth Donald Moffett solo exhibition. The artist’s paintings are deceptive in their shifting of our expectations in what a traditional painting should be. They are oil on panel to be sure, but not applied with a paintbrush or fingers or even dripped. Rather each blade, hair, fiber of paint is methodically extruded on to the surface resembling other mundane objects: grass, turf or carpet covered in paint, certainly not just oil paint itself? But the artist had already dispensed with our conceptions of the medium more than a decade ago. This new body of work is yet another shot across the bow in Moffett’s ever broadening definition of painting.

Moffett describes a persistent feeling of the wall having let him down - its very two-dimensions failing the work by denying the viewer a complete experience. So rather than continuing to lament the wall’s nature, the artist moved the painting itself away, suspending the work in the center of the room or holding it at arm’s length from the wall. Moffett thereby exposed the third-dimension previously hinted and teased at with his milled holes and cutouts. For Moffett this evolution does not propel the work into the realm of sculpture, rather it is a continuing exploration of the possibility of painting, a continuum as opposed to a conversion. The structures that hold the works are in some cases more correctly described as contraptions. Some are industrial, others found objects and others might adorn a garden in another life. These apparatus, utilitarian on their own, become formidable presentations striking a seemingly impossible balance with the finely cultivated lush paintings. Together they almost transform the gallery space in to a holy place, appearing at once like altars and martyrs. Moffett further exploits the inherent tensions in these pairings with the suggestion that mere straps and chains, weights and measures are entrusted to suspend the delicate work, an elegant equilibrium of texture and weight.