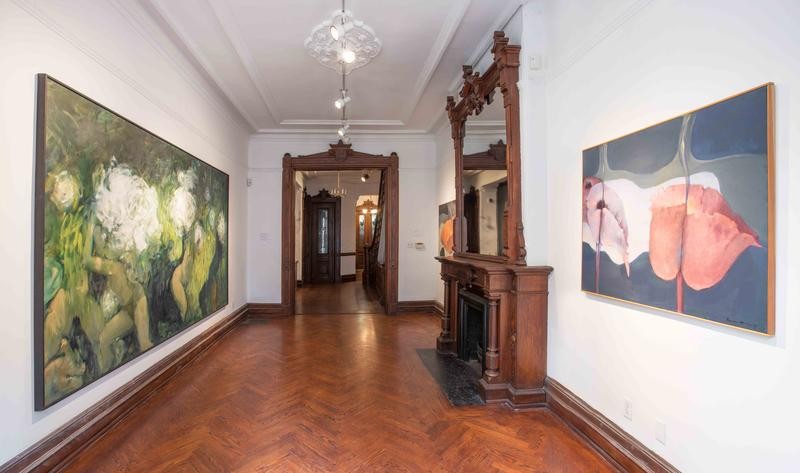 Murmurs: They are sounds from outer space and they bring all kinds of echoes into my paintings—planetary echoes, mythical echoes, memory echoes, all the echoes of constellations with their streaking creatures and a crescent moon to cradle me; only that I know perfectly well it is an orb that rocks no one and nothing but its own cold mystery. Just the same this space is, I hope, as endless as any space can be in a painting that listens to its murmurs.

Alison Jacques and Marianne Boesky are pleased to co-present Murmurs, a solo exhibition of works by Dorothea Tanning curated in the distinctive architecture of Marianne Boesky Gallery at 118 E. 64th Street.

This exhibition was organized in collaboration with the Estate of Dorothea Tanning and its beneficiary, the Destina Foundation. The Dorothea Tanning Foundation is also acknowledged for its dedicated efforts to preserve the artist’s legacy. We are especially grateful to J. D. McClatchy, the eminent poet and literary critic and a dear friend of Tanning’s who has written a text for the exhibition. His appreciation of Tanning’s reading of poetry provides invaluable insight into the work of the artist, whose entire oeuvre may be seen as poetry.

The paintings, watercolors, drawings, collages and objects included range from 1960 – 2005, and were chosen from the artist’s personal collection. This selection offers a view of some of the “mythical echoes” found in Tanning’s work. Like ancient myths and legends, these works depict figures in moments of euphoria, despair, love, seduction, jealousy, conflict, longing, delirium and reverie.

Tanning first achieved recognition as a Surrealist painter in New York in the 1940’s, and later in Paris in the 1950’s. During the 1960’s, her paintings transitioned from dream-like scenes and portraits of the subconscious into abstract and fractured imagery that in some respects delved more deeply into a Surrealist approach. “I was reassured in the belief that there are realities that have nothing to do with logic; and that diving into the subconscious—I call it surconscious—is the way to find them”.

Murmurs, a pivotal work for which the show is named, was painted in 1976, at the midpoint of her career and the year in which her husband, the artist Max Ernst, died. As she explained, this work depicts the artist cradled within a space she created for her own personal mythologies. Not long after Ernst’s death, she left France and returned to New York, where she worked through the late 1970’s and 80’s, resuming a more figural representation. Canvases like Hail, Delirium! (1979), Reality (1973-83), Heartless (1980), and the monumental On Avalon (1987), demonstrate her lifelong efforts to express archetypal emotions and experiences.

Somewhere around 1962 or 1963, in Paris, I was intrigued by a reproduction in one of those obscure art catalogues of a painting showing a field of flowers... I cut out the picture and every now and then I looked at the white flowers, which began to take on larger and, above all, profounder implications. They grew before my eyes, they swam in an unearthly tourbillion of total enigma. Though still heartbreakingly flowerlike to my gaze, they were showing signs of power, the power to anaesthetize and to invent other ways of living....

Twenty-two years later, and in New York, those white visions were still haunting me. They were moreover getting all mixed up with my immersion, indulged in over the years, in such ancient esoterica as legendary islands of death or paradise (same thing) during what the French so nicely call la nuit des temps. I began in 1984 to paint on a large canvas, in greens and whites, something I felt about those spirits, which may have been flowers but also novas, tears, omens, God knows what, contending or conniving with our own ancestral shape in a place I'd give anything to know. During the painting of the picture, a matter of three years, it went through a number of transformations.... Late in 1987 it was finished.”

In her later years in New York, Tanning turned her attention to her own writing, and by the time of her death in 2012 at the age of 101, she had become an accomplished poet, ultimately publishing two poetry collections. With a lifelong interest in poetry and literature, Tanning named several of her works directly after mythological subjects: Chiens de Cythère (Dogs of Cythera) (1963), La Chienne et sa muse (The Dog and Her Muse) (1964), Europa (1967), Drawing for Aura (1978), Maenad III (1986), and Dionysos SOS (1987-89). Other works, though not named directly after a particular myth, evoke the type of dramatic narratives found in them: women paired with would-be seducers in the guise of animals, or mothers protecting children from the perils of unknown forces. Her series of “frieze” drawings, with figures dancing and coupling with the abandon of Dionysian rites also refers to the narrative convention found in Classical architecture.

The echoes of myths and legends in Tanning’s work are also explored in this exhibition through poetry, with examples of poems that were especially meaningful to the artist. Many of the poets Tanning admired offered different versions of traditional mythical stories, and wrote on the cultural role mythmaking has had in helping to understand and communicate universal truths. The poems that accompany the works in the exhibition were found quoted amongst Tanning’s writings, letters, and journals, or underlined and bookmarked in the many volumes of her personal library. This selection was edited by J. D. McClatchy.