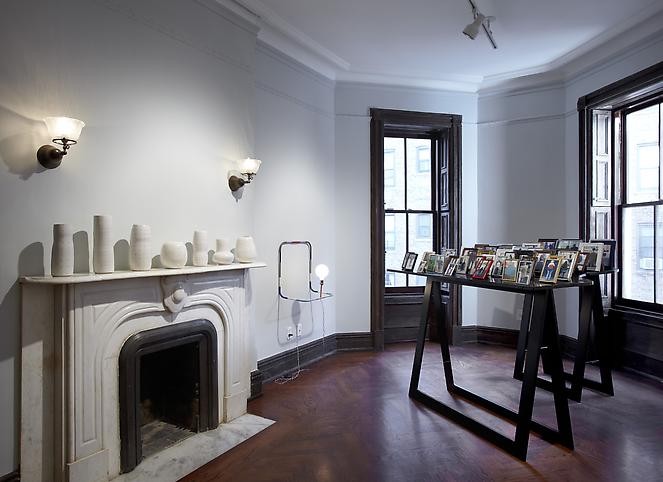 dwelling, the fourth exhibition in the gallery’s uptown location, uses the former private residence as both backdrop and point of departure. Featuring works that incorporate elements of everyday items into their various forms, both explicit and intimated, the ideas of home and domestic spaces are (re)interpreted within this object-like focus. The works, like the emptied rooms they inhabit and the corners they haunt, often become vehicles for remembrance and association distinctive to inner, personal arenas.

The concept of domestic space suggests an underlying dichotomy between the private sphere and the performative element of selecting objects with which to surround oneself. Where the private is made public, the home invites a certain level of voyeurism as each room is filled. A dual sense of recognition and discomfort can be felt in viewing the spaces of others. Thus within the word ‘dwelling’ itself, the distinct nostalgia implicit to that of ‘home,’ is not so plainly felt. One dwells at someone else’s home. One dwells over all the things and the monuments to those things that make it theirs and not one’s own.

While the domestic at times may be synonymous with the familiar and quotidian, here no such reliably knowable presence exists. The works included in the exhibition subvert the everyday and remain ultimately enigmatic despite their borrowing from the commonplace of our modern lives. They range from the vaguely utilitarian (furniture), to the more in-operational and artificial; some pieces are assembled with an unraveling material rawness while others with an uneasy slickness in the meticulous fidelity to re-production. The seemingly oblique nature of what should be readily identifiable veers in a multitude of directions – the absurd and the grave, the sentimental, the unsettling and disorienting, the sexual and psychological, the political and biographical. The result is an alienation and disquiet of walking through a reality that is not quite one’s own. A sense of distance becomes tangible where even the most banal forms can suddenly take on a foreign otherness. Inevitably one attempts to find oneself within the seemingly ordinary aspects of these works, and yet they are imbued with an inescapable awkwardness.
It is the anxiety of realizing that the objects, resemblance to the familiar aside, are not ‘real’ objects for utilization in the domestic realm.

In playing upon objects that fail to function, or exist as simulacra in place of the real, the works on view become shells, much as the private interior spaces become the shells, the very vessels and voids of memory. A sense of passing becomes evident—of time, of the transition from room to room, of the associations that trail behind. Traces of former selves, of childhood, of lingering vestiges of the past intertwine all that has gone before, meanwhile coloring the present.