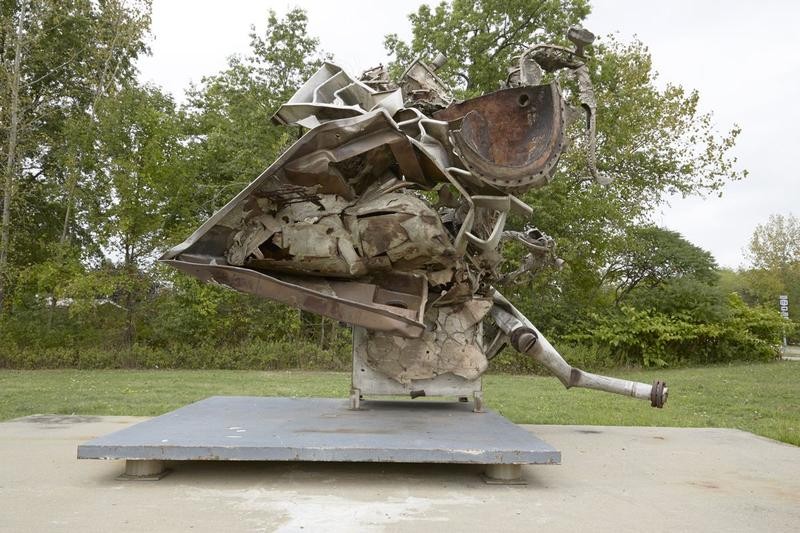 Marianne Boesky Gallery is pleased to present Frank Stella Sculpture, the artist’s first solo exhibition at the gallery since joining in the spring of 2014. Frank Stella is co-represented with Dominique Lévy Gallery, New York and London. The exhibition will be on view from November 7 – December 20, 2014 at 509 West 24th Street, New York.

Since the 1950s, Frank Stella’s practice has explored the boundaries of visual language, working in the realm of abstraction to investigate the freedom and limits of physical space. Though Stella’s work began in painting, the artist has increasingly experimented with the perimeters of spatial abstraction. Today, Stella’s developed practice comprises sculptural works that maintain painterly gesture and movement, discarding the brush and using space itself as a canvas.

The works on view offer a glimpse into Stella’s dynamic output since the 1990s. Expressions of the artist’s progressive impulse, they showcase Stella’s ambitious sense of scale, composition, form and color. In the front gallery, the kinetic lines and bright hues of a Scarlatti K work (rendered using rapid prototyping or 3D printing) temper the rough steel of Creutzwald. These intimately scaled examples give way to the monumental pairing in the main gallery: Fishkill, from Stella’s Hudson River School series, and Puffed Star II, from the artist’s most recent endeavors. Here, rugged grandeur exists in harmony with polished elegance. This co-existence of the built-up and the stripped-down conveys the productive tension at the heart of Stella’s practice, a prolific forward-moving trajectory that continues to challenge the artist’s own aesthetic resolutions.

Frank Stella was born in Malden, MA in 1936. He studied Painting at Princeton University, graduating with a degree in History. Upon exhibiting his Black Paintings in the seminal Sixteen Americans at The Museum of Modern Art, New York in 1959, Stella’s first solo exhibition took place at Leo Castelli Gallery, New York in 1960. Since then, the artist’s serial practice – comprising the Aluminum Paintings, Concentric Squares, Irregular Polygons, Polish Villages, Cones and Pillars, and Moby Dick, among many others – has been presented globally at institutions and galleries alike. The youngest artist ever to have a retrospective at The Museum of Modern Art, New York (1970), Stella was the subject of a second survey there in 1987. More recently, major surveys of his work have taken place at The Metropolitan Museum of Art, New York (2007), and Kunstmuseum Wolfsburg, Germany (2012). He was awarded the National Medal of Arts by President Barack Obama in 2010. A retrospective of Stella’s work will inaugurate the new downtown location of the Whitney Museum of American Art, New York in the fall of 2015. Frank Stella lives and works in New York.
www.marianneboeskygallery.com