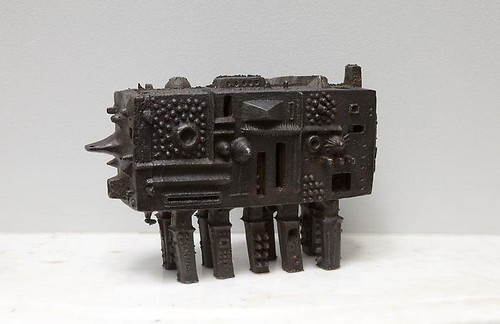 In 1952 the International Council of Scientific Unions declared 1 July 1957 through 31 December 1958 as the "International Geophysical Year" (or I.G.Y.) because cycles of solar activity would reach a high point during that period. In 1954 this council called for artificial satellites to be launched during I.G.Y to map Earth and study the cosmos - and as a result, the Space Race was initiated.

In the visual arts, two competing exhibitions took place precisely a half century ago in NYC within two months of each other. The Guggenheim Museum opened its "Inaugural Selection" on 21 October 1959, and the Museum of Modern Art opened the "Sixteen Americans" exhibition on 16 December 1959. The former exhibition acted as the initial summation of a collecting vision rooted in established objective and abstract work of mostly well known artists, while the latter exhibition pointed the art world towards the work of newcomers (six of the sixteen artists in the exhibition not yet having had a one person exhibition), including artwork using objects and images drawn from the detritus of daily life.

"Tomorrow promised to be not just another day, but a new dawn. The era's rising young political star, John Fitzgerald Kennedy, would run for president on a slogan of 'Leadership for the '60's' - the first time that the future was defined in terms of a decade, which presumed to hold out both menace and hope but in either case great change. Kennedy presented his youth as a virtue - yet another reversal of the norm - describing himself as a man 'born in this century,' keen to explore 'the New Frontier.' These currents were quickened by a series of expansive government edicts. The new United States Civil Rights Commission ordered a series of investigations on racial discrimination in voting, housing, and education. The Supreme Court issued rulings that lifted restrictions on free speech and literature.

"This enchantment with the new also galvanized a generation of artists to crash through their own sets of barriers - and attracted a vast audience that was suddenly, even giddily, receptive to their iconoclasm. New comedians--'sick comics,' some called them--satirized the once-forbidden topics of race, religion, and politics. Brazen novelists loosened the language and blurred the boundaries between author and subject, reportage and literature. Rebellious filmmakers shot improvisational movies outside the confines of Hollywood studios. Jazz musicians improvised a new kind of music that broke through the structure of chords and pre-set rhythms. A new record label, Motown, laid down a jazz-inflected rhythm and blues that insinuated black culture into the mainstream, inspired baby-boomer rock 'n' roll, and supplied the soundtrack for the racial revolts and interminglings that lay ahead...

"Yet the thrill of the new was at once intensified and tempered by an undercurrent of dread...panic over fallout shelters, fears of a 'missile gap,' and an escalation of the Cold War... It was this twin precipice--the prospect of infinite possibilities and instant annihilation, both teetering on the edge of a new decade--that gave [the era] its distinctive swoon and ignited its creative energy."