I Talk With The Spirits 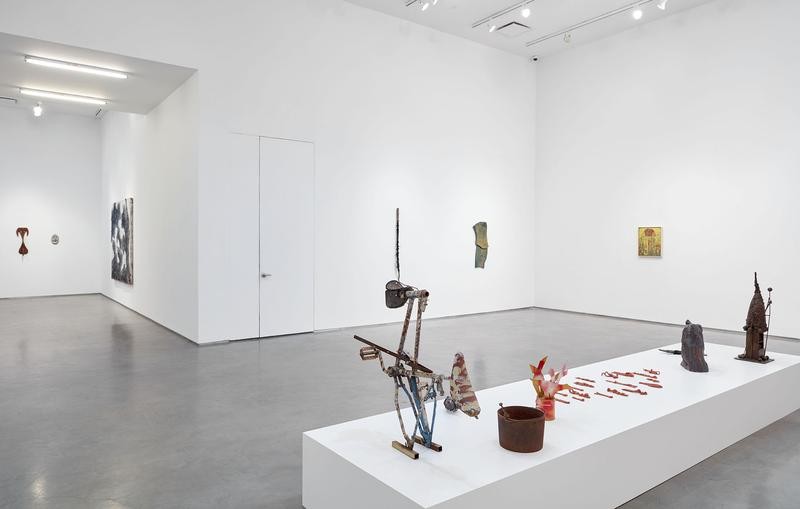 Marianne Boesky Gallery is pleased to present I Talk with the Spirits, an exhibition featuring the work of artists Thornton Dial, Jay Heikes, and Lee Mullican. The exhibition explores the enduring hold of spirituality on artists and their art throughout the 20th century and beyond, expressed across disparate generations, cultures, and artistic traditions. This show, which takes its name from a 1964 album by the great experimental jazz musician Rahsaan Roland Kirk, weaves their work together to create a nuanced picture of the ways in which the spiritual has engaged the artistic imagination. Curated by artist and writer Chris Wiley and organized by Kristen Becker, I Talk with the Spirits will be on view from June 23 – August 12, 2016.

The exhibition is grounded in the work of Lee Mullican (1919-1998), best known as one of the founders of the influential but short-lived Dynaton group, created in San Francisco in the early 1950s. Mullican was highly influenced by the art, artifacts, and rituals of Native American and Pre-Columbian South American cultures, by an interest in Surrealism, and by Zen Buddhism, to which the influential philosopher Alan Watts introduced him. The works that resulted from these varied influences blend the signs, symbols, and myths of ancient religious rites with meditative techniques of painting and drawing. Mullican's exploration of artistic transcendence through the patterns and repetitions in his abstract paintings sets the course for examining how spirituality is interpreted and questioned within Jay Heikes' and Thornton Dial's varied practices. Featured in the exhibition will be a selection of Mullican’s drawings and paintings, such as those of Kuchina dolls, totemic figures, or luminous depictions of cosmogenesis, as well as some of his ceramic or bronze sculptures.

As a self-taught artist from rural Alabama, Thornton Dial (1928-2016) wove a spiritual content through his work drawing from the surrounding Christian faith. His assemblage paintings, with their intricate construction and often-imposing scale, have their origins in his work building boxcars for the Pullman-Standard rail company, while his looping, whimsical drawings often touch on religious themes and frequently contain a motley assortment of totemic objects (dolls, discarded clothing) and spirit animals (most notably the tiger). Much of his work also addresses the trials and triumphs of black life in America, lending additional metaphoric weight to Dial’s transformation of cast-off detritus into works of art. I Talk with the Spirits includes a number of Dial’s assemblages, dating from the mid-1980s, as well as a selection of his drawings.

In contrast to Mullican and Dial, Jay Heikes’ (b. 1975) interest and engagement with spirituality comes from a place of skepticism. Many of his works appear to be artifacts from an unknown tribe, or the unfinished experiments of an alchemist’s laboratory. But Heikes himself is no neo-primitivist, or latter day alchemist. The son of a chemist, Heikes grew up fascinated by the seemingly magical aspects of scientific progress, which gave him an incredulous view of the spiritual tinkering of shamans and pseudo-scientists. Nevertheless, he has been drawn to imitate the trappings of these systems of belief, acting as a self-professed “poseur”, trying to speak in a foreign tongue. This position, though it is partially an ironic take on the well-worn trope of the artist-shaman, is also shot through with a very earnest yearning: Heikes’ work seems to suggest that he harbors the hope that he can work backwards through these objects and make his way to belief. For this exhibition, Wiley has selected a number of Heikes’ sculptures and paintings from the last three years, including several new works.
www.marianneboeskygallery.com