Image and Matter in Japanese Photography From The 1970s 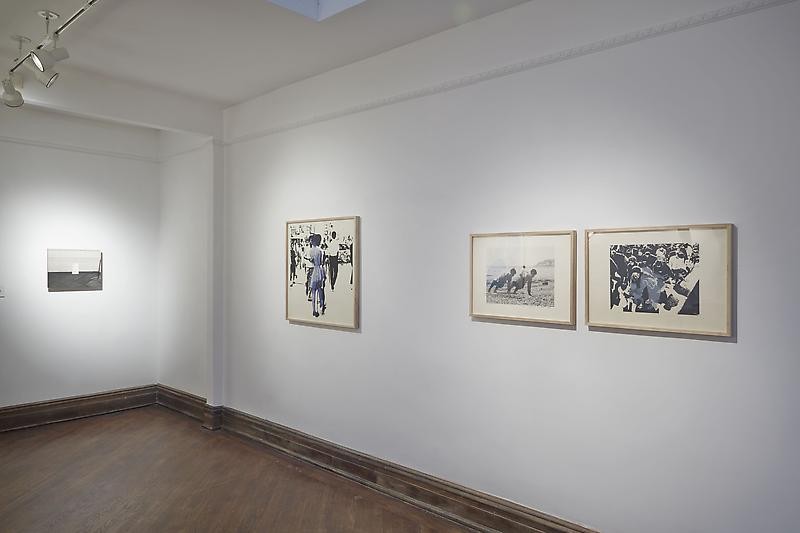 In the late 1960s and early 1970s, Japan was witness to a shift in the response to existing fundamentals previously accepted in modern art. Through the reevaluation of conventional approaches to perspective, form, and memory in the postwar era, artists Norio Imai, Masafumi Maita, Jiro Takamatsu, Keiji Uematsu, Kanji Wakae, and Katsuro Yoshida utilized photography, as well as sculpture, painting, and performance art, to challenge the constraints of these boundaries. The result was a surge of coinciding movements, centering around Tokyo, that radically confronted the reaction to the stark realism so implicit in the postwar years, while establishing photography as a progressive art form.

As Conceptualism and Pop Art materialized in the West, perhaps the first movement in this direction in Japan, parallel to Western manifestations, was the Gutai, active from the mid-‘50s into the ‘70s and best known for the emergence of an innovative approach to installation and performance. Norio Imai joined the Gutai Art Association in 1965 as its youngest member and moved from filmmaking onto exploring the fusion of photography, performance, and sculpture with a monochromatic approach to minimalism as seen in the artist’s series ‘Fragments of Images’ (1973). By transforming a commonplace object in his photographs, the artist redefined the presence of the objects depicted.

The Hi-Red Center was formed in the early ‘60s by Genpei Akasegawa, Natsuyuki Nakanishi, and Jiro Takamatsu with the intent of collapsing the dividing line between art and life. In the series ‘Photograph of Photograph’ (1973-74), Takamatsu hired a photographer to photograph prints from the artist’s personal family photo album, resulting in a fragmented narrative that provides an authentic exposure of the world as it actually is – also termed as the “naked reality.” In doing so, Takamatsu successfully disregarded traditional perspective.

Further developing these themes, the movement Mono-ha (translated as “School of Things”) came to light in the late ‘60s with the intent of emphasizing the relationship between the man-made or industrial and natural materials. Katsuro Yoshida, a forerunner of the acclaimed movement, silkscreened scenes from city streets. He used color to define commonplace objects, as seen in ‘Work “43” AB-B’ (1974). The artist considered the significance of the object and redefined the viewer’s perception of the ordinary by creating an altered state of reality.

Parallel to Yoshida’s version of an altered reality, Kanji Wakae explored the relationship between diverse expressions of various mediums – sculpture, drawing, installation, and photography. In his series ‘Paints’ (1973 – 73), Wakae surveyed the effects of repeated imagery through the employment of halftone printing, printmaking, and photography. The effect was an analytical approach to the act of viewing and an investigation of the pairing of photography and painting. This exploration was also fostered by Keiji Uematsu, who carried on Yoshida’s study by incorporating the human body. ‘Tree/Man/Rope I’ (1973) represents an attempt to depict the gravitational field that connects the viewer and the object.

Masafumi Maita’s emphasis on materiality and the viewer’s experience relates to his peers through light and the motif of water. In his series ‘Natural Line – Artificial Line’ (1971), Maita creates a high contrast landscape that allows the viewer to appreciate the medium of the photograph itself. He disturbs the serene surface of water by silk screening on the photograph, achieving a solely objective work that successfully tackles the study of perspective and materiality present in 1970s photography.
www.marianneboeskygallery.com