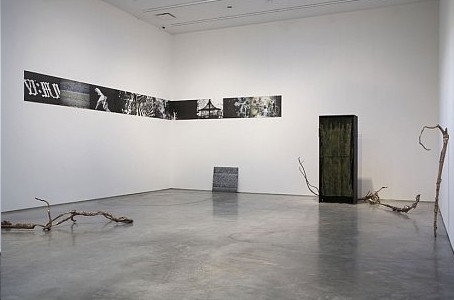 In this exhibition, Heikes continues the development of his series "So There's This Pirate..." through an installation of drawing, sculpture and wall relief. The series was conceived with a video in which Heikes, in the guise of a stand-up comedian, recounts a joke about a pirate and his disobedient parrot. The language and gestures of the joke function as a vehicle through which Heikes harnesses his visual vocabulary. From this initial video, Heikes has spun an ongoing dialogue through drawing, sculpture and installation to convey the difficulties and intricacies between an artist and his own works. With each digression and expansion of that video, the first works of which were shown at the Whitney Biennial in 2006, new questions and tensions are formed for the artist to parse. As Heikes explores the role of the art maker in his works, he also parallels it with that of the entertainer, his individual objects recalling props, serving as activation tools for the recitation of a new version of the story. In this ninth re-telling of the joke, the original tale has become barely recognizable, the narrative rendered irrelevant with no linear arc, nor final punch line.

In this newest iteration of the joke, Heikes utilizes 'common' materials such as concrete, steel, wood, burlap, and styrofoam to create oversize double hooks, cuckoo clocks, changing rooms, static 'tv' screens, and a rat trap suspended from the gallery's ceiling. The objects have a deep, fine patina that belies the raw surface of their composition. Heikes' drawings, comprised of photocopied paper, are pieced together in such a manner that recalls a storyboard unfolding. The imagery of the drawings echoes the minimal, repeated forms of the sculptures with zigzags of the tv screens, roman numerals alluding to the digital cuckoo clocks, the fabric patterns of the changing room curtains and of course, the pesky parrot. In a nod to the existential theater of Genet and Sartre, Heikes' infinite re-telling of the joke has now established a state of stasis, seemingly impossible to escape. The absurdity of such stagnancy has created an existential dilemma, which Heikes attempts to reconcile in the ongoing series.

Jay Heikes lives and works in Minneapolis and New York. Concurrent with his show at Marianne Boesky Gallery is his first solo museum show at the ICA Philadelphia, "Project Space: Jay Heikes," September 7 – December 16, 2007. Heikes was included in the 2006 Whitney Biennial and in the 2006 exhibition "Ordinary Culture: Heikes/Helms/McMillian," at the Walker Art Center, Minneapolis. He will also be included in the upcoming show "Sympathy for the Devil: Art and Rock and Roll Since 1967," at the Museum of Contemporary Art, Chicago.
www.marianneboeskygallery.com