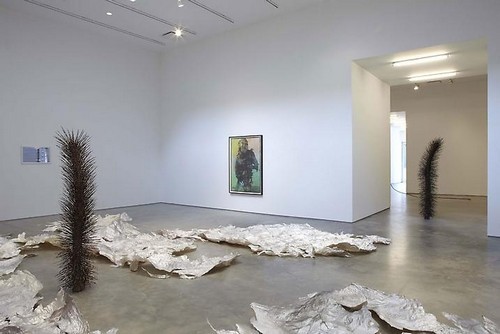 Marianne Boesky Gallery is pleased to announce the exhibition of new works by artist Jay Heikes. This is the artist’s second New York solo show at the gallery.

For this exhibition the artist presents a recent body of work in varying mediums including photography, painting, sculpture and installation. As in previous bodies of work, the pieces in Inanimate Life explore the artistic process of evolution and regeneration, as well as the themes of stasis, corrosion, texture, and alchemy. Heikes also develops the more recent theme of an inanimate life force, as the show title suggests, positioning the exhibition in direct opposition to the recent trends of participatory art while investigating a parallel sort of dematerialized art object.

In creating this series of works, Heikes was inspired by Douglas Coupland’s imagery in describing the year following the end of the world from his 1998 novel Girlfriend in a Coma. Heikes was particularly affected by the line “ten million pictures fall from ten million walls,” which alludes to the end of art and culture, as we know it. “I never put too much stock in the fact that any of these mediums were truly dying because I saw them as corpses dragging themselves through the streets to rehabilitation centers, only to be reborn more grotesque and perverse than before,” Heikes states in describing his reaction to the text.

In this exhibition Heikes will include two works of enamel and pigment on steel titled Negative Approach and Conversations With A Bitter Pill referring to the sometimes difficult dialog an artist has with his or her own work within the precarious confines of painting and sculpture. These works depict colorful zigzag lines resembling magnified swatches of fabric or the cosmological background radiation we’ve come to know as television static. In his previous works, the spray painted static lines characterized the unchanging, unmoving image. However, the applied color vibrated while the surface of the steel rusted creating a paradox between stasis and entropy. Heikes takes these works a step further by linking the image of stasis to the stillness of miscommunication that produces the collective unconscious. No longer rusting, these new works have fully regenerated and are now in a state beyond their eroded self.

In relation to the static works Heikes will display the sculpture Heartless Ascension made of iron and bronze, a metal combination that is akin to a battery corroding, constantly creating a charge through the rejection of each metals’ molecular make-up. Based on the image of a crumbling spiral staircase, Heikes aims to convey the feeling of helplessness experienced in dreams where the dreamer spends most of their time running in place. While the rusted iron and oxidized bronze embody a romanticized corrosion, the tendrils of the form relate to the endless spinning web of narrative. Previous iterations of these corroding sculptures were inspired by the use of materials commonly found in the artists of Arte Povera, specifically Michelangelo Pistoletto and Pier Paolo Calzolari. With their obsessions on the subject of the ‘infinite’, Heikes has found a like-minded group of artists to draw from.

Heikes continues to subvert his metaphors for deterioration and historical decay in a series of hand dyed palladium prints titled Civilians, depicting flannel wearing fragmented figures strewn across his studio floor. The shattered spectacles on the hornets’ nest headed figures recall the horror seen in Sergei Eisenstein’s 1925 epic Battleship Potemkin, which is commonly regarded as one of the earliest examples of montage in film. Heikes attempts to create a family tree in which the spectacles once shattered in Battleship Potemkin and further blurred in the paintings of Francis Bacon are reborn to represent a society grappling with the thought that in its attempt at pasting together events to create a sense of order, it is actually creating a monster of ruin. Heikes’ cycle of evolution and transformation is further represented by the sculpture Molting. Made of gelatin and pigment, Molting takes on the form of a large cosmic skin that has been shed and left to wither on the gallery floor. Heikes interest in Molting as a gateway to discard the baggage of the past is evident for not only its ephemeral quality but also in its likeness to scar tissue and the marks left to remind the body of past traumatic events.

The newest addition to the show hints at a departure for the artist. Influenced by the landscape of Joshua Tree National Park and the conflicted tale of a new generation that inherits a decimated landscape created by one man’s greed in Theodor Geisel’s story The Lorax from 1972, Prickly, Sickly and Thickly are three sculptures more related to dispositions and moods than to the simple representation of cacti. Using materials like hand-dyed porcupine quills and driftwood, the artist wonders himself if he’s somehow accidentally set up a system of hiring poachers in Africa to kill families of porcupines, mirroring the conflict involved in any tale of ambition.

Finally, in an attempt to illustrate how insular the artists’ endeavors can be, Outside World is a site-specific installation created as an escape of sorts. Acting as just that, a view to the outside world, Outside World is a partially obscured view of the adjacent alley through a re-imagined Mack truck radiator cover. It is the final act in a show full of personal meanderings about the way the world feels as it re-materializes into a manneristic and perverted version of itself leaving nothing but carnage in it’s path. Heikes’ aim is to create a life cycle; new work feeding off of dying, decaying work in order to be nursed back to life, only to begin its eventual demise.

Jay Heikes lives and works in Minneapolis, MN. His work has been exhibited at the Artist Space, New York, the Whitney Biennial in 2006, the ICA in Philadelphia, the Walker Art Center in Minneapolis, and at the Museum of Contemporary Art in Chicago.
www.marianneboeskygallery.com