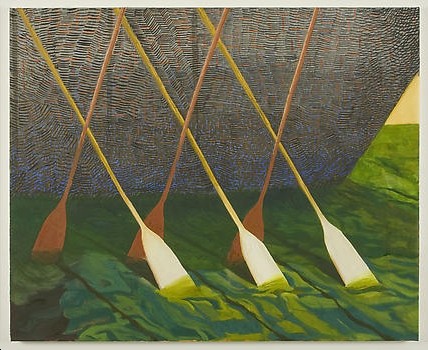 The Marianne Boesky Gallery is pleased to present Jesse Chapman's first solo exhibition of paintings in New York City. The exhibition will run from the 10th of January through the 14th of February.
Jesse Chapman's paintings are formally rigorous and reticent. Although rich with narrative potential, they withhold access. Chapman's art stands in the tradition of pitura-metaphysica, where meaning is implied but never explicitly stated. The cryptic logic that shapes these paintings, derived from their intentional structure and methodical facture, ricochets between apparently disconnected series: figures enacting ill-defined rituals, portraits, interiors, landscapes, instruments, details. Only slowly does the connectedness of the motifs insinuate itself. But when this happens, and Chapman's work and world cohere, viewers find themselves in a compelling place where omnifarious latency is subsumed by an unforeseen unity.
With unexpected mystery, Chapman's paintings portray a world historicized. His work parallels that of a growing number of younger artists (Julian Gothe, Lucy McKenzie, Barnaby Furnas, Pablo Bronstein) for whom past is intently present. In this sense, these are radically reactionary artists, moving away from an anarchically fashionable dogma, toward a place where the weight of precedent is both informative and liberating: back to a future that is yet to be.
Jesse Chapman lives and works in Hudson, New York. He received his BFA from the Art Institute of Chicago in 1999 and an MFA from Yale University in 2003. He also shows with Shane Campbell Gallery in Chicago.
www.marianneboeskygallery.com