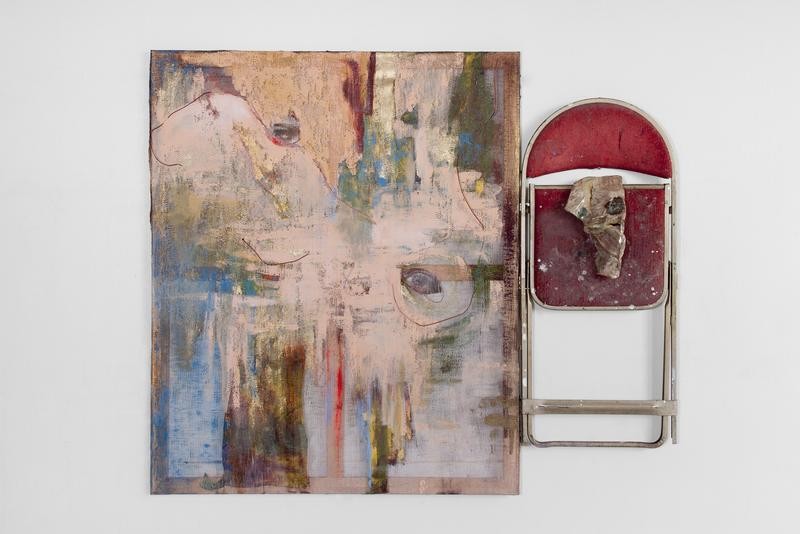 Marianne Boesky Gallery is pleased to present I Do Choose, an exhibition of new sculptures and wall works by Jessica Jackson Hutchins. This will be the artist’s first solo show at the gallery since joining in 2014. I Do Choose will be on view at 509 West 24th Street from May 9 through June 13, 2015.

The works presented in I Do Choose engage a sense of commonality between objects, bodies, and the expectations of their interaction. As evidence of the artist’s dialogue with items in her studio, these works are a means by which the artist explores the intimacy of the mutual existence between art and life. Borrowing from Mark:1:41, the title I Do Choose invokes this willing entrance into a creative relationship with the numinous, an ambitious task which results in physical manifestations of affection, humor, and desperate longing.

These new works tellingly disclose Hutchins’ expressive and intuitive studio practice, as the altered forms of recognizable objects directly exhibit the artist’s particular techniques of frenetic mark-making and material manipulation. Within the sculptural works, marks and alterations push the ceramics and found furniture toward each other, forming chimeric wholes out of disparate parts. Similarly, Hutchins’ “paintings” fuse stretcher bars and canvas with chairs and ceramics, replicating the multivalent nature of the material universe. Exhibited together, these works question the importance of defining objects by their function and environment, pointing instead towards a more universal sense of memory, weight and scale.

At the center of I Do Choose is the notion of choice: namely the artist’s ability to transgress the borders of accepted systems of creation and engagement that dictate our interaction with our material surroundings. This defiant method, based upon a willingly unmediated engagement between artist, artwork and viewer, ultimately serves to refigure an intimate engagement with materiality and form.
-
Jessica Jackson Hutchins was born in Chicago in 1971. She received her MFA from The School of the Art Institute of Chicago in 1999. Since her first exhibition in New York in 2004, Hutchins has exhibited throughout the US and abroad, at institutions such as the Whitney Museum of American Art, New York (2010); Institute for Contemporary Art, Boston (2011); the Eli and Edythe Broad Art Museum, East Lansing, MI (2013); the Hepworth Wakefield Museum, UK (2013); and The Aldrich Contemporary Art Museum, Ridgefield, CT (2014). In 2013, a monograph of the artist, Jessica Jackson Hutchins: Everything Erblaut, was published on the occasion of her exhibition at the Hepworth Wakefield Museum, UK. The artist lives and works in Portland, OR.
www.marianneboeskygallery.com