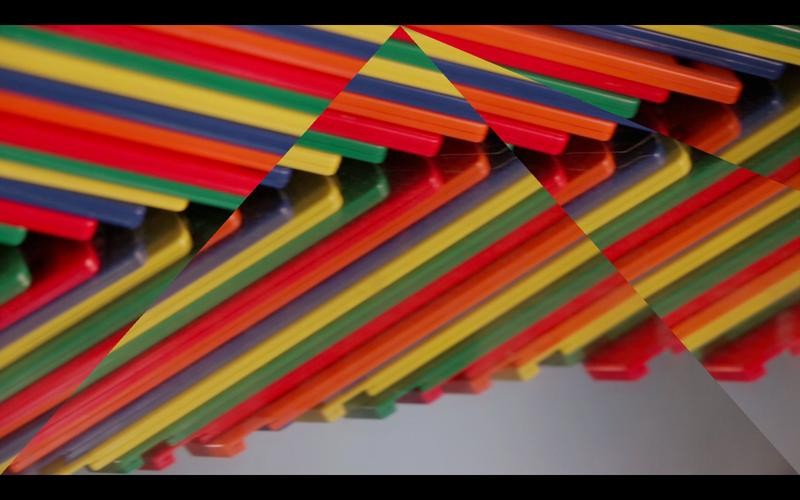 BOESKY EAST is pleased to present Third Person, a two-person exhibition by Jibade-Khalil Huffman and Anthony Pearson. Third Person will be on view from January 11 – February 8, 2015 at 20 Clinton Street, New York.

The exhibition Third Person complicates questions of authorship, the frame, and the notion of the discrete artwork. The premise of the exhibition is based on the idea of projections and screens as both physical and psychological spaces. Here, Huffman will project his colorful and dynamic videos onto blank versions of Pearson’s etched plasters. These blank surfaces, smooth and unmarked, take on a new role as screens, problematizing the very idea of what constitutes authorship and the art object. These “screens” are identical in design, fabrication, and framing as the series that Pearson began in 2012, yet they have no etching. They are simply sanded to a high finish and left untreated.

Pearson's sculptures and photographs tend to be reductive, colorless, monochromic, and process driven. By way of highly specific and exacting methods, he creates forms that are activated by their surrounding environment and illuminating light. The etched plasters in particular rely on the textural subtleties inherent to their surfaces. Huffman works across genres, and whether in photography, performance, or video, he draws on his background in poetry to suggest fractured narratives. Bright colors and dynamic moving imagery create bold shifts and breaks within the work. In Third Person, these two seemingly antithetical practices collide to produce an environment that challenges the conceptual differences between screen, surface, and image.

The installation incorporates a gray scale façade on the windows of the gallery to produce an effect of progressive gradient light and chiaroscuro. Using opaque, semi-opaque, and clear sheets of vinyl, the window treatment generates an environment that allows Huffman’s projections to be shown in darkness on the North wall, while a group of Pearson’s new etched plasters hang on their own and are shown in natural, raking light on the South wall. By simultaneously using projections, natural light, etched surfaces and blank surfaces as screens, Huffman and Pearson obscure the status of the image and its relationship to authorship, and the art object itself.

Jibade-Khalil Huffman (b.1981) was born in Detroit and lives in Los Angeles. He is the author of three books of poems, 19 Names For Our Band (Fence, 2008), James Brown is Dead (Future Plan and Program, 2011), and Sleeper Hold (Fence, 2015). His art and writing projects, spanning photography, video, performance and poetry, have been exhibited and performed at the Hammer Museum, Los Angeles; MoMA/P.S.1, Long Island City, New York; and the Museum of Contemporary Art, Los Angeles, among others.

Jibade-Khalil Huffman will read from his new book, Sleeper Hold, on January 29th at 7pm at the gallery.
www.marianneboeskygallery.com