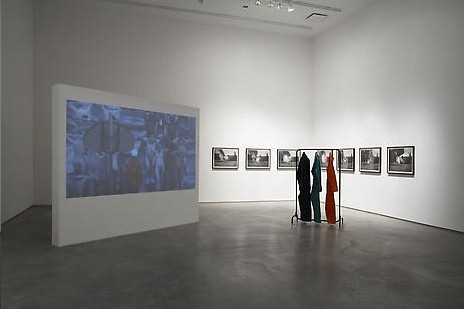 Kon Trubkovich makes videos and uses them as a means of departure, selecting from his own imagery as the basis for his painting, works on paper, photography, and sculpture. And while the video works act as a source to be mined, they also stand alone as their own finite statements. For this exhibition the artist adds another element, incorporating found images and footage into his own crafted vocabulary, as he references a range of sources from the Attica Prison Riots and the Stanford Prison Experiment to the Russian island of Sakhalin and current Internet fodder. Trubkovich, raised in Moscow until the age of 11, explores themes of confinement, rebellion, autonomy and purported freedom, in a self-referential parallel to the concerns of an artist beholden to his own processes.

The video work, No Exit depicts a moment of a riot aftermath as naked prisoners are marched about in endless circles, their footsteps the only other sound accompanying the ambient noise. Used as a means to subdue the inmates, the procession is viewed from two vantage points, forcing the viewer into dual roles. Though the viewer begins at a distance from the prisoners, he/she is forced to oscillate between walking alongside of them in their march to nowhere and pulling back to observe. Trubkovich inverts the color he typically uses to connote captives or fugitives, this time the guards wearing the orange. The video Ant Farm gives the viewer a similar sense of overseeing an interminable inmate activity. As the prisoners are put to a task, no discernable merit or fulfillment accompanies the labor itself, with Ant Farm serving as a modern day Myth of Sisyphus where one is condemned to repeat forever, the same meaningless efforts. The futile exercise questions any intentions of the work as a means to motivate and redeem.

A Thriller is a Thriller is a Thriller functions as a triptych with an appropriated video grouped together with an Attica-inspired collage and a photograph still from No Exit, combining the various pieces in a send-up to Kosuth's One and Three Chairs. Trubkovich imbues the comedic and absurd into the Disneyfied terror and violence of Michael Jackson's Thriller and mirrors it with historical brutality of fact and fiction.

By pausing video, Trubkovich replicates isolated fragments in his drawings and paintings. The analog pause functions as a way to distort and simultaneously free the image from its original context. The pictures take on a new meaning as the grainy pauses feel like culled memories, creating their own unintended narratives from the originally banal videos. The works are then meticulously recreated, rendering line by line the interference and analog distortions of the suspended images. The laborious and time consuming nature of the process is not lost on the premise of the exhibition. The studio becomes a prison where constant cycles of rebellion and containment occur.

Trubkovich explores the idea of achieving freedom within the restraints of incarceration, the desire to escape, and the nature of that achieved freedom. His explosion drawings and Untitled (Ruin) sculpture, like Ilya Kabokov's The Man Who Flew into Space, reflect the inability of a space to confine an energy any longer within its walls, resulting in a physical and spiritual eruption.

Kon Trubkovich lives and works in New York. He was included in the exhibitions "Six Feet Under" at the Kunstmuseum, Bern and "Uncertain States of America – American Video Art in the 3rd Millennium," curated by Daniel Birnbaum, Gunnar B. Kvaran, Hans Ulrich Obrist, at the 2nd Moscow Biennale of Contemporary Art, 2007. The artist had his debut solo show at P.S.1 in "No Country for Old Men," curated by Neville Wakefield in 2006.
www.marianneboeskygallery.com