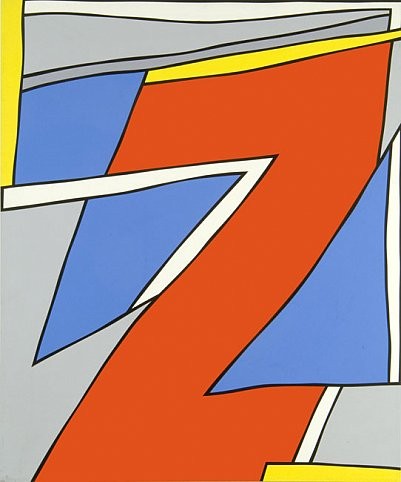 Nicholas Krushenick first exhibited his bold, graphic paintings in the early 1960's, a time when American art was transitioning from Abstract Expressionism to Pop. Krushenick uniquely bridges this divide, applying a pop sensibility to abstract painting. While maintaining the physical energy of AbEx he developed a language of stripes, zigzags, trusses, diamonds, pinwheels and careening plastic structures, and presented them in saturated colors often outlined in black. Systematically produced, his paintings helped define a movement away from gestural expressionism and actively engaged the sensibility of popular culture. Neither pop art nor hard-edged geometry, his work straddles the ground between styles. Noteworthy is that Lichtenstein's brushstroke paintings followed Krushenick's first pop parodies of abstract painting. It is precisely this refusal to be subsumed by the conventions of any given style that makes Krushenick's art so elusive and interesting today.

It may be hard to fully appreciate the scope of Krushenick's originality, as the qualities that he pioneered are ubiquitous in today's visual culture and art practice. Krushenick's ability to transform dynamic forces into a disembodied language of cartoon-like forms sets him apart as a visionary. Peter Halley, writing in Artforum upon Krushenick's death in 1999, gave his work long deserved credit for presaging "both Japanese animation and the 'posthuman' abstraction being pursued by younger artists today." Forty years removed, his preoccupation with caricature and design is echoed in much recent painting: from David Reed and John Wesley to Gary Hume, Jonathan Lasker, Takashi Murakami, Sarah Morris, and many others.

At first glance, Krushenick's dynamic treatment of strong colors and black outlines might give the impression of dry formalism, but this quickly gives way to a wealth of references and contradictions that are playful, sly, often sinister but invariably delivered with a sense of humor. In an era preoccupied with formal concerns, Krushenick's mischievous paintings stood in refreshing contrast to the gravity of artists like Frank Stella or Ellsworth Kelly.

The earliest painting in this exhibition, Electric Soup, 1969, depicts a robust field of red pierced on either side by jagged yellow forms and calls to mind a jumbo flash of television static. In typical Krushenick form, the 8-foot tall painting is both solidly composed and overwhelmingly energized. Jaunty angles hint at something underneath the surface that questions its formality. This painting marks a departure away from the artist's more expressionist style of the early 1960's and the work for which he's most known, towards a style that reflects an increasing conceptual awareness. Focusing primarily on paintings from the 1970's and 1990's, the current show brackets Krushenick's lengthy "late" career.

A 5-foot tall untitled painting from 1976 features a red torqued diamond pinned down by a rigid framework of yellow bars and pale blue triangles. Despite the strength of its design this work feels more spacious, a reflection of the lighter touch of a maturing painter. In Mango Madness, 1993, an overlapping array of black and white gridded shards might read as mountains against a lemon yellow sky. Krushenick's investigation of spatial ambiguity through the juxtaposed patterns began to give way to a more developed sense of literalism, referring explicitly to landscape and the physical reality implicit in the picture's illusory space.

Krushenick's work has been widely exhibited and collected since it was first shown in the early 1960's. Several prominent galleries represented his work until the artist largely withdrew from the artworld in the mid-1970's. Artists and a few likeminded people took note but by this time Krushenick was already flying well below the artworld radar. This exhibition marks an awaited return.
www.marianneboeskygallery.com