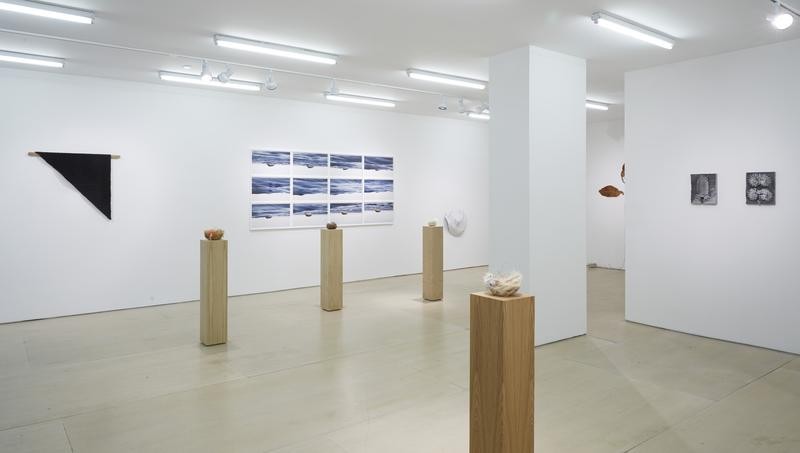 Ordering Nature will present works that explore the relationship between human beings and the natural world. Each artist begins with organic material, which is then transformed by a pre-determined restraint or formal structure. Often, the works are presented in grids, rows, or pairs to highlight slight differences.

Bjorn Braun’s work is produced by recycling materials so that nothing is wasted, only re-purposed and transformed. Braun has raised a pair of zebra finches that he relies on to make his sculptures – he provides them with colorful, found materials such as silver tinsel, brightly colored cord, and aluminum foil, which they incorporate into nests that become sculptures.

The cyclical nature of Braun’s work is echoed in Kate Newby's glass rock sculptures. Newby is interested in subtle interventions that often return natural materials to their origins. Her glass rocks are a prime example of this as sand is both produced by the erosion of rocks, and is also the substance used to create glass. These works speak to ideas of geological time, much like the work of Thiago Rocha Pitta. In Ocean/Atlas Polyptych (2), Rocha Pitta presents a grid of twelve film stills of a capsized boat afloat in the ocean as a way to chart the passing of time. Presented in a serial fashion and turned upside down, the photographs of the ocean become near abstractions - studies in color and form, differentiated only by the cresting waves.

Helen Mirra’s work, Waulked Triangle, is comprised of wool from two different black sheep that has been woven on a triangle loom to highlight the slight difference between the two. A single strand in the center of the work is dyed with pigment derived from a mushroom. Ryan Mrozowski similarly draws upon natural materials to serve as a framework to explore ideas of repetition and difference. He will present a new floral diptych based on stereoscopic vision. The repeating petals serve as a formal structure that allow the eye to drift back and forth, underlining the way in which a painting is read.

Spiros Hadjidjanos also uses fauna as a formal structure with which to explore new technologies. His 3D Alumide prints are generated from Blossfeldt photographs of plants taken in the 1920s. He scans the photographs and ascribes depth based on the black and white shading, which is then rendered in aluminum-nylon composite and results in a kind of 3D bar graph of data.

Pier Paolo Calzolari likewise fuses the technological with the organic in Untitled (Occhio di Dio). As in all of his work, natural elements, in this case tobacco leaves, serve as the framework for ephemeral states and man-made technologies to combine. Framed by the leaves, a candle slowly burns in front of the glow of a small, blue neon light. In the 1890s August Strindberg also attempted to capture ephemeral states of light by laying out photographic plates on his windowsill at night in an effort to document starlight. Despite their celestial appearance, the Celestrographs only captured a chemical reaction of dust and debris that had accumulated on the plates.

Dmitri Hertz’s sculptures possess a similar sense of facsimile. His wall-mounted sculptures begin as epoxy resin casts of rocks into which organic materials such as grass and strawberries are gently pressed. The resulting shells suggest synthetic fossils and hang on the wall to expose the artifice of their hollow forms.
www.marianneboeskygallery.com