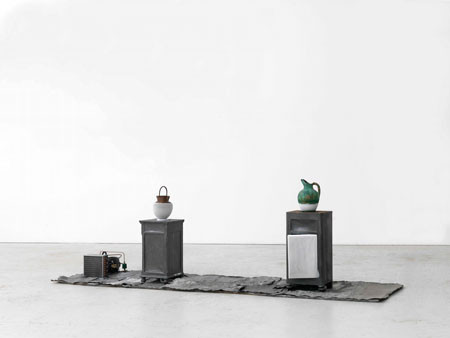 Marianne Boesky Gallery is pleased to announce the opening of BOESKY EAST, a new 1,100 square foot exhibition space at 20 Clinton Street in New York's Lower East Side. As a pendant to Marianne Boesky Gallery's East 64th Street townhouse, which opened in 2010 as a venue dedicated to providing deeper historic context for the Chelsea-based Gallery's artists, BOESKY EAST will bring the Gallery's program and curatorial vision to the more experimental climate of the Lower East Side.

Beginning on May 4, BOESKY EAST will present Comodini, a large-scale sculptural installation by Pier Paolo Calzolari, known for his elemental materials and capturing of ephemera. "Comodini" translated as "bedside tables" combines the components of still life subtly marked with the passage of time and transition of matter as a coating of frost builds on the objects' surfaces and melts through the course of each day. The work will be visible through BOESKY EAST's storefront windows through July 4.
www.marianneboeskygallery.com