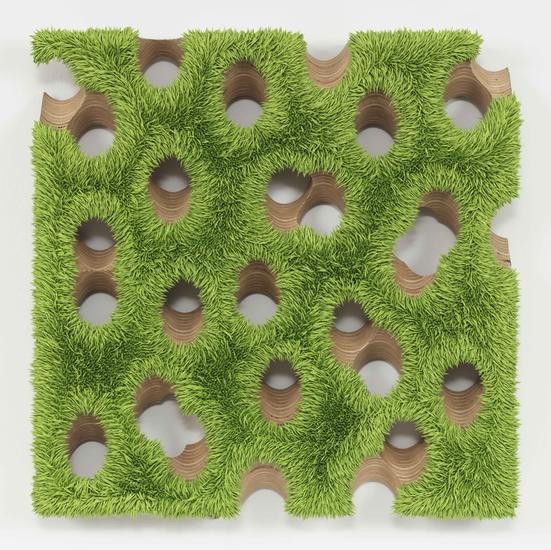 One specific meaning of floss is the silk fiber of a silk worm’s cocoon, and another more general, is any fluffy fibrous material. The selected works of this installation are neither soft nor silky, though they might appear as such. Rather they are an illusion: a distortion of material and form, a visual play on words, a mons veneris or angiosperm of paint, a bristle worm.

During his short life and career, Pino Pascali participated in the major Arte Povera exhibitions. He produced a small, but impactful body of work before dying in a motorcycle accident at age 32 in 1968, the same year he made the bachi. His philosophy was one of applying every day materials, as seen in the Bridge, constructed of steel wool and wire in the collection of MoMA, and of the artist as player. Play was an important part of his work in the sense that the artist has a freedom to experiment, change their work, and extend the games of childhood, as distinct from childish games. For Pascali “everything is a game”, part of “a learning system”.(1) It is a way to understand and critique and comment on your environment. Pascali came of age in Post-War Italy and developed a fascination with an American approach—Pop Art and the technological advances he saw lagging in his own Italian civilization. This playfulness is illustrated in the Bachi da Setola suggesting silk (seta) worms (bachi), but in fact are industrial acrylic bristles (setola) that appear as impish creatures populating the gallery or garden. In the artist’s own words he “pretends” to make sculptures.(2)

Donald Moffett, like Pascali, has a shared impulse of experimentation and changing styles to suit his content. While less about playing, Moffett does not shy away from being a satirist or provocateur. The current installation focuses on the artist’s shag paintings, which may appear to be turf or grass, but are made of oil paint methodically extruded onto the surface. Aside from their formal composition of a wood panel support, sized and gessoed linen, and oil paint, they also conjure the lushness of plant sex and human anatomy: prim on the surface with a musky underbelly. An important distinction between Pascali and Moffett is process and the concept of pretending. Moffett makes paintings, though the paintings themselves may “pretend” to be more like sculptures. “Paintings are generally two-dimensional with perhaps the illusion of space held on their two-dimensional surface. My paintings are three-dimensional, and the expression of those dimensions is real from the outermost point of the extruded paint to the back of the panel exposed by the drilling. This is usually about a three-inch depth—a lot for a painting (maybe), but not much in the scheme of things, in the world.”(3)

Floss is a merging of representations of nature. Each fiber, each tendril, each thread is grounded in biology from cilia to stamens, figuratively wriggling and waving, animating the gallery space. Nature is not replicated, but mimicked. As simply stated by Pascali, “No one rips off nature.”(4)