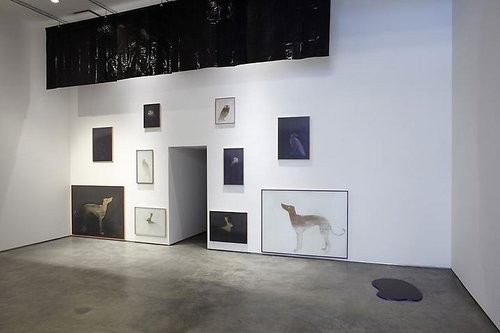 Marianne Boesky Gallery is pleased to present Robert Elfgen's first solo exhibition in New York City. The exhibition will run from the 9th of May through the 6th of June.
Working with a wide range of materials, Elfgen's practice encompasses painting, sculpture and installation. While his veneer works of forest animals are beautifully crafted, the hands-on aesthetic of Elfgen's sculpture and installations is indicative of the artist's artisinal approach to art. Elfgen explores his subject matter, nature and particularly the symbolism of animals, from a highly romantic point of view, which can be located in the tradition of German idealism, but which is also indicative of the artist's personal history. Growing up in rural Germany, Elfgen refers to the rituals of childhood and the anthropomorphic powers of his pets in order to open up a vocabulary of symbolic images which is at once personal and universal. Appropriating the surrealist method of displacement, the artist seeks to re-create nature's symbolic order in the gallery space.
Elfgen's installations are arranged as metaphorical systems, in which objects and animals are carefully positioned in relation to each other and to the viewer. Entering the gallery space, a fox seems to either greet the viewer or to be darting from the space. A theatre-like space dominates the first gallery. A mirror-arrangement of animals, dogs, rabbits, and owls, flanks a small door leading to another gallery. In black and white, they seem to portend life and death, the literal and the spiritual. Remnants of human intervention sit in the corner, lonely and apart.
The tunnel from the first gallery to the main gallery acts as a passage from the real to the spiritual. A large circular curtain fills the darkened room. On it are projected three dancers which slowly rotate along the curtain, their fluid motion resembling spirits in the forest. Off to the side, deep in the gallery, a painting of a sleeping figure rests along side of an orb-like light. Perhaps he is dreaming of the dancers. Exiting the space and re-entering the first gallery the viewer faces a painting of criss-crossing lines, a metaphor of nature's complex systems.
Robert Elfgen's work is currently on view at Monika Spruth Philomene Magers in Berlin. He has been presented in solo exhibitions at Spruth Magers, Cologne and London, 2008; the Kunstverien Bonn, 2005; the Sumultanhalle Cologne, 2003, and the Kulturzentrum Antwerp, 1999. He studied under Rosemarie Trockel at the Kunstakademie Düsseldorf and John Armleder at the Hochschule für Bildende Künste Braunschweig.
www.marianneboeskygallery.com