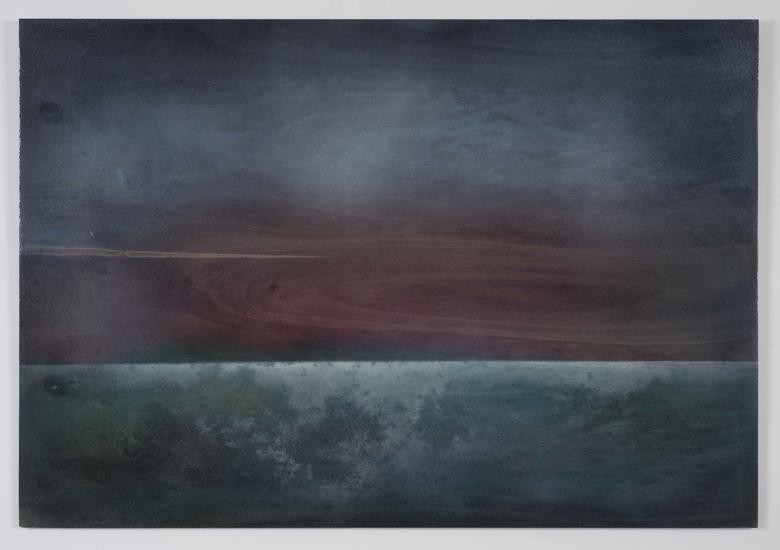 BOESKY EAST is pleased to present there and after all, a solo exhibition by Robert Elfgen. This is the artist’s second solo exhibition with the gallery and will be on view from March 29 – April 26, 2015 at 20 Clinton Street, New York.

Working between painting, collage, sculpture, and installation, Robert Elfgen draws upon the symbolic power of imagery to create unstable allegories that challenge the fixed nature of representation. Much of Elfgen’s practice is driven by the act of collecting: found street signs, broken fence posts, and other castoff remnants populate his installations and assemblages. Paintings of flora and fauna from his home in rural Germany are intuitively placed alongside these objects to create open-ended metaphors that allow for evolving meanings. It is this intersection of art, society, and nature that is at the forefront of his work.

In there and after all, Elfgen will present a new series of landscape paintings that seem to dissolve into pure abstraction. Ethereal shades of blue, pink, and purple blend together and are delineated only by a thin horizon line or the occasional passing cloud. The paintings reveal highly treated surfaces that combine water stains, sawdust, and epoxy resin. Thin washes allow the grain of the plywood to show through, suggesting clouds stretching across the sky, tree lines, ocean waves, or a sunset. Actual leaves are carefully pressed onto the surface of the paintings, which are then mirrored by their own spectral imprints.

A towering street lamp presides over the exhibition, jutting out of the wall and nearly reaching the ceiling. This act of displacement encourages free associations between interior and exterior, society and nature. Elfgen further pursues this idea with large assemblages in which a diverse medley of found objects are arranged in an improvisational way amidst a series of the landscape paintings. Stacked like a deck of cards, the paintings’ relationship with each other and the assemblage at large feels fluid, as if they could be re-shuffled and re-imagined in any number of ways. Elfgen's highly personal vocabulary allows his paintings to slip between abstraction and landscape, his assemblages to disperse into a constellation of signs.
-
Robert Elfgen (b.1972) lives and works in the town of Bornheim, near Cologne. He studied with John Armleder at the Hochschule für Bildende Künste Braunschweig and was awarded “Meisterschüler” (master scholar) of Rosemarie Trockel at the Kunstakademie Düsseldorf. In April 2015 he will present a solo museum show at Oldenburger Kunstverein and will be a resident at CCA Andratx in Mallorca. Elfgen was the recipient of the Peill Grant from the Leopold Hoesch Museum in Düren and will have a solo exhibition there in 2016. Recent solo shows include Sprüth Magers, Berlin and Cologne; westlondonprojects, London; and Bonner Kunstverein. Recent group exhibitions include the Kunstmuseum Wolfsburg and the Lentos Kunstmuseum, Linz; the Museum Morsbroich, Leverkusen; the Städtische Galerie Karlsruhe; ZKM Karlsruhe; and the Kunstverein Kassel. A monograph with texts by Lillian Haberer and Ruth Kissling was published by DISTANZ Verlag in 2013.
www.marianneboeskygallery.com