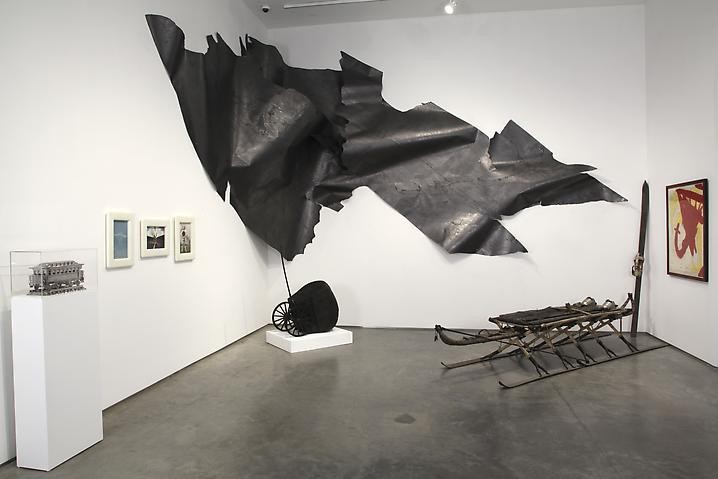 Marianne Boesky Gallery is pleased to present its first exhibition of the work of Salvatore Scarpitta since commencing representation of the estate in 2010. Trajectory tracks Scarpitta’s career within the context of his artist circle, from Post-War Rome to NY and the Castelli Gallery to his 30 year influence as a professor at Maryland Institute College of Art. The exhibition presents 28 works by Scarpitta from 1958 to 2000, encompassing his journey through wrap paintings, race cars and sleds, in the company of works by his peers and students from Manzoni, Kline and Rauschenberg to Koons, Rubins and Puryear.

Italian-American artist Salvatore Scarpitta was born in New York City in 1919 and spent his childhood in Hollywood, CA where he fostered a love of dirt track racing. He moved to Italy in 1936 to study painting, enrolling at the American Academy in Rome, and remained in Europe through much of World War II. In the 1950’s, in an effort to purge the trauma of The War, Scarpitta began his revolutionary structured and bandaged paintings. From 1957-1958 both he and Cy Twombly had studios on Via Margutta and it was there that he created his first shaped canvas. Counted among Scarpitta’s compatriots were Alberto Burri, Piero Dorazio, Lucio Fontana and Piero Manzoni, among others. In 1959 the renowned Roman Galleria La Tartaruga mounted the prescient exhibition of twentieth century titans: Franz Kline, Mark Rothko, Salvatore Scarpitta and Cy Twombly. That same year, Leo Castelli offered Scarpitta a solo exhibition, instigating Scarpitta’s move to New York and beginning a 40 year relationship with the legendary dealer.

Returning to New York, Scarpitta was at the center of the avant-garde art scene striking up friendships with Norman Bluhm, Willem de Kooning, Philip Guston, Frederick Kiesler, David Smith, and many of the Castelli Gallery artists. He also reconnected with Conrad Marca-Relli and Angelo Savelli, both of whom he had known in Rome. Despite associations with both Abstract Expressionists and Pop artists, Scarpitta’s work remained on the fringes of most defined movements of the period. His brand of Americana, as expressed through the race car, combined with an Arte Povera sensibility resulted in work that was emotive, yet hopeful. For Scarpitta the personal narrative was inseparable from the work. Most evident in 1964 with his replica of “Rajo Jack,” a race car he had seen as a boy on the Legion Ascot Speedway in California.

The race cars were literal expressions of what he felt was embodied within all of his work: life, death, rebirth...movement. While his early cars did not run, he was laying the groundwork for performance art while concurrently melding the Readymade and Futurism. In 1985, with Leo Castelli’s sponsorship, Scarpitta began to build functioning race cars, and assembled his own competitive team - bringing his artwork from the studio, to the track, and finally to the gallery.

The 1970’s marked the next great development in his work: the sled. It was the car in a distilled form – the chassis without the wheels, an object for dragging your memories and feelings while simultaneously connoting a sense of adventure. Scarpitta’s “Sled Log,” his first, was acquired by de Kooning in 1973.
From 1965 to 2001 Scarpitta taught at Maryland Institute College of Art. Beyond school walls his influence is still experienced today through a generation of younger artists like Jeff Koons, Matthew Barney, Martin Puryear, Nancy Rubins, Julian Schnabel and Not Vital.