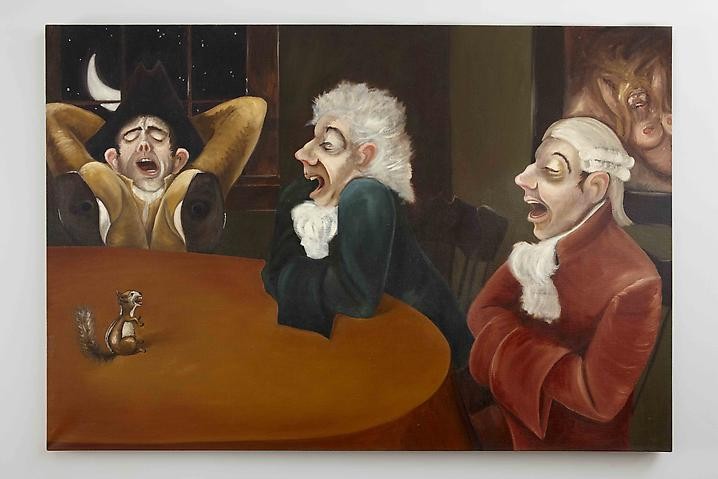 Marianne Boesky Gallery is pleased to present, A Midnight Modern Conversation, an exhibition of work by Sean Landers that takes William Hogarth’s eighteenth-century painting of the same title as its point of departure. Conceived of and originally presented in 1996 at Regen Projects, Los Angeles, the thirteen paintings and seven works on paper that comprise the series are gathered again at the gallery's uptown space for the first time since their debut 15 years ago.

In “Manly Satire’s Varied Graces,” an essay on these works, the critic Caoimhín Mac Giolla Léith explains the relationship of this series to previous pieces, and describes its continued importance to Landers’ practice:

If fond of knowledge
Seek it in town, and quit the ruddy college
Here, the soft sex, here, the enlivening bottle
Will teach you more than can old Aristotle.
-Anon., ‘The Rake of Taste,’ c. 1735

In 1996 Sean Landers was ten years out of college, Yale University School of Art to be precise, where he had completed his MFA. On a return visit to his alma mater he became fascinated by a painting that hung in the Yale Center for British Art, William Hogarth’s A Midnight Modern Conversation, ca. 1732. This is a rambunctious indoor scene in which a late-night gathering of eighteenth-century London worthies—lawyers, merchants, clergymen and physicians—has degenerated into a rowdy debauch fueled by copious amounts of alcohol. In other words, a classic Hogarthian scenario of debilitating indulgence and excess. Meanwhile, back in town—late twentieth-century Manhattan in this case—Landers was also engaged, by his own account, in the nightly pursuit of the “enlivening bottle,” not to mention the “soft sex.” He was enjoying the fruits of early success and a degree of welcome notoriety as registered by a string of one-person shows throughout the early ‘90s in galleries in New York, Chicago, London, Paris, Cologne, Berlin and Zurich. Invited to mount a solo exhibition at Regen Projects in Los Angeles, he embarked on a series of works inspired by Hogarth’s painting

Landers’ work [prior to the Hogarth series] had included a freewheeling, semi-autobiographical screenplay, jotted down on reams of yellow legal pad, featuring the artist’s hapless alter ego, Chris Hamson; a selection of freestanding sculptures covered with plastic bags, as if abashed by their own ineptitude; a collection of cartoons lampooning the self-regarding fractiousness of the downtown art world; a video of a chimpanzee let loose in the artist’s studio; a troupe of grotesque leprechauns in green-glazed terracotta; a steady stream of billboard-sized canvases covered in handwritten narratives of tortured or ecstatic self-revelation; a no-holds-barred, published memoir in a similar vein; and a series of videos featuring the artist’s solo performance of various actions ranging from madcap dancing through artful onanism to painful self-flagellation...The threads that drew this disparate body of work together were the logorrheic confessionalism of the artist’s voice and the exhibitionistic display of the artist’s body, which is to say the manically orchestrated performance of a more-or-less consistent persona.

[Though the Hogarth paintings differed formally from his previous pieces], they did not abandon the autobiographic underpinnings of the earlier work...He describes these paintings as constituting “an incredibly juvenile rendition of the story of growing up”, of “outgrowing the drinking based camaraderie/culture on which my friends and I had subsisted for so long... [where] we kept each other company as we waited to be ‘discovered’ and, ultimately, of finding my future wife and deciding to get married.” As he puts it, “I was telling a story from my life through painting and using art history to do it.”

Occupying a notable position in the self-consciously wayward development of Landers’ oeuvre these works came at a moment when Landers had decided for the first time, though not the last, to abandon the textual outpourings that had become his trademark. Years later he recalled the dismay with which they were received in some quarters, though the available contemporary reviews read favorably in retrospect. He also, however, remembers a distinct sense of liberation on completing these works and credits them with opening up a range of possibilities for ... narrative painting, in the broadest sense, which he continues to explore today. - Caoimhín Mac Giolla Léith, March, 2011