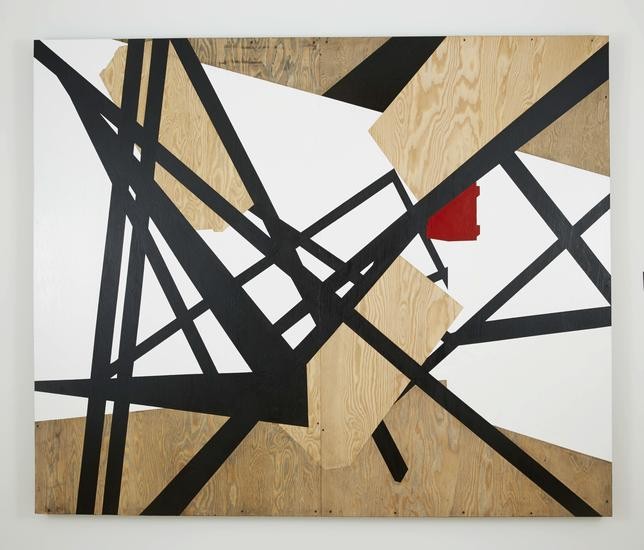 BOESKY EAST is pleased to present Morphings in BLACK, an exhibition of new work by Serge Alain Nitegeka. This is the artist’s first exhibition at the gallery since joining in 2013. Morphings in BLACK will be on view from November 14 – December 21, 2014 at 20 Clinton Street, New York.

Serge Alain Nitegeka repurposes modernist preoccupations with line and the picture plane, utilizing these formal concepts as a foundation from which to address larger social issues such as the forced migration of peoples and the political and cultural borders that define us.

For this exhibition, Nitegeka presents new paintings that refer directly to the series of sculptural site-specific installations that he has created since 2008. These installations – large-scale and ephemeral – bisect space and choreograph the viewer’s movement, proposing the physical and conceptual conditions that the artist, as a refugee, has himself encountered. Rather than illustrating these events, the resultant paintings are documents of them. Sourced from photographs taken by the artist, the paintings are aestheticized memories of past events, re-addressed and re-worked into a new and wholly autonomous form.

Just as the artist’s installations present spatial inquiries, so the paintings propose similar exploration. The combination of painted surfaces, visible unprimed plywood support, and geometric forms presents an oscillation between flatness and suggested perspective; here, the works enter into the modernist conversation surrounding the interruption of the painted surface. This uncanny sense of space is particularly apparent in the large-scale paintings, which loom and invite, only to thwart the viewer’s point of entry. This visual tension embodies these works’ hybrid nature as abstract compositions that also relate directly to the outside world and lived experience.

A self-portrait of the artist, exemplifying his talents as draughtsman, offers an unexpected pendant to these “abstract” works. Here, the artist again returns to photographic sources, mining pictures of himself as well as his relatives. For the artist, this act of drawing presents a search for his roots as much as an aesthetic endeavor. Just as the paintings refer to and investigate past events, so the portrait proposes a similar exploratory revelation.

Serge Alain Nitegeka was born in Burundi in 1983. He received his BA from the University of Witwatersrand, Johannesburg. Since his first exhibitions in 2008 – a solo show at The Mezzanine, University of Witwatersrand, and a group show at the Goethe-Institut, both in Johannesburg – Nitegeka has participated in museum and gallery shows throughout South Africa, as well as in Senegal, Australia, and Europe (Paris and Berlin). Nitegeka’s site-specific installation in the gallery’s booth at The Armory Show 2014 marked the artist’s first presentation in the United States. In February 2015, Nitegeka will be the subject of a solo exhibition at Savannah College of Art and Design and will participate in a group show at the Harvey B. Gantt Center, Charlotte, NC. Nitegeka currently lives and works in Johannesburg.
www.marianneboeskygallery.com