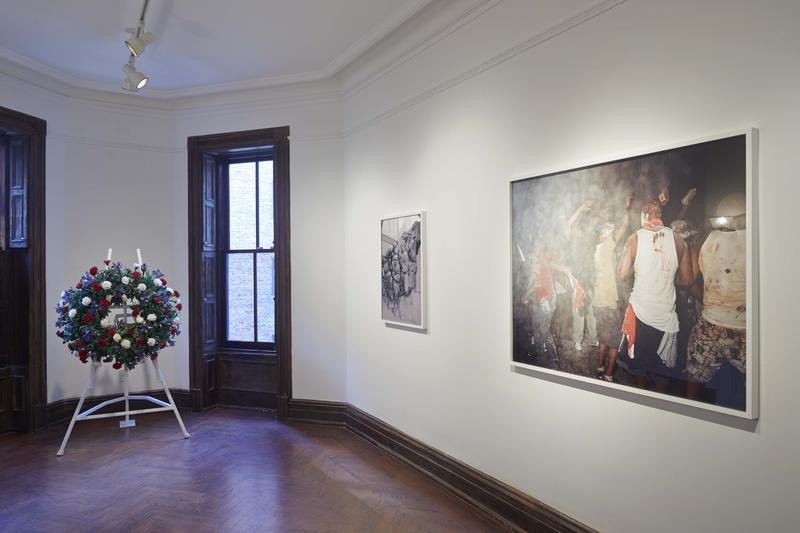 Marianne Boesky Gallery is pleased to present Something Beautiful, a group show curated by Nicolas Wagner and Khary Simon of CRUSHfanzine. This exhibition uses the lens of contemporary photographic portraiture to examine the ideals of youth as a product of memory and the wisdom of hindsight. Like a daydream, the works on view propose the fleeting sensuality of a fantasy, coupled with the sense of loss that comes from a jolt back to reality—a juxtaposition analogous to the journey from childhood to adulthood. Artists Jeff Burton, Sue de Beer, Keith Edmier, Roe Ethridge, Annika Larsson, Deana Lawson, Viviane Sassen, Paul Mpagi Sepuya, Xaviera Simmons, Dorothée Smith, Eva Stenram, Eric Stephany, and Wu Tsang come together here, offering varied photographic visions that portray different manifestations of this shifting space—between youth and maturity, between the ideal and the true.

Something Beautiful takes the recent still and portrait photography work of Sue de Beer as its point of departure. De Beer's earlier work is recognized for its empathetic portrayals of youth, in which her raw process of casting and on-camera improvisation create a sense of the unfolding of real experience located in an artificial world of sets and props. In her latest work, de Beer cuts notions of reality adrift, giving her subjects idealized versions of themselves: an entire film encapsulated in one image. The selected artists follow varied routes in their embodiment of this theme, presenting photographic visions of memory, experience, beauty, and voyeurism.

The rawness of exchange between model and camera provides fertile ground for exploration of the in-between. Artists Vivianne Sassen and Dorothée Smith make portraits whose documentary value is superseded by narrative suggestion and sheer loveliness, evoking the uncanny ability of memory to heighten and shape our histories. The fleeting middle ground between youth and maturity or the illusory and the real is further explored in Paul Mpagi Sepuya’s ability to capture his subjects, human or inanimate, in informal, semi-candid moments that consider a transient stage. Roe Ethridge leads us seamlessly through distant landscapes and familiar faces, providing a sense of nostalgia in his intimate portraits. Together, they promote a quality akin to languishing moments before falling into an afternoon dream, only to awake with splintered memories.

Born from a visceral, multi-sensory reaction to dream and memory, we find Eva Stenram’s portraits with isolated body parts and furniture as central within domestic settings. Selected pieces of information are conveyed, leaving the viewer to piece together what has unfolded through a glimpse of a personal environment. Similarly, Deana Lawson imparts her subject’s individual and social backgrounds through personalized settings. Keith Edmier takes it a step further in his sculptural representations referring to personal narrative in his studies of nature, sexuality, and regeneration.

Eric Stephany and Xaviera Simmons follow similar modes in their exploration of the familiar thwarted by the enigmatic. Stephany's shadows reveal, or rather conceal, the object of his affection and the ubiquity of sexual desire. This disorienting fragmentation is expanded upon in the work of Annika Larsson and Wu Tsang. Larsson and Tsang disorient the viewer with conflicting visual or narrative fields present in their work, analogous to the tension that exists between recalled and actual experience.

Taken together, the works in this exhibition convey the atmosphere of the past as it is evoked in the present—a bittersweet sentiment at once physical and cerebral. Here, the qualities of youth are portrayed, but can only exist in an incomplete state. The quiet tension of desire, with its accompanying sense of loss or insatiability enables an exploration of the uncanny, wish-fulfilling nature of images, and the performance between photographer and subject allows us, the ordinary viewer, to participate in the production of something beautiful.