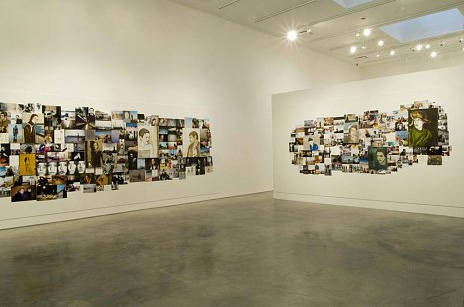 Marianne Boesky Gallery is pleased to announce the first New York solo exhibitions of Leipzig-based artists Stephanie Dost and Franziska Holstein. Recent graduates of the Leipzig Academy of Visual Arts under the tutelage of Arno Rink and Neo Rauch, these contemporaries are unique figures in a new generation of predominantly male German painters.

Stephanie Dost amasses a body of variously sized paintings, drawings, and photographs, both personal and found, into large, patch-worked grids. Though painting plays a role in her work, Dost is more of an installation artist painting with images rather than with paint itself. Consisting almost entirely of self-portraits and portraits of the artist's friends, Dost's grids elude a linear narrative and instead allow for a multifaceted portrait of the artist and her peers in the round. The artist's universe of images, in a multitude of repeated and reworked versions, evokes an advertisement technique of endless plastering yet also remains connected to painterly technique in its composition and assemblage. The different layers of Dost's installations, both technically and in content, combine for an overall effect evoking the vanities of the young.

Franziska Holstein similarly combines a multitude of disparate images into installations. Yet unlike Dost, Holstein employs solely painting on canvas to compose her assemblage works. A snapshot aesthetic pervades the work's content with tightly cropped compositions, as Holstein's images suggest personal, caught moments with an album-like presentation. Holstein's portraits span from generations of fresh-faced children alone or with doting elders, to happy family pets, to everyday household items in all their domestic glory. Even empty interiors hint at a human presence soon to be returning. Similar to Dost's installations where no singular narrative emerges, Holstein's paintings, with a seemingly female viewpoint, produce a collective feeling of nostalgia for the intimate scenes they portray.

Both Stephanie Dost and Franziska Holstein live and work in Leipzig. Dost recently exhibited her first solo show at Galerie Christian Ehrentraut in September 2006. Holstein held her latest exhibition at Galerie Echolot, also in Berlin, and she continues with her PhD studies under Neo Rauch.

Marianne Boesky Gallery is located at 509 West 24th Street, between 10th and 11th Avenues. Our hours are Tuesday to Saturday from 10am to 6pm. For further information or images, please contact Annie Rana at 212-680-9889 or annie@marianneboeskygallery.com.