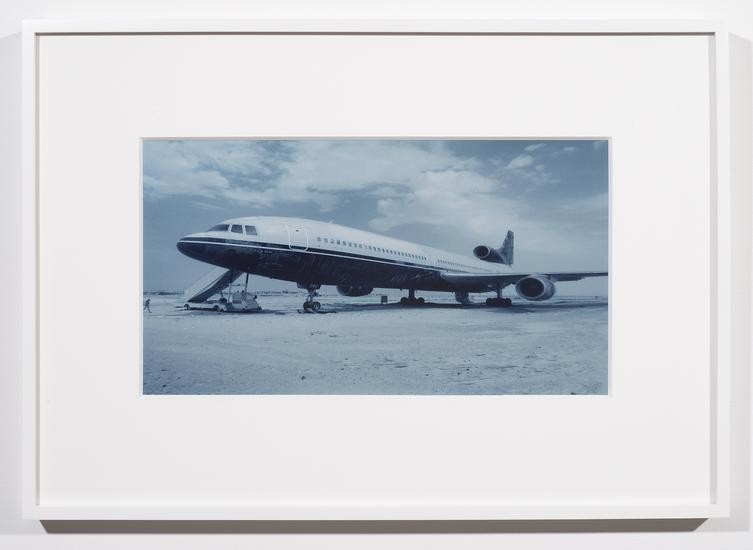 BOESKY EAST is pleased to present a new video installation by Sue de Beer entitled The Blue Lenses, the artist’s third solo exhibition with the gallery. The exhibition will be on view from September 9 through October 25, 2015, at the gallery’s Lower East Side location at 20 Clinton Street.

Over the past two decades, de Beer has become well known for her work in film as well as for her immersive sculptural environments. As part of this exhibition, de Beer’s new two-channel film The Blue Lenses will make its world premiere, marking the first time the artist has filmed in the Middle East. The Blue Lenses loosely resembles a film noir that is set in Abu Dhabi and follows a small-time con artist and a young Arabic woman’s observations of him.

The title of the exhibition and film is drawn from Daphne du Maurier’s short story of the same name. Du Maurier’s The Blue Lenses tells the tale of a woman given surgery to restore her vision: upon the bandages being removed from her eyes, she sees people entirely differently, that is, with predatory animal heads rather than human heads. As du Maurier’s story questions reality versus fiction and trust versus deception, de Beer’s film also wrestles with these themes.

Consistent with her past presentations, de Beer has created a site-specific environment containing plush seating and carpeting to enhance the viewer experience. Two walls of floor-to-ceiling aluminum screens cut with patterned motifs found in Islamic architecture stand in the room and were used as inspiration for various scenes within the film. The gallery windows facing Clinton Street have been tinted a deep jewel-toned blue as a nod to the film’s title and also to invoke the colors commonly associated with power and beauty in Islam.

In addition to the film will be a presentation of photographic stills and portraits to further illustrate the characters and landscapes at play within the film. Here, as in the film, de Beer treats the Middle East as a “character.” And while the images and landscapes in the photographs and the film exude a light and poeticism unique to the Middle East, the noir storyline recalls a history of images originating in the West. In this way, The Blue Lenses defies the viewer’s expectations of Abu Dhabi by placing it within the context of a noir. And as in du Maurier’s mid-20th century story, truths seem distorted and perceptions multifaceted. Ultimately, the Middle East that de Beer portrays—like the people, characters, and worlds in all of her films—is both real and invented. In de Beer’s words, “It is up to the viewer to simply accept the world as it is presented, or to unravel the fictional from the real.”

The texts for the two main characters in The Blue Lenses were written with Nathaniel Axel during filming and in response to the shoot locations and the performers. The collaborative element in de Beer’s practice at large is indeed a key component in this project—from co-authoring the script, to sourcing voiceovers from the Iranian-Parisian singer Lafawndah, to relying on the input and spontaneous intervention of her actors during filmmaking.

Formally, the cinematography is disorienting, in line with the narrative. Shots go in and out of focus, the lens flickers, the camera is unsteady, and its subjects are cropped at distorting angles. De Beer has become associated with visual experimentation in film, as evidenced by earlier works such as Silver and Gold (2011), The Ghosts (2011), and Room 309 (2012); de Beer’s techniques in The Blue Lenses further explore the formal capacity for this medium to evoke and transport in combination with her installation interventions.
–
Sue de Beer lives and works in New York. She received her BFA in 1995 from Parsons School of Design, New York, and received her MFA in 1998 from Columbia University, New York. Solo presentations of her work have been exhibited internationally, including at Kunst-Werke, Berlin (2003); the Whitney Museum of American Art, New York (2005)—where she was also included in the 2004 Whitney Biennial; the MuHKA Museum, Antwerp (2008); the High Line, New York (2011); and the Park Avenue Armory in association with the Art Production Fund, New York (2011).
www.marianneboeskygallery.com