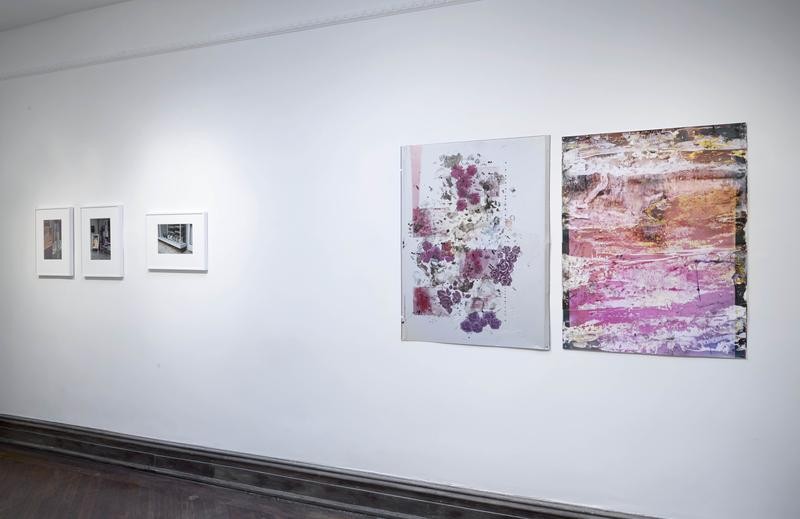 The concepts, construction, and manipulation of images on view relate strongly to photography’s material history, while at the same time extending and altering the medium’s conventional boundaries. As these artists make their photographs, rather than take them, many consider process itself to be as significant as the end result. Indeed, their photographic endeavors combine early 20th century Modernist ideas of the constructed image with perspectives related to 1960s Conceptual art, Process art, and Post-Minimalist art traditions, as evidenced in such disparate work as that of Amy Granat, Barbara Kasten, Ken Okiishi, Arthur Ou, and Anthony Pearson.

For some artists in The Material Image, their works are the results of studio-based, photographic experiments that revel in the aspects of photography’s early, camera-less history that favored chemical experimentation and the exploration of gesture, line, and spatial abstraction. These new, process-based works are created through both familiar methods, such as the photogram, to more obscure 19th century techniques such as cliché verre and hybrid techniques of the artists’ own invention, often involving the spirited misuse of light-sensitive chemicals or the creation of unconventional negatives, as seen in the contrasting works of Nick Mauss, Mariah Robertson, and Matt Saunders, among others.

Processes of the darkroom are also extended out-of-doors, as sunlight, rain, and wind serve as alchemical progenitors, creating shadows and contours on deteriorating surfaces. Taking advantage of the inherent instability of chemicals, dyes, papers, and fabrics, these artists embrace chance and accident as they leave their works outside, allowing the natural elements to complete them, as exemplified in various ways in the work, for instance, of Sam Falls, Ryan Foerster, and Jason Loebs.

For others, properties of the medium are further stretched to investigate sculptural forms. In some instances, sculptures are generated from the photographic material itself, while in others the image becomes more akin to an integrated object, inseparable from the framing device or elements around it. For some, sculptural arrangements are the means to an end and exist only through their documentation as a final photograph. These divergent engagements, intermingling sculpture and photography, are alternately demonstrated in the work of Michele Abeles, Rachel Harrison, Leslie Hewitt, Barbara Kasten, and Chris Wiley, among others, as they play with the perceptual intricacies of physical versus intangible space.

Such conversations about the “real” and the artificial, the actual and the virtual, are continued in the work of such artists as Michele Abeles, Lucas Blalock, John Houck, and Marina Pinsky, through an underlying fluid combination of analog photography intermixed with elements of digital manipulation. Utilizing a combination of the camera, the scanner, and computer software to generate their compositions, these artists create multi-layered images that often reflect, rather than obscure, qualities of technical intervention. In this way, the mediation of the image’s creation becomes part and parcel of the works’ content.

Ultimately, it is the basic experience of light and time that are the underlying photographic conditions for the works in the show, as these artists exploit and transcend the medium’s historical bounds.

Debra Singer is an independent curator and writer living in New York City. Previously, she served for seven years as the Executive Director and Chief Curator of The Kitchen and, prior to that, was a contemporary art curator at the Whitney Museum of American Art, where she co-organized the 2004 and 2002 Whitney Biennials as well as organizing more than a dozen solo exhibitions of new projects by emerging artists and serving as the Museum’s primary performance curator.
www.marianneboeskygallery.com