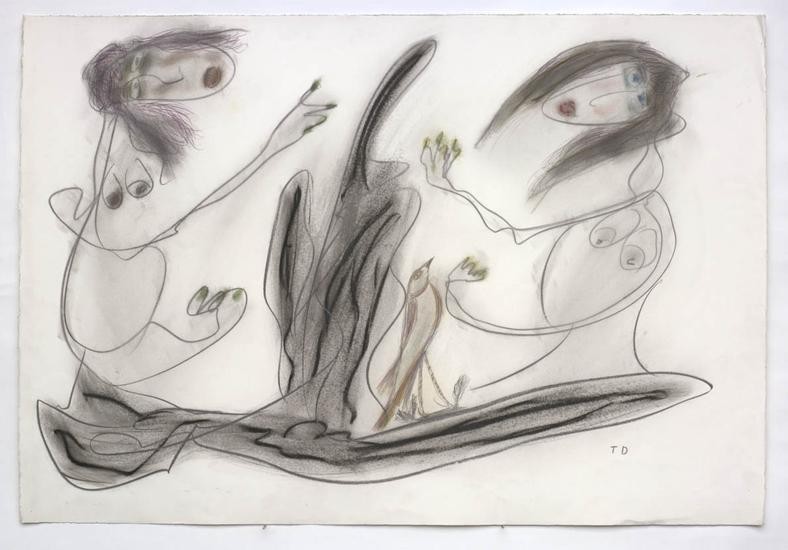 Thornton Dial was born in Sumter County, Alabama in 1928, with the scars of slavery still fresh on the landscape and the ravages of Jim Crow oppression restricting African-Americans’ every movement. Choosing to lean into the hardship of his experiences, Dial’s body of work chronicles his life, using a range of techniques including colorful works on paper to monumental sculptures and densely packed assemblages of found materials. Drawing from his personal, as well as a collective, wellspring of experiences living as an African American man in the South through the middle of the twenty-first century, Dial’s work captures struggle and oppression, but also joy and wit, and challenges viewers to wrestle with their own preconceptions, prejudices, as well as ironies of being an American.

Dial’s works on paper, in this show, date between 1990 and 2008, and provide a colorful entry into the themes and tones Dial carries throughout his larger body of work. Often representational, the works on paper depict, among other things: women, animals, immigrants, African Americans, laborers, and the rural poor. Some of the works portray an environment in flux while others feature a metaphorical literacy made up of a menagerie of mules, tigers, fish, and birds. These symbols, coupled with Dial’s clever titling of his work, reveal an artist’s mind deeply committed to the examination of his place in the world. Information from television mainly addressing issues including natural disasters and reactions to them, the artist’s own infallibility, relationships between men and women, the advancement of technology, the effects of consumer culture on society, and race and political representation, the drawings signal a deep understanding of the human condition. In a similar style to neo-expressionism, Dial’s distinct form and handling of materials mirrors his content – he uses aggressive strokes, swirled lines, twisted and fragmented figures, and choice but strong areas of color.

From somber and violent, to humorous and joyful, these works show sensuous figures in connection with each other and with nature, in peace and at play. The works can be seen as autobiographical, telling the story of Dial’s humble beginnings, the inspiration he found in strong female role models, his subjection to class and racial prejudice, and his enduring determination to seek the truth at the heart of it all. With their exuberant and vibrant lines, Dial’s drawings suggest that through their creation, Dial is simultaneously making the world he wants to see and the man he wants to be in it. The works on paper reveal how the artist chooses to interpret life as it was and is, mining our country’s bleak history to offer up moments of collective struggle, triumph, and optimism.
-
Thornton Dial (b. 1928) currently lives and works in Bessemer, AL. He has had solo exhibitions at the Indianapolis Museum of Art; Museum of Fine Arts, Houston; New Museum of Contemporary Art, New York; Ackland Art Museum, Chapel Hill; Montgomery Museum of Fine Arts; High Museum of Art, Atlanta; and Milwaukee Art Museum. His work is included in the American Folk Art Museum, New York; Birmingham Museum of Art; Brooklyn Museum, Brooklyn; High Museum of Art, Atlanta; The Metropolitan Museum of Art, New York; Milwaukee Art Museum, Milwaukee; The Museum of Fine Arts, Houston; Museum of Modern Art, New York; Philadelphia Museum of Art; Smithsonian American Art Museum, Washington, D.C.; and the Whitney Museum of American Art, New York.
www.marianneboeskygallery.com