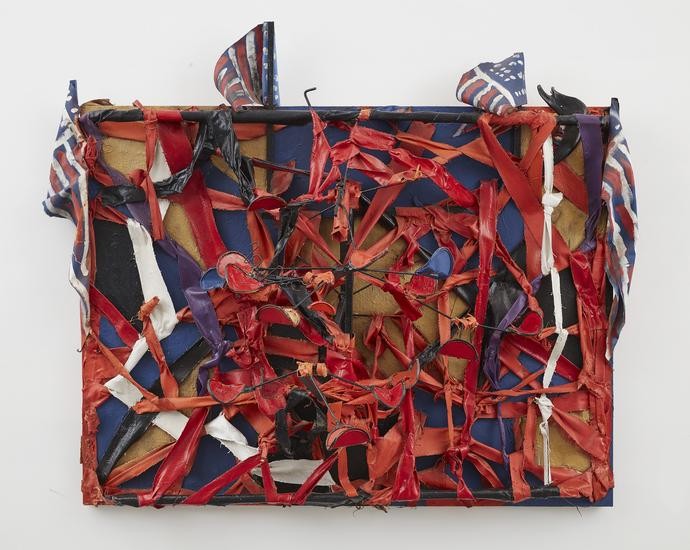 Marianne Boesky Gallery is pleased to present We All Live Under the Same Old Flag, an exhibition of paintings by Thornton Dial. Created across the last two decades, the featured works highlight Dial’s engagement with contemporary social and political issues such as poverty, homelessness, and war. The exhibition is the first in New York since the artist’s passing earlier this year, and follows the recent solo exhibition of his works on paper at the gallery’s former Upper East Side space. It will be on view April 30 – June 18, 2016, at 509 W. 24th Street, New York.

Through his art, Dial revealed the stories of those living in the rural south, highlighting the experiences and tensions among those of different class, race, and economic power over the last seven decades. In the latter part of his career, Dial pushed his perspective and work outward, choosing to connect with and interpret a more universal and contemporary history. We All Under the Same Old Flag explores this conceptual and aesthetic transition, and emphasizes Dial’s ability to capture a broader, national consciousness on the canvas.

A self-taught artist, Dial began constructing sculpture and assemblage with found scrap materials and objects from his job as a metalworker. He transformed old tires, chains, twigs, and rusted-tools, forming the foundation for his artistic practice for years to come. His highly textured wall reliefs, paintings, and gestural works on paper often employed a secret language of symbols that convey strength, survival, and freedom--important to the dialogue of the black experience. Dial also incorporated ideas and techniques from African-American quilt-making traditions, noticeable through the shape and scale of certain work, the incorporation of woven materials and used-clothing, and grid-like compositions. Overall, the identity of the “outsider” and the remembrance of a dark American past were essential histories for Dial to put forth visually.

As Dial began to tackle wider national histories of oppression and contemporary issues of freedom and equality, his work became more simplified in form and color palette and took on a more pluralist vision. In the days and months after the attacks on September 11, 2001, for instance, the artist worked fervently on largescale paintings and sculptures, trying to capture a nation’s emotion and position at the time. The resulting works incorporate elements of past approaches, but are more scaled and focused in their composition. More recent paintings, such as We all Live Under the Same Old Flag (2008) and American Orange Show (2004) similarly convey Dial as the politically-minded, self-reflective artist he has always been, but with a different, perhaps more proud sensibility.