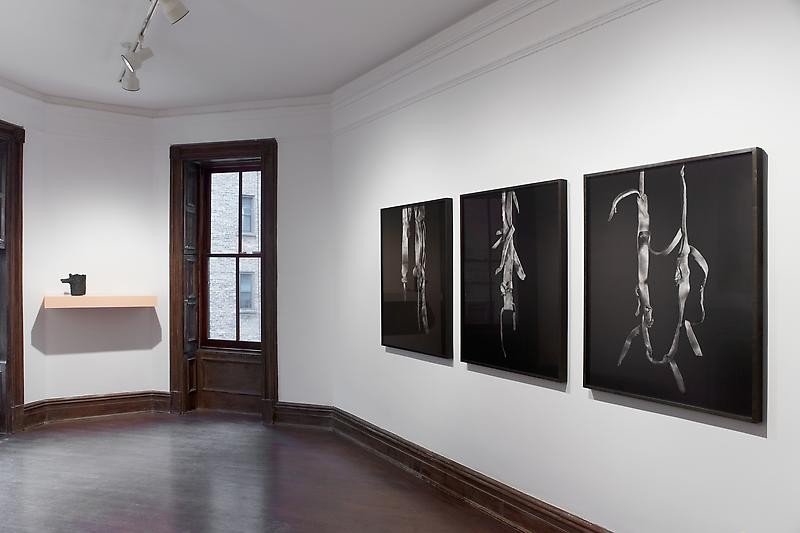 Marianne Boesky Gallery is pleased to present Trieste with new works exclusively created for the exhibition by Jay Heikes, Jessica Jackson Hutchins, Matthew Day Jackson, Karthik Pandian, Lisa Lapinski and Erin Shirreff. This is the second installment of a show that originated at Federica Schiavo Gallery, Rome in 2012.

Trieste is the name of the Italian-built deep-diving bathyscaphe, which in 1960 reached a record maximum depth with a crew of two people (Swiss engineer Jacques Piccard & US Navy Captain Don Walsh) in the deepest known part of the Earth’s oceans known as the Mariana Trench. Their journey took nearly five hours and while only eating chocolate bars and bearing no cameras, they found themselves with a cracked window from the immense pressure and surrounded by a murkiness they had stirred up during their landing. Staying only twenty minutes, they returned to the surface with nothing but a story. Their voyage was recently repeated in 2012 by director James Cameron in a much more documentarian manner. Trieste is also the small port city on the Adriatic in the north of Italy that borders Slovenia, known for its moodiness and changeability. The group exhibition metaphorically takes inspiration from these two “borderline” states and addresses ideas of the unknown and the impossible.

Jay Heikes, who had a leading role in organizing the show, says:

“I can see in all of us a desire to harness the power of everything that has moved through our minds into our works. Through them I can see a grappling with history and culture, a nod or something like an elaboration of the less traveled dead ends that have been lost. I think ‘explorers’ is a goofy word but perfect for all of us who leave ourselves open to explore those spaces as the only places where the possibilities lie. In Matthew’s work I have always found the condensation of historical objects to be both severe and disorienting. As if history was visible like a mountain range, only to realize our eyes are not strong enough to see more than an hour away. In Erin’s work the severity is taken to another level where the formal gaps are not time machines but parameters of claim. Spaces where language appears obsolete but is constant and constantly mutating in order to describe itself. The tools and ‘relics’ of a culture may be as malleable as the materials that made them and Jessica is always aware of the objects that are not only framing us as figures in a space but as messy minds trying to categorize ‘things’. I think that is why her work appears to be a collision of domesticity and surrealism. Like daydreaming the wildest daydream while waiting for your toast to pop up. Then there’s Karthik and I who are both dedicated to forms of research trying to connect the links that history has naturally worked to splinter. Lisa’s work, which was not included in the first version of Trieste seems like a necessary foil for the way we look at history ‘seriously’ and how that approach might in itself be lacking a kind of humanity, as if suddenly realizing cultures of the past were just like us, full of irony, deception and bad jokes. This is why my interest in the double, maybe triple meaning of Trieste is so great, because really it becomes an idea of a place or a space. In 2013 it would be foolish to think that a group of artists would mimic the method of movements a hundred years prior, but I feel so connected to these artists and their approach. My desire to bring them together under one roof is in itself a proclamation of kinship. So with any group show it is impossible to declare what the show will be doing but more about setting up an environment for something special to happen. This is Trieste.”

For further information regarding Trieste or images of the works, please contact Adrian Turner at 212.680.9889 or adrian@marianneboeskygallery.com.

Jay Heikes is known for his heterogeneous practice. His work explores the artistic processes of evolution and regeneration as well as themes of stasis, corrosion, texture, and alchemy. In both nature and culture, Heikes is interested in the idea of life cycles and the notion that mutation and change are essential elements of the creative process. Recently, Heikes has been researching the history of avant-garde language and making connections between tools of everyday function, images of abstraction and shamanistic belief systems in order to formulate his own periodic table for the 21st century. Jay Heikes is represented by Marianne Boesky Gallery, New York, Federica Schiavo Gallery, Rome and Shane Campbell Gallery, Chicago.

Jessica Jackson Hutchins’ mixed media sculptures, ceramics, prints and works on paper are a curious combination of physical gusto tempered by great fragility. Her works act as containers for a wide range of themes – popular and personal, sad and humorous, but always grounded in the messy business of human relationships. Her understanding of collage aesthetics infuses her abstract objects in varying scales, as when she nestles awkward glazed vessels on worn readymade armchairs, couches, and tables, or props them up on lumpen or lean plinths of her own devising. The human body is referenced repeatedly, in all of its dumb charm and joyful habits. Hutchins is consistently able to transform data from daily life into shapes and images that can yield an intimate urgency. Jessica Jackson Hutchins is represented by Laurel Gitlen, New York.

Matthew Day Jackson’s art grapples with ideas such as the evolution of human thought, the fatal attraction of the frontier and the faith man places in technological advancement. His work particularly addresses the myth of the American Dream, exploring the forces of creation, growth, transcendence and death through visions of its failed utopia. Recent work expands on these underlying ideas inherent in the American mythology and focuses on the plurality of this mythology pointing to its existence outside American Culture. Jackson depicts these using the world around him. The diverse materials resonate with symbolism, combining apocalyptic elements with the fruits of new technologies, historical imagery with contemporary ingredients. In his art, ideas are granted physical form and it is in the clash between the two, in the material impact of idealist thought, that it derives its force. His work explores a concept that he terms “the Horriful”, the belief that everything one does has the potential to bring both beauty and horror. Matthew Day Jackson is represented by Hauser & Wirth, New York, London and Zürich and Grimm Gallery, Amsterdam.

Lisa Lapinski delves into the history of symbols and place with the deadpan approach of a decorative anthropologist. Utilizing sculptural installation, photography and collage as her various mediums to present her findings, Lapinski is constantly revealing where the hilarious and mundane are located within cultural semiotic overlaps. Her collapse of old world/new world techniques and gestures leaves us with a collage of the future which often ends up being just a more confused present in which the viewer is left to contemplate modernist juxtapositions that echo her native Los Angeles. Currently her interests lie in the uncanny meeting of materials like tobacco, Plexiglass, wallpaper and Hydrocal. While drawing inspiration from manufacturing in North Carolina and children’s toys from Austria, Lapinski has imagined her own cross- cultural formalism. Lisa Lapinski is represented by Richard Telles Fine Art, Los Angeles and Johann König, Berlin.

Karthik Pandian’s practice seeks to unsettle the contradictions at the heart of the monument. The universal and contingent, sacred and profane, proximate and distant confront one another in his work. Concerned in particular with the way in which history lurks in matter, Pandian often uses 16mm film to excavate sites for fragments of political intensity. The sculptural works that support, enshroud and sometimes obscure his film projections are produced from materials drawn from his research and often assume the form of architectural constructions. Through moving image, sculpture and syntheses of the two, his work imagines freedom in relation to the impositions of architecture. Karthik Pandian is represented by Vilma Gold, London and Rhona Hoffman Gallery, Chicago.

Trained as a sculptor, Erin Shirreff works in multiple media, including photography and video, and her work suggests evocations as diverse as the archeological cataloging of ancient tools, the observation of planets through telescopic devices, and the hulking presence of minimalist sculpture in the landscape. Her sculptures trade on what is absent. Silhouettes of abstract, geometric forms and two-dimensional shapes hover in a temporally ambiguous zone, appearing both made and found. The effectiveness of Shirreff’s conceptual concerns hinges on her selection of subjects that are familiar to the point of becoming enigmatic, leaving us to grapple with how meaning is created in an anonymous visual landscape. Erin Shirreff is represented by Lisa Cooley, New York.
www.marianneboeskygallery.com