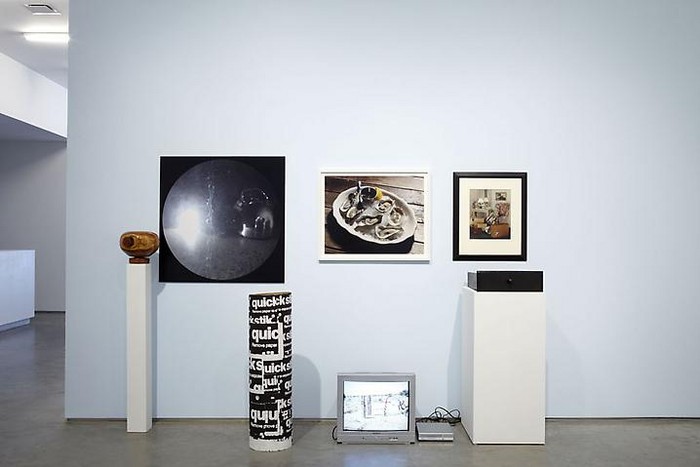 For three years, starting in 1961 (the year I was born), the English literary critic A. Alvarez prepared a series of programs for BBC radio on the intellectual scene in America called "Under Pressure." In these broadcasts, various writers commented on the need for artists to create their own language. This is an extract of what poet Robert Lowell said to Alvarez: "Some artists have impatience with the prosaic, everyday things of life, that sort of whimsical patience that other people may have...they leap for the sublime...what one finds wrong with culture is the monotony of the sublime...Art is always done with both your hands...the artist finds new life in it and almost sheds their outer life.."
Whilst relistening to, and reflecting upon these radio programs recently, it became sadly apparent that facile irony had become one of the dominant philosophical stances of the art world, and that perhaps the artists and artwork I chose for inclusion in Your Gold Teeth II simply had to lay in wait until the Oligarch decade was over. Any artist can hide for a long time in the wilds of their own irony, never rising above the vegetation. But hipness, in the illicit art world sense, feels suddenly puerile, meaningless, a sham, another way of simply buying into the system. One is sick to death of all the posturing.
In contrast, within this group exhibition one senses that boundaries are being tested, and rules of art conduct are being subverted – not subverted where craft is cast aside in favor of studied simplicity such as in the recent Whitney Biennial and Unmonumental exhibitions, but subverted by craft itself. On the contrary, there is a 'muchness' to a great deal of the work in this exhibition. When the cultural bar has recently been lowered to the point of absurdity, the only revenge worthy of the name comes from reestablishing standards lost to laziness and expediency, putting into sharp relief the dreck that surrounds it.
So much of what one sees today is one-sided. Either it is cold and calculated, with a minimum of feeling, or it is a sloppy slum of terrifying emotion. Somewhere in the labyrinth the artists in this exhibition have found individual answers to this balancing act. To give this 'answer' in words is approachable, but ultimately impossible. What is involved is the union of an idea with emotion, precomposition with improvisation, discipline with spontaneity.
These artists have an affinity for the controlled yet significant gesture, the performed essence, a result of concentrated internal selection from a vast repertoire of expressive options. This stripped down approach to craft often obscures a wider technical command than is immediately apparent. If you're looking for order, you will find it. But even when these artists systematically subvert themselves for the devious pleasure of it, they still maintain a level of control where they strange can be made familiar - and vice versa. By eschewing displays of obvious virtuosity, the artist gains the advantage of a kind of mystery.
A good jazz improviser can make one note do the job of many. Incomplete utterances can fully communicate an idea. Imply, don't state. Artwork doesn't have a necessary end goal. Ideas, rendered in these artists' distinctive lo-fi argot, feel aired out and simplified without being rendered trivial. A sense of satisfactory unsatisfaction remains. The artwork featured in Your Gold Teeth II is about the opening up of ideas and approaches, not the pin-point sharpening of them. - Todd Levin, June 2009
www.marianneboeskygallery.com