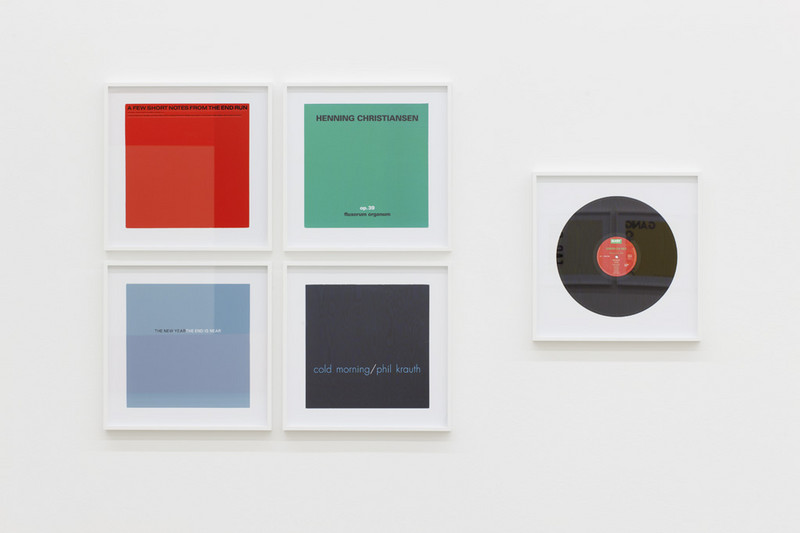 In his paintings Francis Baudevin replicates abstract geometric motifs from the repertory of commercial graphic design. The artist repeatedly takes his reference from pharmaceutical products and record-covers. Then in a further step he removes the text, the name of the brand and the product information. Thus the painting «Rinder, Hunde, Katzen» («cattle, dogs, cats») traces back to the veterinary medicine «Nadigeste» of which the emblem then has been blown up on to the canvas 20 times the size of the original.

As soon as the typography is obliterated a previously unnoticed pictorial composition shows up. The flat formation of few shapes in various colours recall the non-figurative paintings of the Swiss School of Concrete Art. This movement in turn was crucial for Swiss graphic design of the 50s and 60s. Accordingly, the image «Hi Hi» is a further example for Baudevin’s practice of presenting to us both the art historical roots of this work and its function as a logo, considering that its title hints at the same-named record label. The artist comments on modern utopia of autonomous avant-garde painting arising in the years from 1910 to the years after 1930, when the medium of painting had to face its destabilizing factors: the possibility of mechanical reproduction, photography and ready-made. In this respect, especially the movements of Constructivism and Suprematism attempted to realize their idea of Modernist painting.

At first glance, Baudevin’s images seem to represent nothing but themselves.
Though, the images actually represent the idea of abstract or non-objective painting as well as their commercial background. As a matter of fact, they allow a dual reading. Baudevin’s approach points to the vacuum that lies in the demand of nonrepresentative painting: something will be represented anyway. As Olivier Mosset puts it, Baudevin establishes an instable field between abstraction and figuration. The loop from art to the world of commercial design and back again convicts the idealistic claim of Modernist painting aspiring the picture’s pure autonomy and selfreflexiveness and demonstrates its absorption by mass aesthetics instead. Baudevin outwits the categories of abstraction, non-objectivity and figuration. He rather applies these categories, which means, he uses images from pre-existing reality outside the art world to create a sort of meta abstraction or meta nonobjective art.

In Baudevin’s latest photographs of record sleeves and discs, it becomes all the more evident that his artwork displays the sum of those styles and artists he prefers - the result of multiple authors, or rather, of a meta-author, so to speak. The depicted albums stem from completely different genres of experimental music like Rock (e. g. by «The New Year»), Afro-Cuban music, Post Punk, New Wave («Factory record», abbreviated «Fac»), Jazz and the contemporary composer Robert Ashley, who has implemented electronic elements in his operas. On the one hand Baudevin selects these records because of their plain coloured package design, thus recalling monochrome painting. On the other hand it is the names of the musicians and albums that catch his attention as some of them contain the names of colours: inscriptions like «Green on Red», «Red Crayola» or «Yellow Magic Orchestra» become a discreet allusion to painting.

Baudevin’s artwork gives one possible answer to the question how far the commercial aesthetics surrounding us in turn influence contemporary painting. In a post-modern manner he deconstructs the condition of the ubiquitous pictorial world, comprising the process by which these forms have become naturalized. Geometrical figures, circles, arrows, pyramids etc. are legible in every language, they are to be efficient as a communication tool in service of a trademark that can be recognized everywhere in the world. After all, to brand a product is an instrument of power. Ironically, Baudevin works with commodity culture (finally his artwork originals are packages) according to the motto of «beating somebody at their own game». By interrelating the design of a commodity object with Modernist painting Baudevin not only questions the distinction between «high» and «low» but also their status as a work of art both ways.