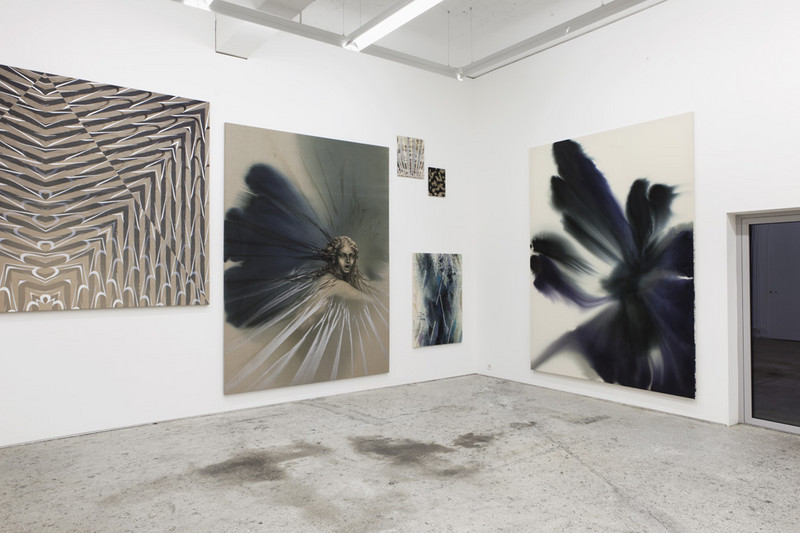 «Apollo» and «Daphne», two striking portraits from Giacomo Santiago Rogado’s exhibition, transport us to the world of Greco-Roman mythology. The story of these two figures—Apollo’s hopeless efforts to win the favors of the mountain nymph Daphne—is recorded in Ovid’s Metamorphoses. Out of vengeance for Apollo’s mockery, Eros shot the god of light and the arts with an arrow of love, making him fall eternally in love with Daphne. She however, having been struck instead by Eros’ arrow of lead with the opposite effect, remained immune to Apollo’s love. Instead, she found herself forced to flee Apollo’s incessant attempts to woo her. Finally, exhausted by the pursuit, she begs her father the river god Peneios to put an end to her distress by altering her appearance from that which had so beguiled Apollo. As Ovid describes, a heavy numbness then took hold of Daphne’s limbs, her skin became covered with tender bark, her feet took root in the soil. Daphne was transformed into a laurel tree. One final time, Apollo tries to kiss his beloved, and he can feel Daphne’s heart still beating, but even as a tree Daphne turns away from him. The urgency of Apollo’s final advances is brilliantly captured by Gian Lorenzo Bernini’s famous marble sculpture «Apollo and Daphne» (ca. 1625, Villa Borghese, Rome), on which the two figurative works by Giacomo Santiago Rogado are based.
The typical Baroque dynamism of the figures lends the depiction of Daphne’s transformation the necessary drama: the movement immanent to the sculpture as well as the facial expression of the figures, as adapted by Rogado for his portraits, capture the intensity of this fleeting moment of final encounter; they make it enduringly retrievable for the beholder.
Rogado’s work also deals with fleeting moments becoming image, and a kind of Baroque illusionism is not only visible in the grisaille portraits based on Bernini’s sculpture, showing Daphne’s ecstatic expression or Apollo’s love-struck gaze, but in the abstract works as well. Targeting visual effects, the appearance is the event: depicted here is a state of affairs committed equally to the painterly technique of its emergence and its visual impact.
«Devoted to the Moment», the evocative title of the exhibition, also raises the question of possible states of a single image, or in more concrete terms, for painterly modes of representing the fleeting, what escapes optical perception all too quickly. If Rogado’s earlier works often achieved their visual charm through oscillating surface effects, the more recent works depart from the once strictly organized and repetitive all-over patterns in favor of freer shapes and movements.
The visual forms are no longer created exclusively by applying paint to a support, but often by way of the direct manipulation of the support itself. In other words, support and paint are immediately intertwined in that the cotton or canvas is stained with textile dyes, treated with pigments or salt solutions, or altered in its color by the use of bleaching materials. The folded or crumpled material is kept in movement, resulting in shadows and knots of color that in turn generate the impression of plasticity and depth. Against these backdrops, the lines and geometrical patterns set themselves apart—they mark a different visual space, floating, as it were, against spatially complex background landscapes.
The illusion is perfect, in works like «Oblivion 2» or «Keel» almost «real», and the folds have such a haptic quality that we think we can touch them. In addition, the fact that each trace lacks a painterly signature feeds the suspicion of a photographic visuality. Even though this suspicion is not substantiated, Rogado’s painting clearly destabilizes our customary perception. In the thick adjacency and superimposition of the presentation, it becomes evident what the artist intends with his titles: attraction in the face of rejection, an emotionally and intellectually challenging vision of one and the same situation. Rogado’s images lead us consciously astray. They demand an active viewer—one who goes beyond content and grasps the act of beholding as part of a play of perception staged by the painter, relishing the experience. It is about the shared exploration of the illusionary qualities of painting, as they have been handed down in a centuries-old tradition, but also the shared examination of the moment that painting marks as a tableau that can be captured with a single look. Rogado’s works lend this moment a different temporality: sometimes they extend it, by condensing it and enlarging it, then again shortening or displacing it. Rogado’s images of the moment do not disappear as quickly as they appear. They remain open for our examination, to be seen and understood.