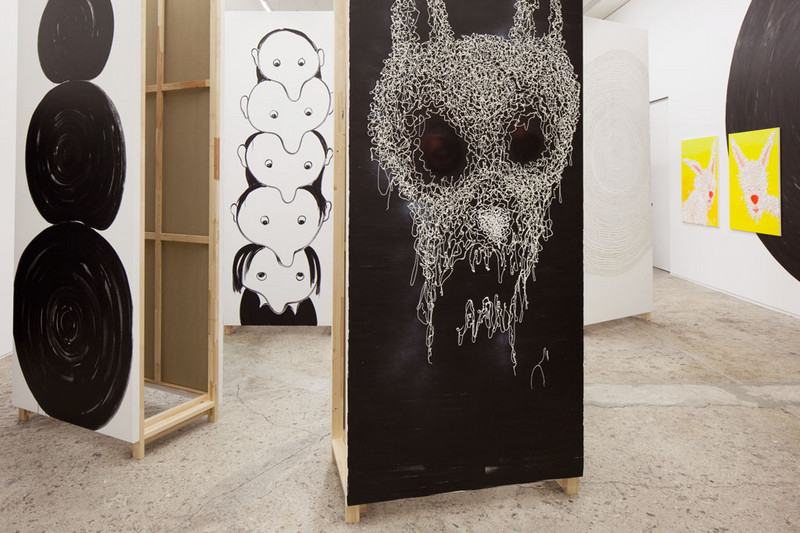 Spring has sprung at Heike Kati Barath’s fourth solo show at Galerie Mark Müller, and the visitors to the exhibition find themselves surrounded by blooming flowers, rabbits, and girls wearing bikinis. The black, round vortex on the wall is like a portal through which one is drawn into a unique world where the precise mood, like so often in Barath’s exhibitions, is not exactly palpable. By way of cleverly chosen selections of ambivalent facial expressions, she is able to generate a mood that lets the moment tip at any moment from being cute to something threatening.

The nine characters located in the middle of the room on wooden supports take over the gallery. The girl wearing a blue bikini, for example, is so engrossed by her mobile phone that she fails to register us at all, while the girl wearing a green bikini stands in our way with her fists clenched. Beside the girls wearing bikinis, there is a group of three figures where the gender could be seen as questionable. They are posed against a dark background, wearing gray overalls and smiling at us. They are up to something, it seems. But what exactly?

As visitors, it’s impossible to avoid combining the figures or setting them in relation to one another. Is Heike Kati Barath asking us to choose one of the nine figures?

Should we join the girl with the mobile without being noticed, or should we risk it and stand up to the fierce-looking girl at the entrance, or dare a conversation with the ominous figures in the dark?

Barath’s painting is always reduced to a minimum that combines in the overall image to form a cast of surprisingly vivid characters. Here, Barath’s technique is a targeted understatement of her art of painting. Even the faceless, video-game like flowers, that are so colorful that they seem to be warning signals, have something vital about them. In that we become so engrossed in questioning the nature of the relationship between ourselves and the figures depicted that we forget we are looking at painting.

As if Heike Kati Barath tried to counter this, the wood scaffolding on its rear is covered with black and white shapes that are reduced purely to the painterly and the processual element of painting.