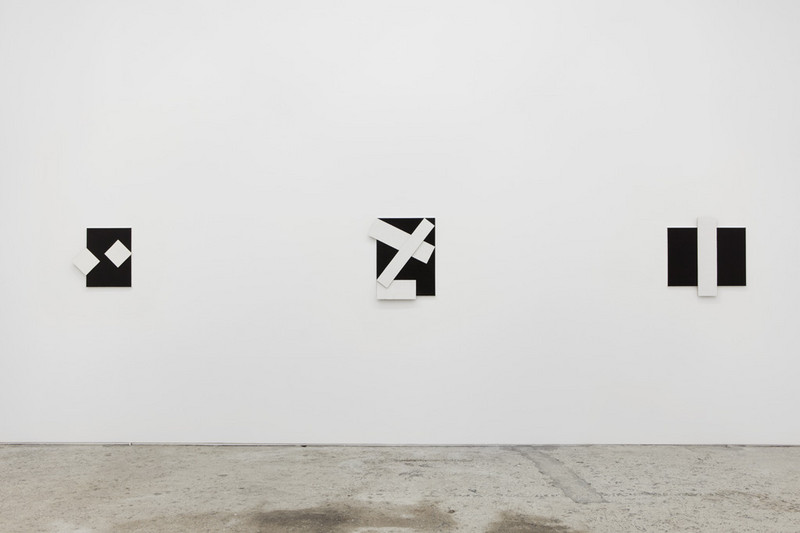 The Experimental Painting Workshop EPW – founded by Nixon in 1990 (but retrospectively including works from 1968 onward) – is not a physical workshop but an intellectual as well as a practical visual investigation into non-representational painting.
The current exhibition at Gallery Mark Müller shows the results of John Nixon’s latest EPW, displaying a series of black and white meta or conceptual paintings on the ideas of painting itself. Again, this exhibition is an example for Nixon’s typical procedure to realize a work in situ and to fix the materials directly within the gallery space in the days before the opening. This time the materials, as canvas and wood, were transported from Australia to Zurich seperately and then fabricated within the exhibition space.

Nixon started to focus on abstraction in the late sixties. In the course of analysing the heritage of abstract painting Nixon continues the project of radical modernism. Thus, within in his EPWs Nixon works on a program of ongoing research about the possibilities of painting after Minimalism, Monochrome, Konstructivism, and non-objectivity. Nevertheless, Nixon holds the view to be an abstract artist within the overall umbrella of abstraction rather than being seen as working within only one specific field of abstraction e.g. concrete art.
To set up an EPW-cycle Nixon determines a rough framework of rules in which to explore the essential formal elements of painting as colour, surface, structure, brushstroke, texture, plane and volume and their relationship among each other. Here the elements focused on are black enamel paint, canvas, wooden boards cut at the sawmill with a rough saw blade and white colour, of the type normally used as a grounding for the linen of the canvas. Throughout the experimentation process these elements then function as a repository to trigger ideas, to trigger compositions in which the relationship between foreground and background, horizontality and verticality, proportion and symmetry is examined. In the course of this experimental analysis a sequence of images emerges. This process is open-ended, whenever the artist feels to somehow have come to a satisfaction with his visual research episode.
By using canvases as a ground in the works in this exhibition Nixon decidedly refers to the medium of painting, emphasizing the painted medium over sculpture. The artist employs the classical element of coated linen on stretcher to then go beyond its borders: the wooden boards frequently cross the limits of the canvas, which could not be managed by colour alone. Another example where Nixon questions the medium of painting is in the silver painting. The silver colour, attached on the industrial wood and a tree bark with their specific textures, reminds one of brushstrokes in paint, although, as a matter of fact, nothing but the material itself is represented here. Appearing not as illusionistic art but as matter the paintings claim the proposal for artistic freedom due to their obvious rupture with the traditional limits of painting and their presence as the materials themselves.

Comparing his paintings to his practice of experimental music one can understand that free experimentation, instead of the skillful virtuosity with which one traditionally masters an instrument, functions as a dooropener to develop his paintings within a natural flow of proceeding through experiment.

On the one hand a central problem to the practice of EPW is the resolution of the individual work within the group, on the other hand at the same time all the different variations of results having arisen from the investigation highlight EPW’s function as visual research.