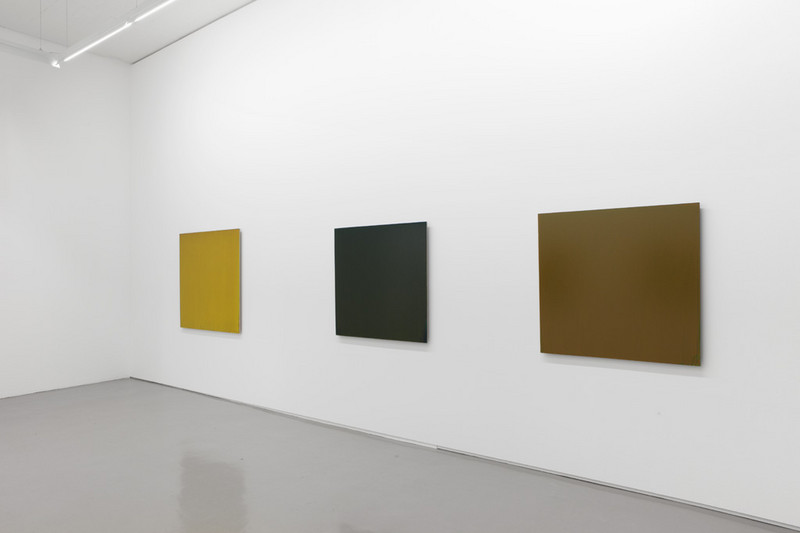 Already the titles of Joseph Marioni’s paintings indicate a certain colour. Thinking of a «Green Painting» or an «Ochre Painting» triggers a certain imagination of colour within our inner eye. Vice versa this is all the same: We are not able to look at a painting of Joseph Marioni without directly naming it with a suitable term for the colour we see, thinking this painting is green, that painting is yellow... But meanwhile we completely forget that colour as a substance with the name «yellow» or «green» primarily does not exist at all.

Joseph Marioni’s radical paintings reduce colour to its physical appearance in the present and challenge the viewer to open up for its immidiate perception as well as for an original sense with which to encounter the artwork. Yet, it has become very unusual for the viewer to perceive colour in a naive way as he confronts the picture with the expectation to now decipher what there is hanging in front of him. A radical painting, however, neither delivers a thought to be decoded nor does it bear any reference to a context that only functions within the dimension of language. Rather, a radical painting emphasizes that not all human conditions are language-based. In fact, the autonomy of colour begins at the boundaries of language.

It becomes obvious here that Marioni, in addition to his relatedness with concrete art, Abstract Expressionism and colourfield painting, has also been influenced by Kasimir Malewitsch’s theory of Suprematism proclaiming pure sensation.

As the artist fleshes out the essential constituents of painting, paint, canvas and support, he frees painting from any illusionism, and thus, at the same time, frees colour from serving pictorialism to have it as a pointed presentation of nothing but itself. The radicality of Marioni's position both lies in the emphasis on the paintings' extreme otherness towards language and Marioni's definition that only the paint image is a true painting: only the paint image represents a fully coherent synthesis of colour, canvas and the act of painting. A paint image arises from the characteristics implicit in the interrelations of the materials and especially inherent in colour itself. In contrast to a line, colour has the tendency to expand into a plane. Therefore colour demands a ground on which to expand, thus being in a logical connection with linen and stretcher.

Furthermore, the painter also takes into account the act of painting as a temporal process, only there the behaviour of colour can unfold. To express it from a more practical standpoint, a painting can only be painted as long as the colour is still wet. Marioni has the liquid paint run down the canvas. To avoid a lip of paint to form at the bottom edge and to allow the excess paint to drip off the painter rounds the lower stretcher bars.

In particular, Marioni distinguishes «paint» and «coulour». The pigment and the binder constitute the chemical substance of liquid paint whereas colour is subject to the physical phenomenon of light. It is only through the interplay of both dimensions that a paint image emerges. This interaction further continues when the viewer comes into play: He or she can never quite separate the perception of colour from the perception of paint as the traces of the fluid paint appear thinner and thicker on different locations of the linen, evoking different colour shades which are not entirely monochrome.

At last, the terms «colour», as a subject to light, and «paint», as a chemical issue, are insufficient constructions of language and actually much too tangled with each other to ever be able to find a verbal solution for it.
Consequently, language indeed comes to an end at this point. The colour instead is self-evident. So let us leave it to the presence of colour to «speak» for itself.