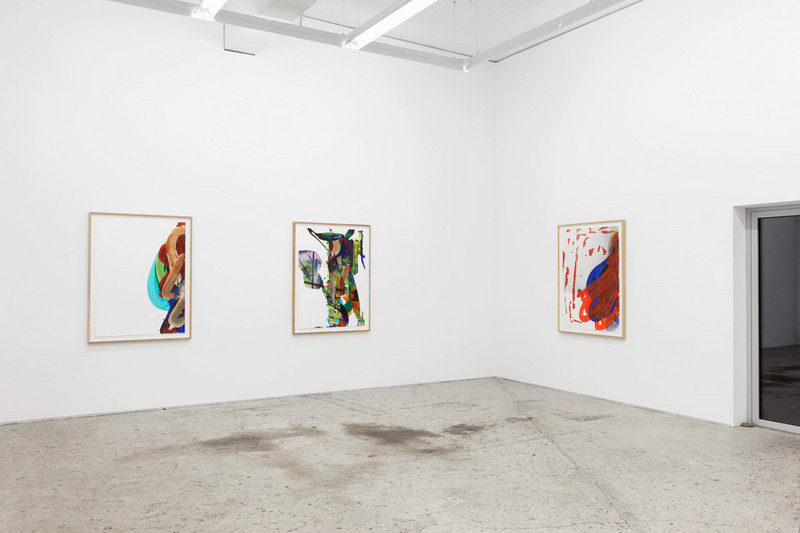 At her seventh solo show at Galerie Mark Müller, Katharina Grosse presents paintings on paper, a group of works by the artist rarely presented so decidedly as a group. The current works shown here illustrate in their consciously chosen and thus concentrated format Grosse’s entire painterly vocabulary, which she has also presented in her highly regarded spatial installations and large panel paintings.

Using painting on paper, Die Ball (The Ball) makes it possible to examine Grosse’s way of painting on the fields of the respective sheets. Traces of paint counteract one another powerfully, overlapping. Stencils set abrupt limits to bold lines, forming distinct silhouette outlines over which the painting captured within can effortlessly break out. The paper of stencils and the image surface, stuck together with paint, tear out and obscure zones of the image. Katharina Grosse uses handmade paper with a specific structure especially well suited to this approach. It also contains the traces of the thumbtacks with which the stencils were affixed, holes in the paper and gaps in the application of color where the tacks had been. Paint appears in generous amounts, forming puddles that run and condense at the margins. It twinkles in individual drops and collects to form airy clouds that gently dissipate at the margins in the next color and fall apart.

In the works developed in this way, the entire breadth of color develops in an exemplary fashion, its light impact and its material presence, which also defines the large scale installations of the artist. In dimensions of up to 120 by 80 cm, the format proves to be a frame for painting that emphasizes what it contains. At the same time, the margins dissolve under the claim of dynamism in the application of paint and thus point beyond the sheet. The sequence and order of application of paint are in Grosse’s work generally suspended in adjacency and conjunction.

In the respective sheets, she realizes various world of color that are polyvalent in a way that is typical for her work, and at the same time use an autonomous and decisive field of valence. This is reflected in decisions for formal principles and directions in the movement of the application of paint. In Grosse’s works on paper, the richness of her painting is shown, adjacent, accentuated, and thus open in an exemplary way. The quite limited paper format makes these paintings appear symptomatic and creates in the accentuation of the motifs the possibility of experimentation and self-reassurance for the artist.

Katharina Grosse, born in Freiburg im Breisgau in 1961, lives and works in Berlin.
Since 2010 she has been professor for painting at Kunstakademie Düsseldorf. She has participated in numerous solo and group shows as well as commissioned works in public space, for example, Just Two of Us, initiated by the New York Public Art Fund, and Psychylustro her largest painting in public space to date for the mural arts program in Philadelphia. For the awarding of the Oskar Schlemmer Preis to the artist, Staatsgalerie Stuttgart will be presenting her work until Sept. 7, 2014. Her solo show “Wer, Du, Wen, ich?” will be on view at Kunsthaus Graz until Oct. 12, 2014, and on Sept. 28, 2014 her show Inside the Speaker will open at Museum Kunstpalast, Düsseldorf.
www.markmueller.ch