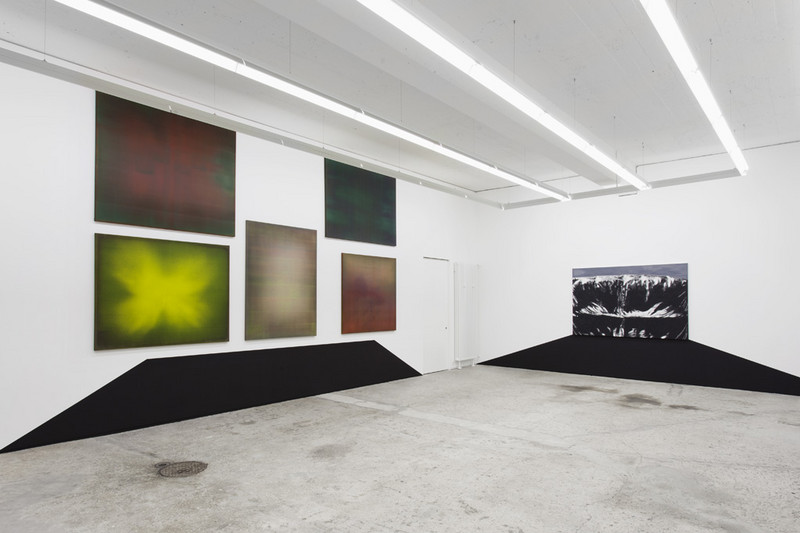 At the exhibition “Aussicht” (Outlook), Nils Nova refers to the preexisting gallery space. On the walls, black surfaces are painted that on the one hand expand the ground of the exhibition space in terms of perspective, while at the same time representing pedestals. Nova plays with various possibilities that result in approaching the wall paintings and the hanging of the individual pieces on the canvas, whereby the two represent both three-dimensionality and a new surface quality: on the one hand, a work is placed directly on the edge of a black trapezoid, while in another case the wall painting and actual painting overlap. As soon as we concentrate only on the paintings themselves, they take on a spatial depth despite their two-dimensionality. This is made especially clear in the group of five paintings placed above the wall drawing. They hardly refer to the wall painting and its suggested perspectives, seeming almost to hover on the white gallery wall. Or, it could also be said that both the pictures themselves and the wall drawing refuse to rely on either their spatial or their surface quality.

In the black and white paintings “Close-Up (No. 22)” and “Long Shot (No. 1)” Nova uses a photographic source, referring to photography as a medium, i.e., drawing with light. By way of the enormous enlargement of a certain part of the photographic model, he translates the starting medium into abstract painting. A clear recognition of the original motif is thus rendered improbable. Instead, the process of recognition is ambivalent, that is, the recognition of the actually depicted object and possible projections of our own visual world on the painted surface could equally result. As in the example “Close Up”: we might think the picture depicts a mountain, then suddenly to realize that at issue is a dramatically enlarged section of a sofa. Here, Nova stages a contemporary form of traditional trompe l’œil, disturbing the perception of the beholder, or, seen differently, inspiring fantasy.

In the work group entitled “Projection Surface” or the work “Flow Interference”, Nova uses no starting photograph, but explores the problem of painting starting from scratch. By applying various paints in thin, veil-like layers, especially using complementary colors, the colors separate from one another, while at the same time creating an oscillating effect in which several colors can be seen at the same time. The color surfaces overlap, creating the impression of a lack of focus or fog. With this lack of focus, each beholder sees something on his or her own. Even if a spatial impression is provoked by the oscillating colors, it serves merely as an activating field. Associations that appear here can never be surely established. The beholder ultimately defines what is seen.

Even if Nova’s work primarily developed in borrowing from the non-figurative European painting of the late 20th century, at issue for him as an artist of the media age is by no means just a discussion of the viability of painting alone, but a reflection and a study of the image in the sense of the real, the imagined, and remembered space. For his research process, he takes recourse on the one hand to his own private photographs and also to found footage. On the other hand, he uses the circumstance that each and every physical impression is accompanied by his own surroundings, television, dreams, in an unconscious level of color and spatial memories that are constantly part of his experience of reality. Both levels meet in perception, without it being possible to separate highly personal, individual memory from external impressions, collective memory. The gallery becomes the place of collective and individual visual experience.

In the work “Empty Center (Stripes)”, actual paint accumulates towards the margins of the canvas, playing out primarily in the periphery of the image. It returns to the tradition of pictures such as Empty Center from 2002, although Nova later also used polished stainless steel plates as a foundation for his paintings (2009), at the center of which the beholder was reflected and thus confronted with the simultaneous situation of real and virtual space in a direct way. The emptiness in the center of the image could be read as a liberation from the already enriched visual ballast or illustrate that a primary gaze is scarcely possible free of such ballast.

Reality and imagination are always already there. As Kant argues, pure reason would remain blind in the process of cognition if it did not have access to sensory impressions or the inner imaginative faculty. Nova evokes just such a relative blindness in his images in that by oscillating the colors a “disappearing” moment on the side of the object is observed, thus triggering a turn to the beholding subject within the process of experience. Almost unnoticeably, the role of the historically constituted beholder subject blurs with that of the object created by the artist himself, whereby it remains unclear where the beholder as it were is presented with a mirror, where his own perception, his own visual memories are realized, and from what point the artist transports certain content and messages.

All these works share the surface as a site for the emergence of visual fiction.
Against the backdrop of the exhibition title “Aussicht” (Outlook), the view of an image as a window and the role of the paintings shown as surfaces for illusions or projections becomes clear, but not without the possibility that they could also be simply non-figurative art. The integration of reality and ideality, of the self-evidence of painting and its mimetic moments becomes understandable in light of the bicultural roots of the artist in Switzerland and El Salvador. What remains is a swaying back and forth in the field of tension between the surface and spatial illusion, figuration and abstraction.