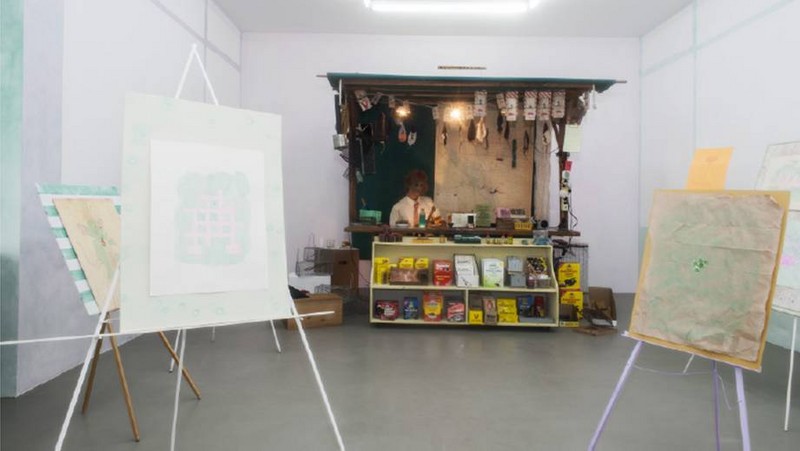 ...It was just a story of about people and rats. The difficult part of it was deciding who the people were, and who were the rats.
The artist, an anonymous wax figure sitting inside a market stall, is the central figure in the installation. He can be seen as an intermediary for looking at different viewpoints on the relationship of humans to rats. His main job is selling rat poison and traps, but also he has the desire to be an artist, possibly inspired by the materials located around him. He extinguishes, but he also creates. His position towards rats is therefore kept unsolved.
When the rats run riot.

An Ultrasonic Flute (2013-2014) is an interrogation into the historical relationship between humans and rats. The peculiar role that rats play for humans to be seen as something negative is one of the reasons for the continual wish to eradicate them (behind the artist for instance hangs a map of Alberta, a province in Canada which is said to be rat-free). This view is partially based on the history of rats as the carrier of the plague – which is a common misunderstanding as the plague was carried by fleas on the backs of rats. The role of the rat varies in cultures and times throughout the world; for instance in the Karna Mati Temple in Rajasthan, India, which is devoted solely to rats, or in the tradition of the pet rat which has its origins in the rat-baiting blood sports of the 18th/19th century. The dead rats in the installation on view are apparently for sale but their position is also unclear; are they advertisements, hunting trophies, evidence of their eradication in a certain area, or do they ultimately serve a different purpose?

What are rats? –They are mice.

The paintings made by the artist, done with different brands of rat poison on materials such as paper, cardboard and wood, are spread over the exhibition space, installed on handmade easels. Some of these stands contain more than one painting and together they take on a sculptural quality. The paintings depict different motifs such as mazes, landscapes, rat-related imagery and simple formal gestures, which all come forth from a mind obsessed with his other occupation.

...The rats they can never hear. The rats, the rats in the walls.

The walls of the exhibition space are painted in the same green and pink that rat poison comes in. These murals refer to the actual walls and windows which can be found behind the built-in walls of the gallery space (unpainted where the windows are), and as such are an inverse depiction of the existing structure, subtly referring to the rats possibly living between the walls.

This work was perceived and first shown in The Intellection of Lady Spider House, a group exhibition curated by Geoffrey Farmer at the Art Gallery of Alberta, Edmonton, Canada (2013). For the exhibition here the installation has been expanded with new murals and paintings on easels and stands.
www.markusluettgen.de