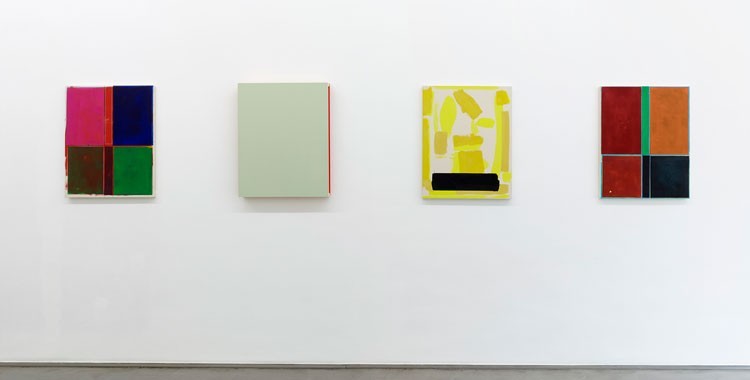 Thinking through painting
Elodie Evers in conversation with Matt Connors

You went to Bennington College, in Vermont, a small college with a rich history in the arts, and painting in particular. Jackson Pollock had his first show there, Martha Graham started her company there, Paul Feeley ran the art department . . . How did the education there shape your own artistic approach? You seem to float freely between different schools with a specific interest in sampling and mixing the tropes of modernism.

When I went to college I moved as far away as possible from Southern California, both physically and philosophically. It was a sort of fertile and productive form of self-imposed alienation that, looking back now, has kind of become a model for living for me, and especially a model for working. Putting myself into a really open and vulnerable position and simultaneously being exposed to such a unknown (to me) rich history, really acted like a giant shove in many ways, a scenario I now take great pains to recreate... I was really lucky to be in a place that was so historically dedicated to art and really, contemporary art as well, and to be treated like an actual artist, during the early to mid nineties, which, not just at Bennington, but in the (art)world at large felt really exciting and full of possibilities.

Your work is grounded in the everyday and incorporates elements from your surroundings. You often use a raw canvas and take rubbings from your studio floor, pouring layers of paint into the fabric like dye. Somebody wrote that the paint doesn’t end up on (but rather in) your paintings, which I think is a very apt description. How do you achieve these very thin surfaces?

By using all of my art supplies incorrectly. No, basically quite a while ago, I abandoned what is typically thought of as a painter’s first step, which is to prime the canvas, as it seemed like a fairly dramatic and impactful action, and one that shouldn’t be taken for granted. In doing this, I gained access to the inner space, or the weave of the canvas, which is normally masked or blocked out by traditional priming.

What are the different steps until you arrive at a “finished” piece? Do you make drawings at all?

Structural and color ideas and references can be kicking around in my brain and in the margins of my notebooks for years, but then will be executed in minutes. And they may not work and will then get painted over, or cut out, or the back side of it will seem interesting and create a new idea, and then that will begin another slow process, that in the end will most likely be “finished” with a really fast gesture or idea. I am resistant to the idea of labor, as it traditionally exists as a marker of meaning and value in art. This idea of time and “elbow grease” and verisimilitude automatically signifying anything seems false to me.

So the structure of your works is generative or do you have a plan when you start?

The generative part of my work has to do with an attitude of permission that I have in the studio. I pay close attention to what I like and dislike, with accidents and collateral mark making and structures that occur while I am working. If something comes into being in my studio, it’s fair game for being recycled back into the work, no matter whether it’s a stick that I’ve positioned in front of a painting, the back side of a painting, or the shape of a drip. I’m also fairly brutal with my own ideas. I will change or abandon them if another idea supersedes, or as soon as they stop making sense for me. This can create a strange lineage between works, that can be visual and at times purely conceptual and it can also create intense discontinuity, both of which are extremely important to me. It follows the poetic combination of two things creating a third, which is the guiding logic of my studio.

Your new body of work is titled Bottoms. It seems that you’ve followed a certain set of rules. They all have the same format and a grid structure. Their weight seems to rest on the bottom of the works—hence the title?

I was finding that my spontaneously derived compositions were falling into this general compositional pattern and I have been wanting to really further explore the possibilities of a more intense seriality than I’ve tried previously. This format seemed like a kind of readymade, within which I could really play, especially with the dynamics of color. Then it seemed funny and kind of apt to also refer to sexual dynamics at the same time (at least in English).

Would you say that you are constantly experimenting with extending the borders of your work?

Yes, I think so. Even in so much that with this group of works, I’ve kind of retreated in scale and direction in a somewhat reversed effort to “extend” what I’ve been working on, or thinking about—focusing all of the “action,” so to speak, within the paintings themselves rather than through their physical form or installation. They are fairly small scale and meant to be hung in very straight/traditional way, and in that way – to me at least, resist what I was worried about as a sort of dependency on the strictly “physical” extension of the physical painting form(s) rather than any kind of internal extension.

Your work does not represent a painting concept based on essence and also does not exhaust itself in the mere treatment of media-specific issues. How would you locate your own practice in the contemporary discourse on painting, which has, of course, been dead for a long time and then rises from the grave time and time again? One reading – as the current group show on abstract painting at MoMA that you are in suggests – is, that painting today is atemporal and that substantial newness in painting is hoary.

At the end of the day, my favorite paintings and painters, works and people that I feel like I have a dialogue with the most about painting, are really just extremely PRESENT (as opposed to distanced or ironic) in their engagement with painting, excited to be thinking through painting and not too worried about newness or oldness, and certainly not the death or life of painting. I can’t allow for the idea that painting is any more or less valid a form of artistic inquiry, as it’s just the way I think and process the world and my experience in it.
www.markusluettgen.de