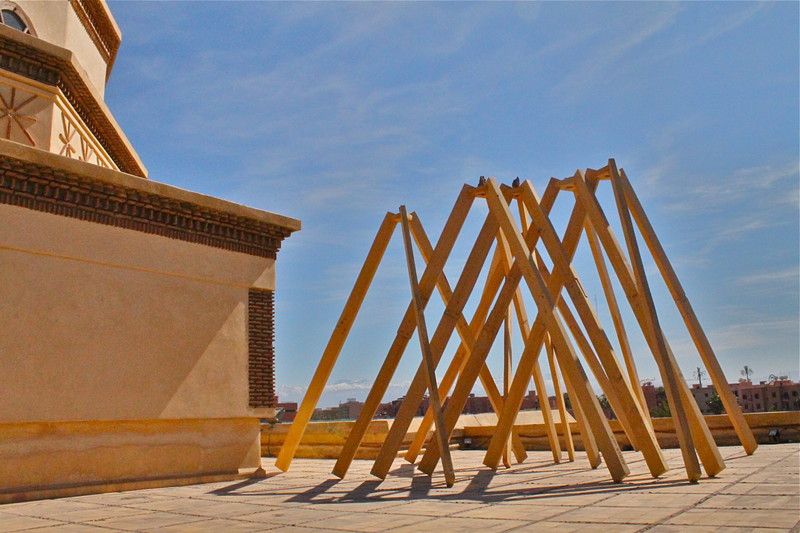 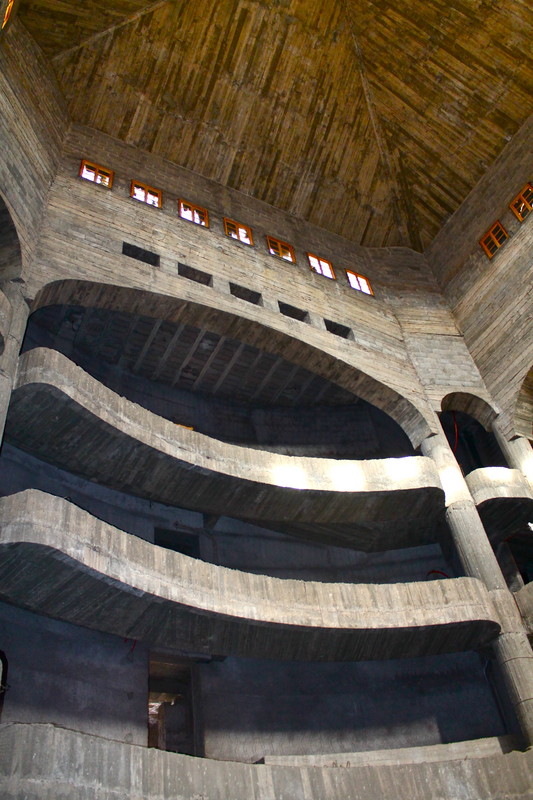 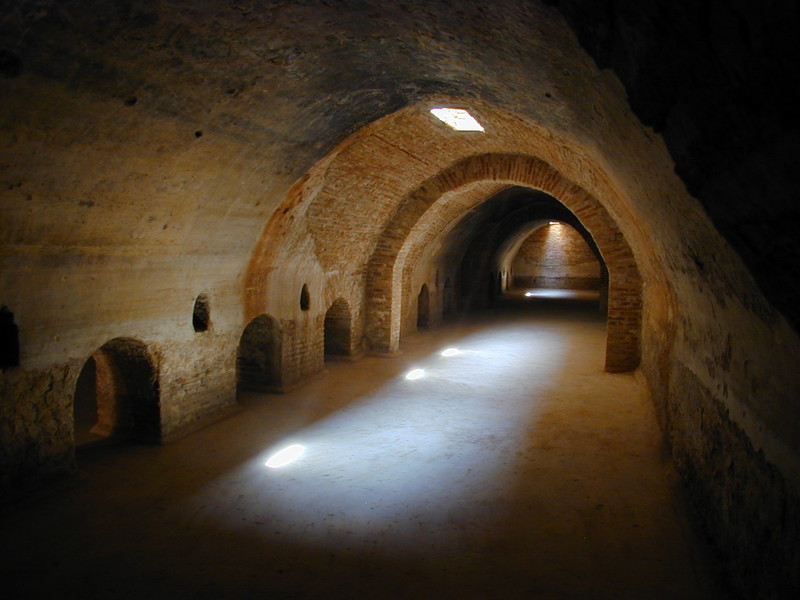 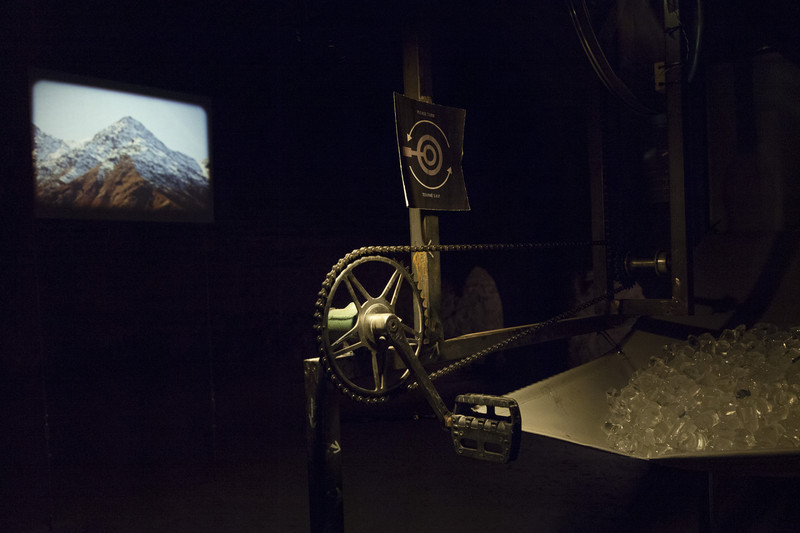 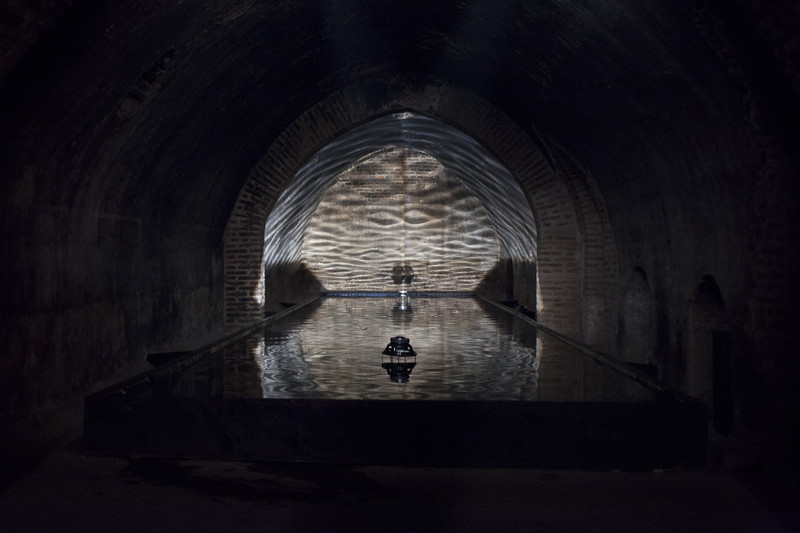 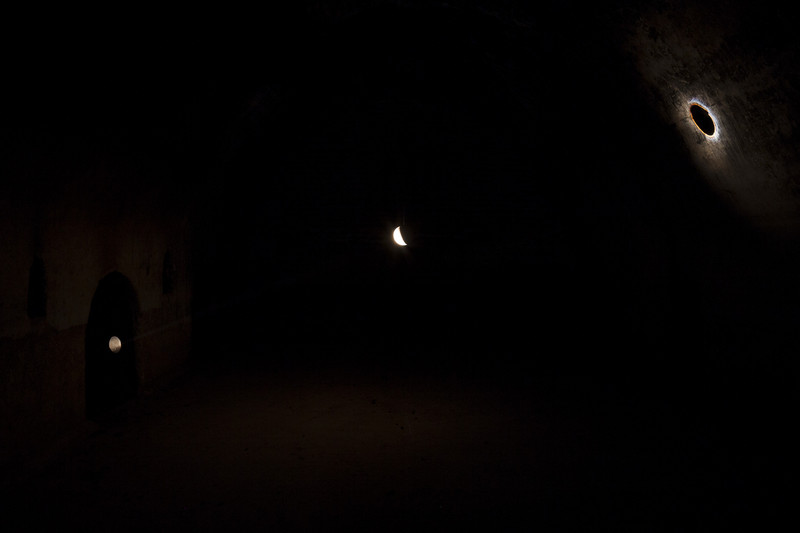 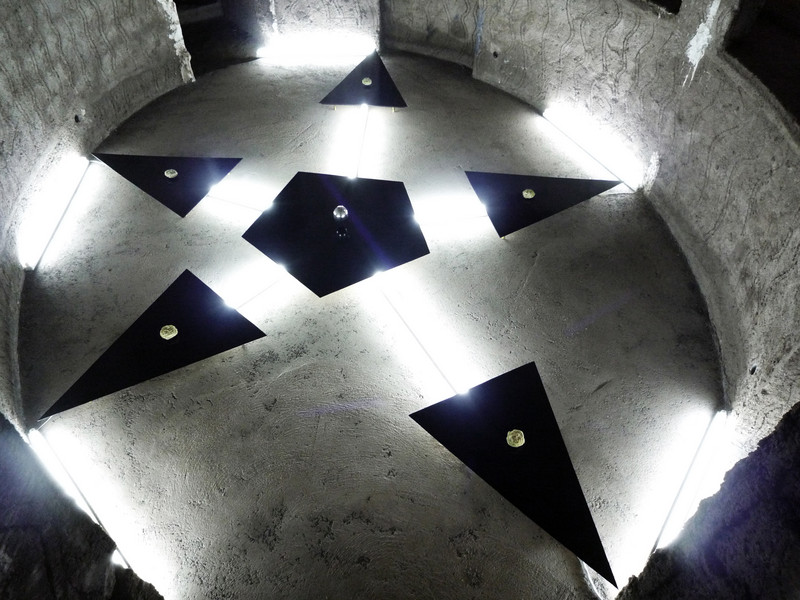 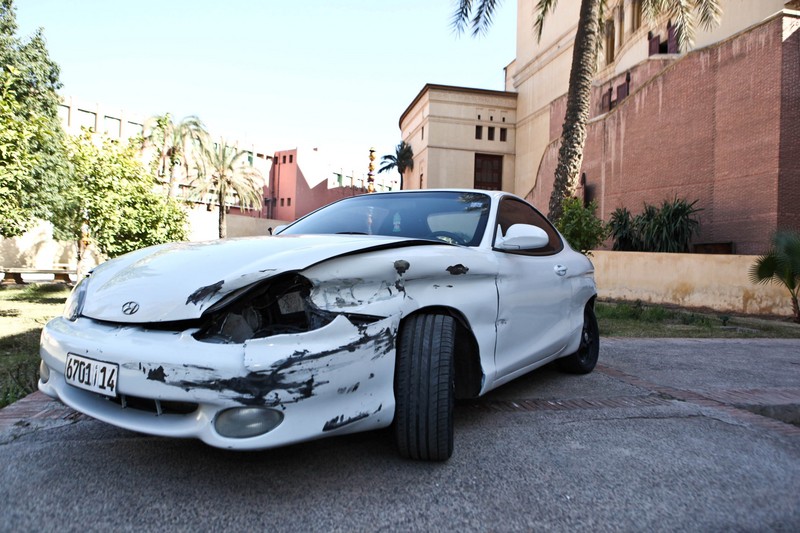 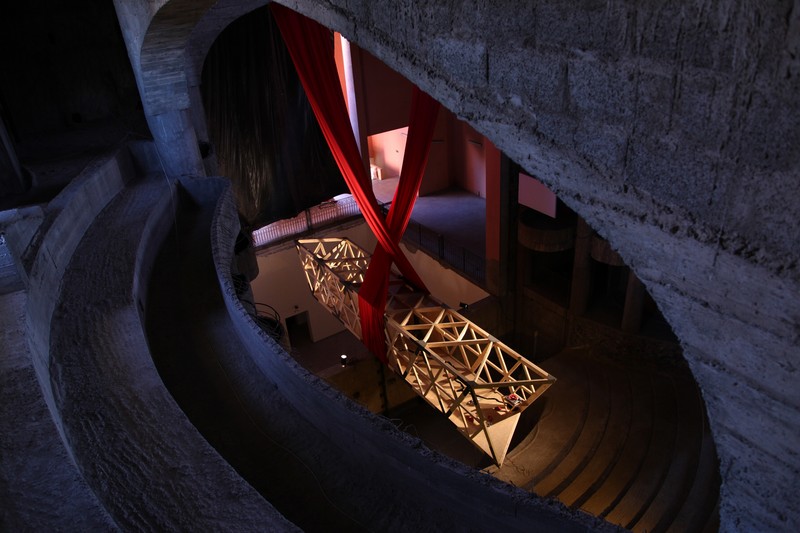 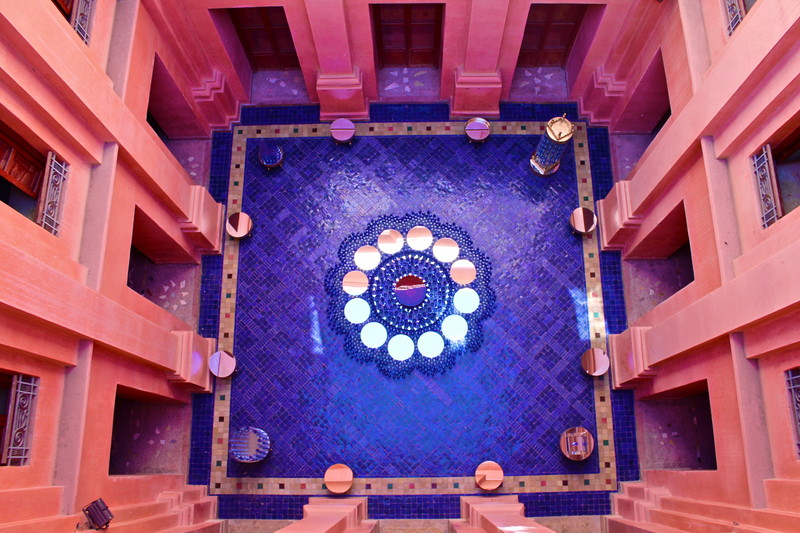 High connotes reverie and transcendence: Higher Atlas suggests a cartography of the beyond. The title also refers to surrounding geography, as the Atlas Mountains are visible from all the biennial sites. In this respect, the exhibition is a starting point for a series of trips, both virtual and physical; Other worlds begin at one’s feet. This thesis is explored through site-specific art, architectural, musical and textual interventions. A layered context emerges from the particularity of the exhibition experience, articulating the blurred boundaries between historically discrete spheres, and the conjunction of local and global conditions.
Dispersed among the Théâtre Royal, a building that remains incomplete; the Koutoubia cisterns, which lie beneath the foundations of a previous mosque; the Bank Al-Maghrib building, located on the south side of the perpetually bustling Djemaa el-Fna square; the Cyber Parc Arsat Moulay Abdeslam; and at Dar Al-Ma’mûn foundation, Higher Atlas engages Marrakech by underlining the contemporary relevance of civic, rural and historical sites through the work of international participants. The exhibition, which features work from 37 participants, constitutes a shared platform for diverse demographics, initiating dialogues that produce new, consensual realities.

Carson Chan (1980) is an architecture writer and curator. Chan studied design, history and theory of architecture at both Cornell and Harvard University, where he received a Master's in the History and Theory of Architecture. After working at Barkow Leibinger Architects and the Neue Nationalgalerie's architecture exhibitions department in Berlin, with Fotini Lazaridou-Hatzigoga, he founded PROGRAM in 2006, a non-commercial initiative for art and architecture collaborations. He has variously curated and overseen more than 30 international exhibitions of contemporary art and architecture. His writing on art, architecture and contemporary culture appears in books and periodicals worldwide, including Kaleidoscope and 032c (Berlin), where he is also a contributing editor. Chan has interviewed a broad range of contemporary practitioners, including Thomas Demand, Udo Kittelmann, Adam Caruso, Olafur Eliasson, William T. Vollmann, MVRDV, Greg Lynn, Kevin Kelly, Rick Owens, and David Simon. He has recently lectured at the Schaulager (Basel), GAMeC (Bergamo), 12th Venice Architecture Biennial/Nordic Pavilion, Bund Deutsche Architekten (Berlin), 0047 (Oslo) and he will be speaking at the Fondazione Ratti (Como) this spring. Chan is an active advisor to several cultural institutions including DLD (Munich), Europan, and the Premio Furla - a biennial prize given to the most promising emerging artists in Italy. In 2008 he organized an evening of panel discussions at the Neue Nationalgalerie (Berlin) with leading artists, architects and curators to commemorate the 40th anniversary of the Mies van der Rohe building. He is currently working on a series of essays on exhibition making in both art and architecture.

Nadim Samman is an independent curator and art historian based in London. He read Philosophy at University College London before undertaking a doctorate at the Courtauld Institute of Art. He has written for publications including Third Text, The Art Newspaper, Art Review (Online), Contemporary, Asian Affairs, Art India, Erotic Review, Naked Punch and WestEast. He has also been an invited speaker at MoMA Warsaw, the 2009 Beijing Biennale, Christies and SoAs. His curatorial projects in London, Moscow, Berlin and Zurich have included presentations of leading Russian modern and contemporary artists, emerging international talent and, recently, a large-scale photography exhibition at Somerset House (London) under the patronage of HRH Prince William. In June 2011 Nadim co-curates One of A Thousand Ways to Defeat Entropy, an Official Collateral Project of the 54thVenice Biennale, held at the Arsenale Novissimo.

Dar al-Ma'mûn Conversations, part of the Marrakech Biennale 2012
As part of the Marrakech Biennale, Dar al-Ma'mûn (International residency centre for artists and literary translators) will hold three conversations about art and its relationship with the city, to be held in the Riad Denise Masson in partnership with the Institut français de Marrakech on Wednesday, 29 February and Thursday 1st March 2012.

Wednesday, February 29, 2.30pm to 4.30pm
Artistic identities in Africa and the Middle East

WJT Mitchell (theorist of art, media and literature, University of Chicago, and editor of the journal Critical Inquiry), in conversation with Rasha Salti (independent art critic, curator and film programmer) and Omar Berrada(director of the Dar al-Ma'mûn library).

Thursday March 1st, 10am to 12pm
Art and public space

Marrakech Biennale is a Moroccan biennale of contemporary international culture. In February of 2012, Marrakech Biennale will launch its fourth edition, Free Thinking Surrender, featuring key figures in literature, film and visual arts. From the 29th Feburary – 4th March 2012, public screenings, talks, performances and debates will take place at venues around the city. Higher Atlas, an exhibition curated by Carson Chan and Nadim Samman, will be on view until June 3, 2012. Alan Yentob, creative director of the BBC, returns this year as the organizer of the film program, and Omar Berrada with Elizabeth Sheinkman will organize the literature events.

With each biennial, Marrakech Biennale strives to collaborate with local universities and craftsmen, to build a platform that promotes Marrakech’s position within the international sphere. Through partnerships with African and international voices, the Biennale aims to support a Moroccan cultural identity that is both locally rooted and internationally relevant. Developed for this upcoming edition, the Marrakech Biennale will establish workshops for children lead by local and international cultural practitioners to promote access to contemporary culture for all ages. These three months aim to highlight Morocco as a dynamic hub for current ideas and to establish its continued intellectual involvement on an international stage.
Past participants have included Francis Alys, Yto Barrada, John Boorman, Richard E. Grant, Edmond El Maleh, Tracy Emin, Pieter Hugo, Isaac Julien, Abdellah Karroum, Joseph Kosuth, Julien Schnabel, Zadie Smith, Abdellah Taia.
In 2004 with the rise of global tensions, Vanessa Branson envisioned a cultural festival that would address social issues through the arts, using them as a vehicle for debate and discussion and to build bridges between diverse ideologies. Marrakech Biennale would become a celebration of creativity in a city that has been the focus of artistic exploration for centuries but with limited emphasis on contemporary art. Begining in 2005, as a gathering of arts enthusiasts who organized literary events and exhibitions. Marrakech Biennale has grown to become an internationally recognised biennale with a thriving visual arts, film and literature programme. The festival’s role has evolved along with the climate of the times. With today’s events in North Africa, the organization’s goals could not be more pertinent for the cultural identity of the region. This festival aims to show the outside world that Morocco is an open society that encourages freedom of expression and debate, as well as sponsoring significant and lasting benefits for the area and its inhabitants, socially, economically and culturally.
www.marrakechbiennale.org