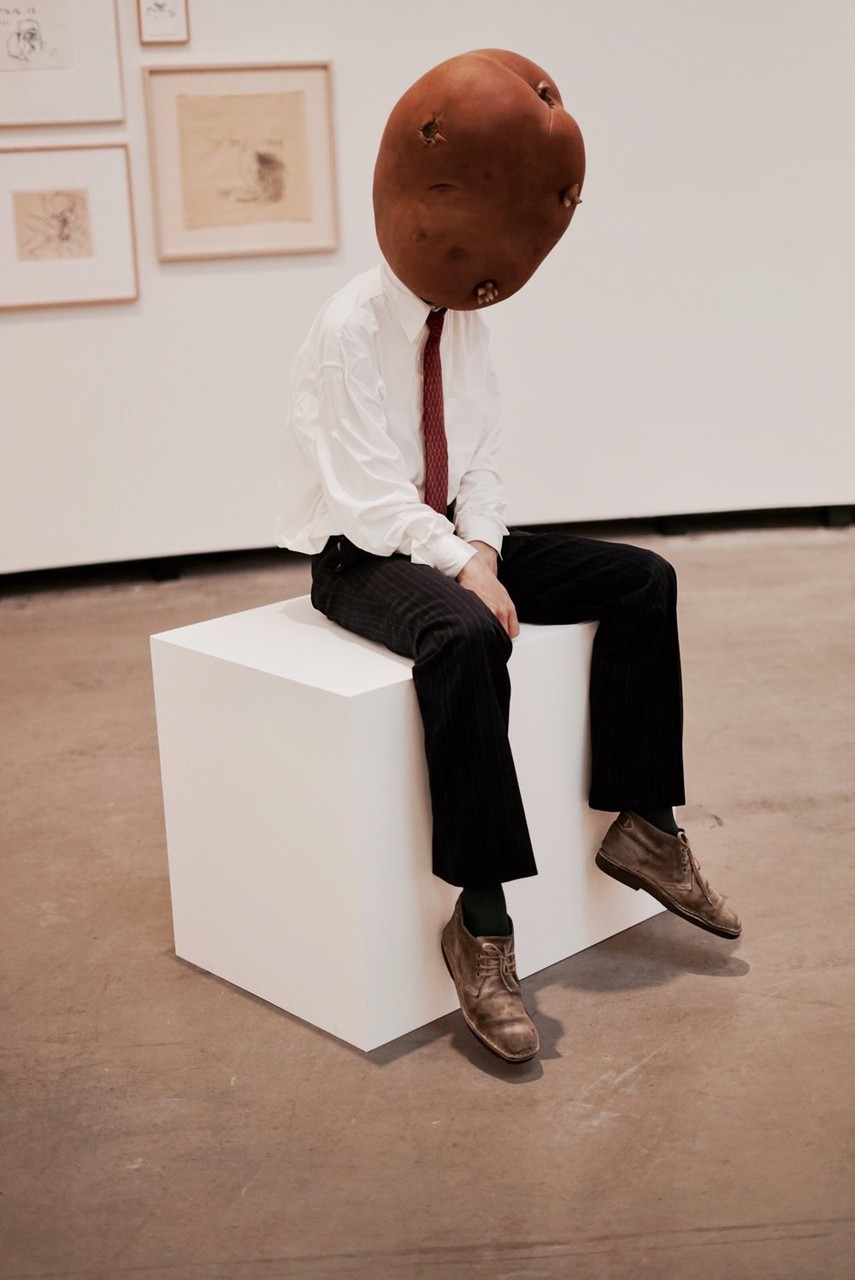 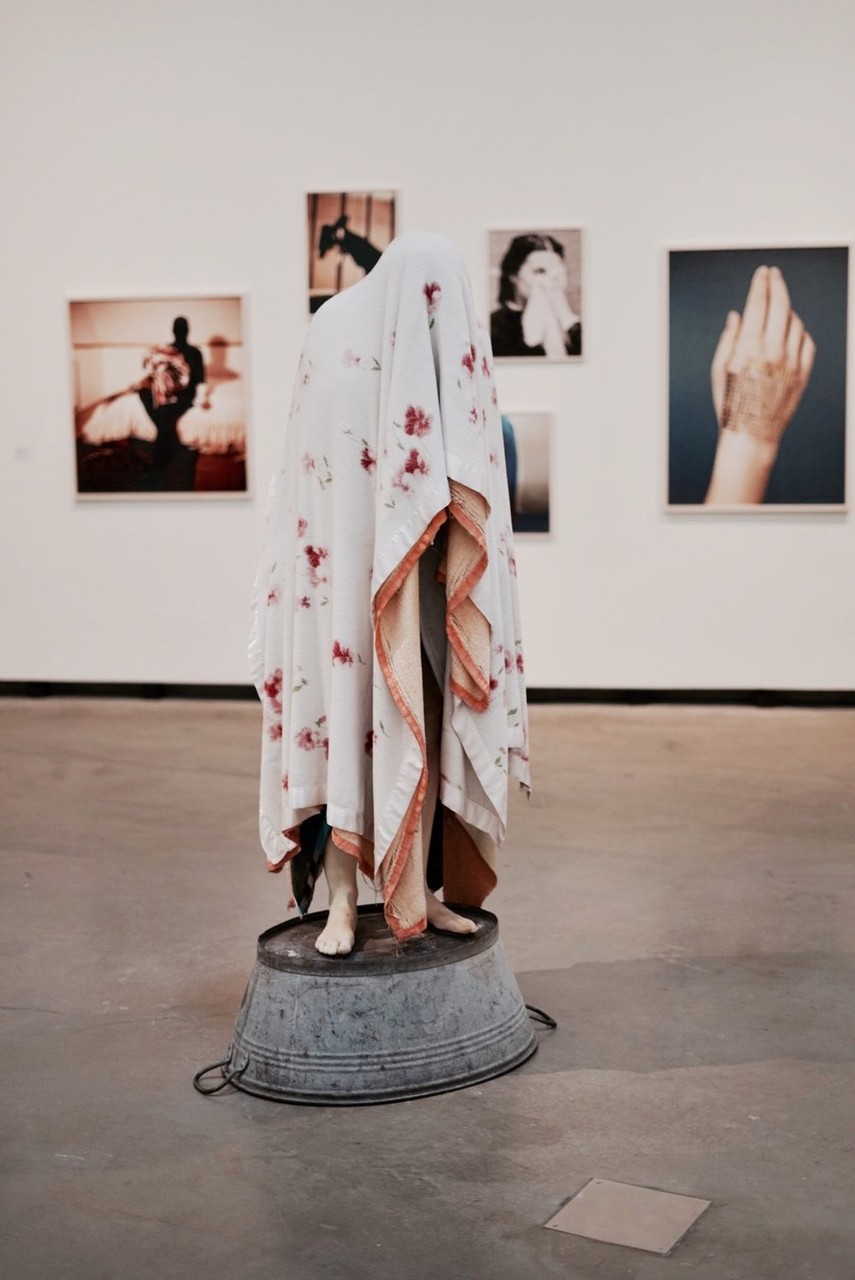 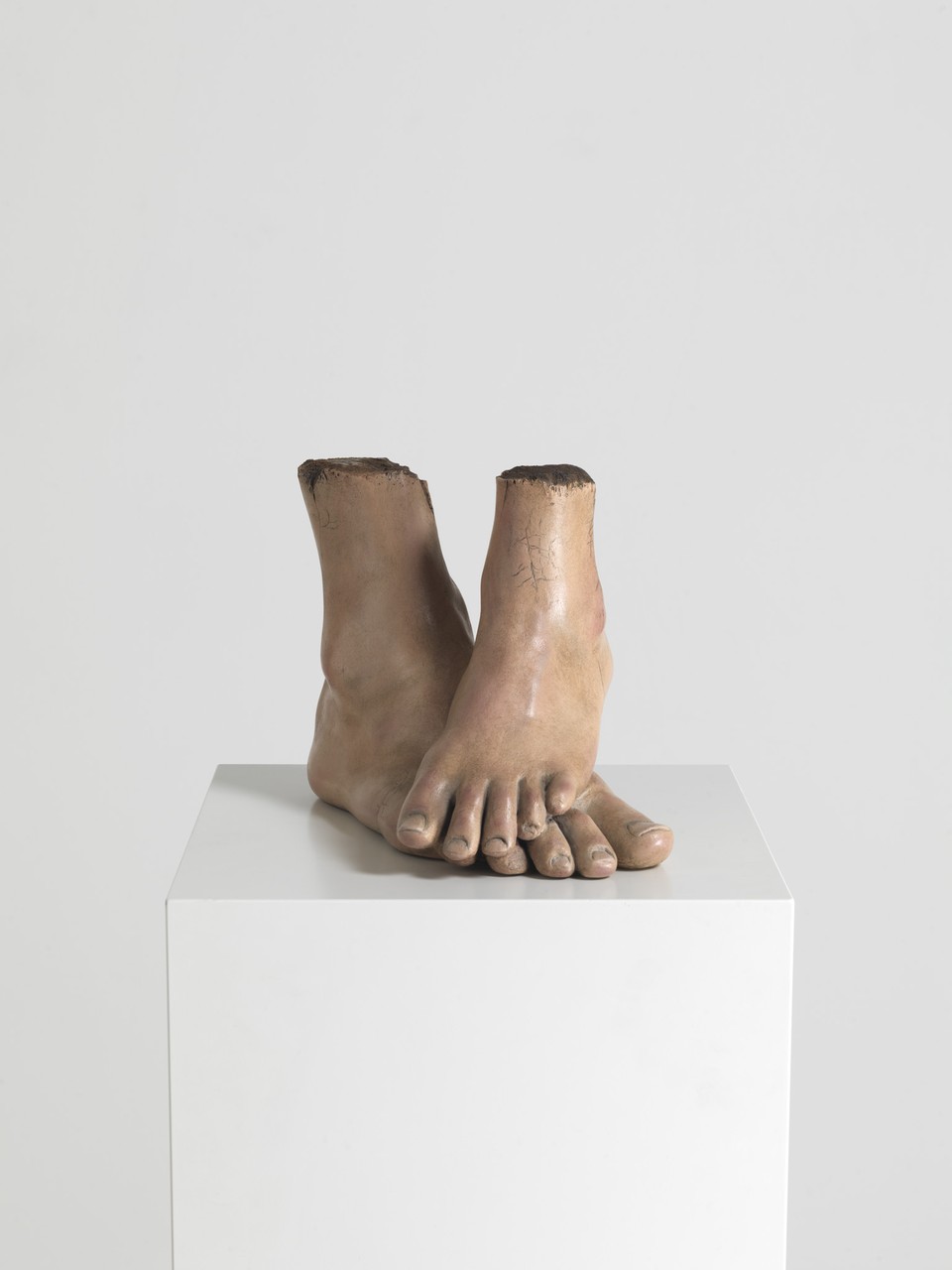 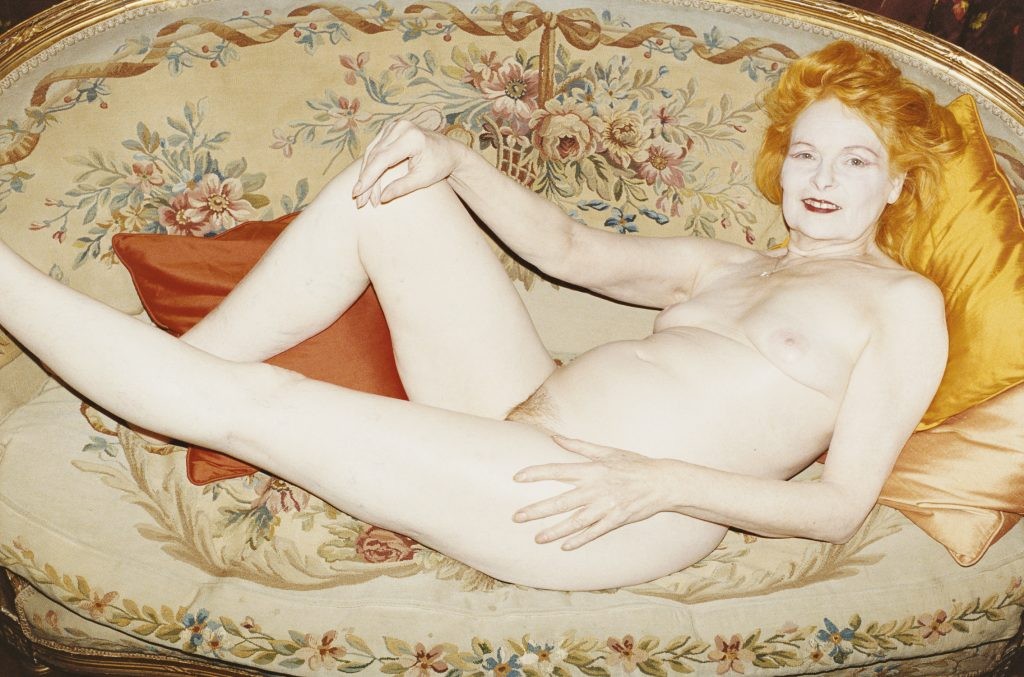 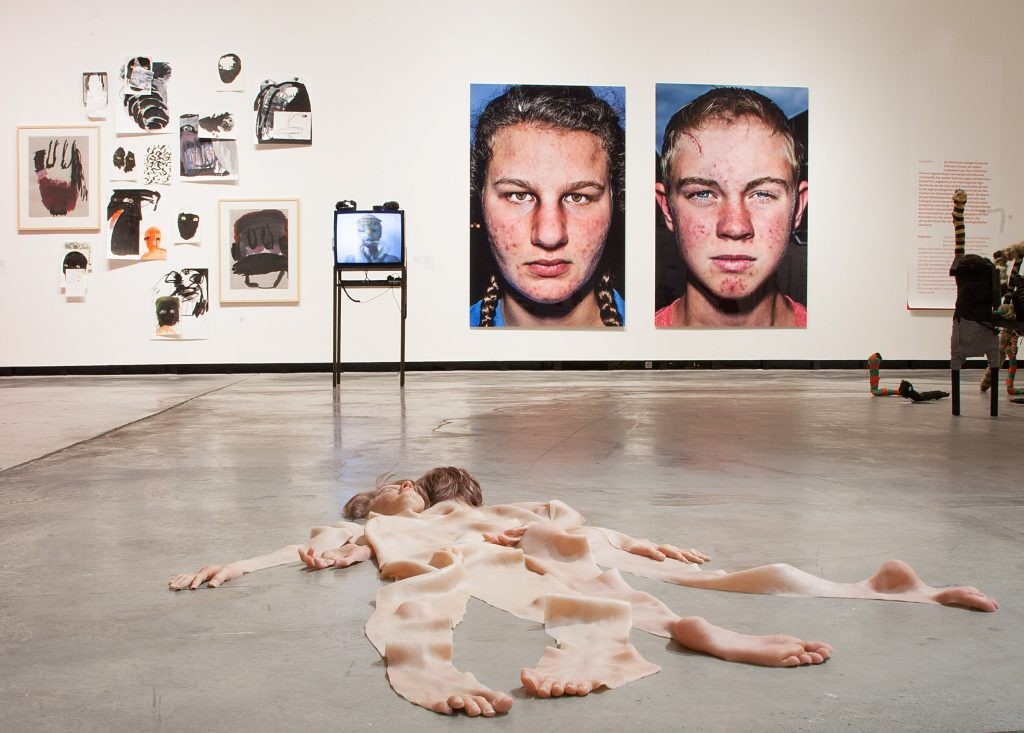 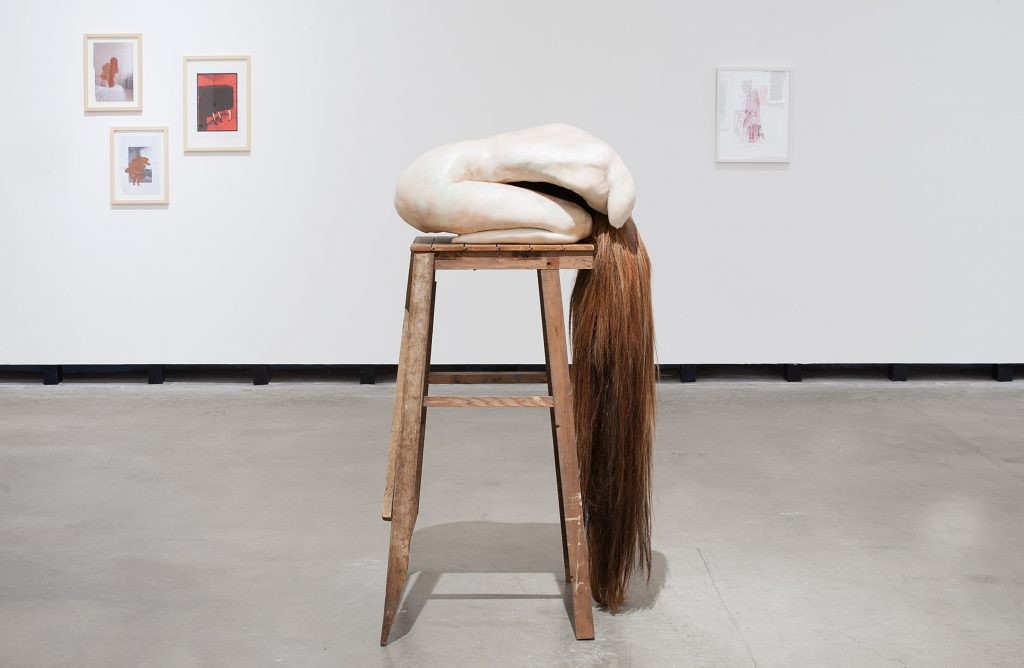 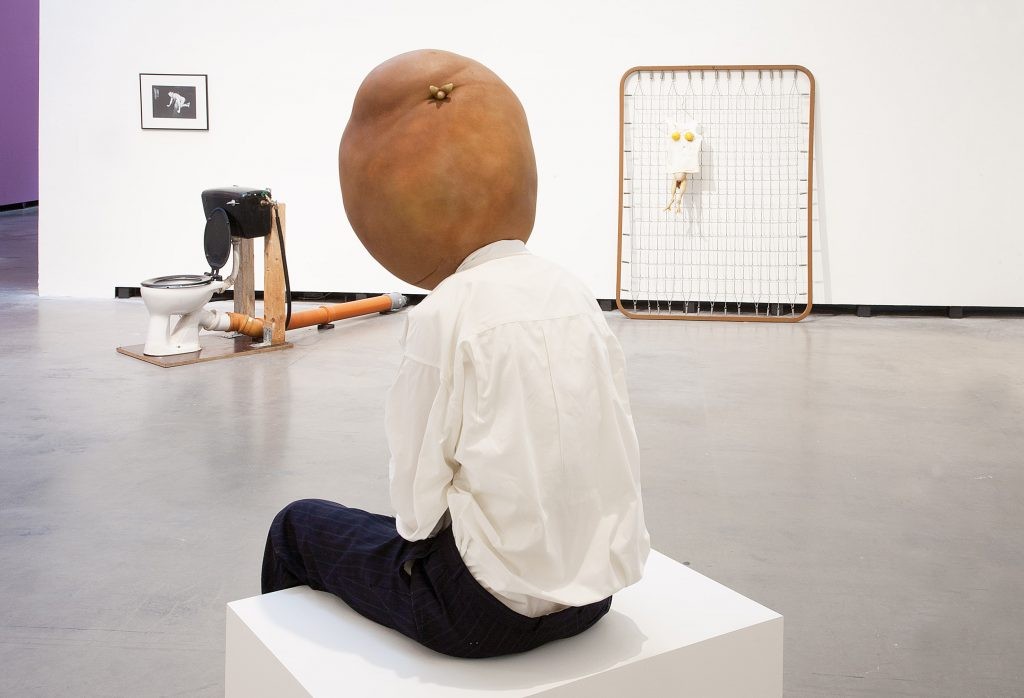 Hardly any other emotion has such a profound effect on the person concerned as shame. But what can even be still regarded as shameful or provocative in our modern media age? In “The inner skin – art and shame” at the Marta Herford, more than 50 international artists address their own shame boundaries and those of the observer. On the basis of more than 100 works – including paintings, drawings, photographs, sculptures, video installations and performances – they investigate this emotion in terms of social and individual conventions. The roll of the artist varies from sensi-tive observer to radical provocateur, right up to pushing the limits of self-irony.

„Beauty, even in art, is not possible without shame.“
Hugo von Hofmannsthal
Shame is an emotion anchored in the body which is triggered by certain stimuli. It can cause physical reactions such as reddening of the skin, trembling or a faster heartbeat. When and why we experience shame varies from person to person, and depends to a large extent on the social environment. Age and gender, education, belief systems, cultural background and individual experiences are all factors that will influence this emotion.
In a sensuous, moving and humorous way, the mainly contemporary works are divided into four theme areas. In the entrance gallery, the focus is initially on the visitor. A large stand-up mirror forces him to perceive himself. Am I ashamed of what I see or does it fascinate me? A decisive question which can be asked again and again in all of the rooms. The installation “Four participants and various scenarios of a shameful situation” by Eva Kotátková is about how we deal with shameful situations, but also about the liberation from social restraints. A puppeteer stages a puppet show on a stage-like podium at regular intervals during the exhibition. The figures engage with each other and create social constellations that follow a script that the visitor can also influence within a specified framework.

Paradise and puberty
With Albrecht Dürer’s “Adam and Eve”, the exhibition draws attention to the long tradition of the representation of shame in art. The banishment from the Garden of Eden marks the end of man’s state of innocence in paradise, and Adam and Eve become ashamed of their naked-ness. Puberty represents a similar upheaval: here again the individual has to engage intensive-ly with his identity, and becomes more deeply conscious of what is shameful. In the photo-graphs by Rineke Dijkstra, the teenagers look insecure and obviously feel observed. Bruce Gilden on the other hand, with his over-dimensional portraits “Jamie” and “Julie”, shows exactly what people are trying to hide in this phase of their lives: faces marked by hormonal changes. In Michaël Borreman’s “The Unicorn”, the visitor is unwillingly transformed into a kind of voyeur who is entertained by the shame of others. The “self-portrait as a child” by Clemens Krauss has almost exhibitionistic features. The artist alludes to the moulting of his own skin by creating a hyper-realistic replica of his own teenage skin with silicone and real hair.

Veiling and revealing
The feeling of shame can also occur when there is an intrusion on one’s intimate or private sphere. Jamie Isenstein’s look through a keyhole plays with the curiosity of humans and the desire to discover other peoples’ secrets. With his performance “En somme” (Asleep) No. 44, Virgile Novarina reveals the intimate moment of sleeping and dreaming. Using a technique he developed himself, he can alternate to a waking phase and quickly note down perceptions that occurred in the deep-sleep phase. Another form of revelation can be seen in the photograph “Vivienne Westwood, No. 1, London” by Juergen Teller. Borrowing from Édouard Manet’s scandalous “Olympia”, he presents the fashion designer completely naked and in a self-confident pose. The work “MARE NOSTRUM” (Our sea) by the documenta artist Miriam Cahn is deeply moving, referencing the current refugee situation in the Mediterranean. The pale human bodies are shown covered, but at the same time exposed.
In the next room the visitor can fulfil the desire to take a look behind the scenes: the movie “Deep Gold” by Julian Rosefeldt is shown on a large screen. Here the protagonist moves like in a dream through Berlin of the 1920s.

Norm and exclusion
Social acceptance is defined on the basis of compliance with certain norms. Deviations in one’s sexuality, or in one’s outward appearance due to age, illness, origin or poverty, are often a source of shame. While Ulf Aminde’s private slide show “Lust” tells about the withdrawn and apparently depraved life of his cousin, a photograph of the eccentric designer and artist Leigh Bowery highlights gender boundaries and the conventional beauty ideal. Berlinde de Bruyckere “hides” her sculpture from the eyes of the observer with several blankets. The scene appears humorous and oppressive at the same time.

Humour and provocation
Particularly in the 1960s, artists begin to engage with the social norms and with the construc-tion of gender and sexuality. By breaking through shame boundaries they liberate themselves from the prevailing constraints. The fact that, alongside provocation, humour is the driving factor in the attempt to counteract perceived shame is demonstrated here by, among others, the artist Sarah Lucas: the functioning toilet with the title “The Great Flood” makes the intimate act of going to the toilet public. With “Hair” and “Sperm”, Gary Schneider created a genetic and at the same time very intimate self-portrait: the artist used microscopes and other imaging techniques to greatly enlarge these body constituents. With her light installation, “Fuck Off And Die You Slag”, artist Tracey Emin – who was once called by “Der Spiegel” weekly news magazine the “Queen of Shameless” – turns the whole gallery red in several senses of the word.